Now Reading:culture | The Very First Thing Bought On The Internet Was A Big Bag Of Weed 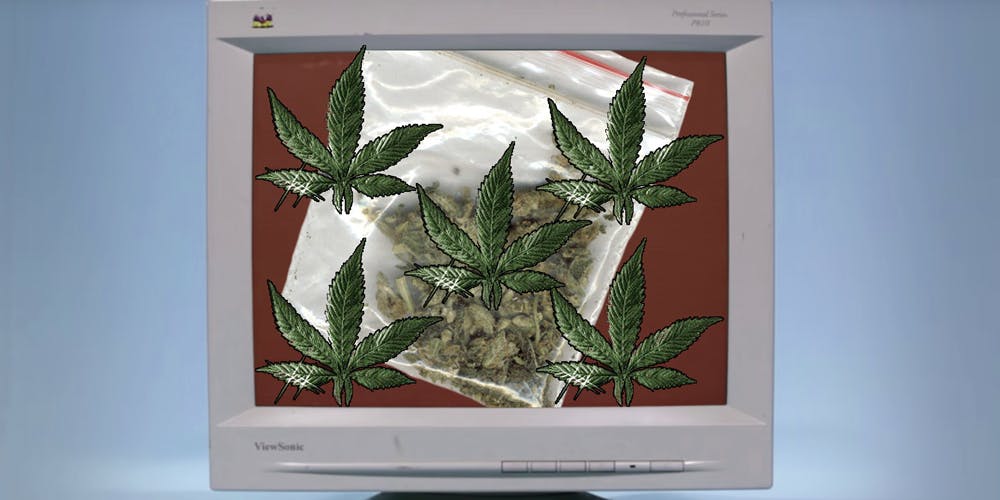 Long before Amazon or eBay, Stanford students used the internet to solicit a big bag of weed from college-dealers 3128 miles away at MIT.

Pop quiz. What do you think was the first thing purchased online? Pornography? Too predictable. A collectible The Last American Hero set of bedsheets? Believe it or not- no, but an inspired choice.

While most people recognize the 90s as the dawn of the world wide web, what with all those Beanie Babies on eBay and Britney Spears debasing Flash games on Newgrounds, the internet (or something close enough to it) has existed since the late 60s. And what would the 60s pioneers of the web use this world-altering resource for? They were using it for some of that good green.

According to his book, What the Dormouse Said: How the Sixties Counterculture Shaped the Personal Computer Industry, John Markoff wrote that students at Stanford were using the ARPANET, a computer network connecting American universities, to solicit weed from some college-dealers across the coast at MIT.

“Before Amazon, before eBay,” writes Markoff, “the seminal act of e-commerce was a drug deal. The students used the network to quietly arrange the sale of an undetermined amount of marijuana.”

In 1982, guidelines were placed upon the ARPANET, considering any non-official use illegal. “Sending electronic mail over the ARPANet for commercial profit or political purposes is both anti-social and illegal,” wrote the at least half-right ARPANET guideline. By this point, other networked computing systems had begun to emerge.

Of course, as you may know, ARPANET was far from the last time internet users would try to score some narcotics. Aside from Transformers webrings, drugs would become a cornerstone of the net. Some believe the internet drug trade is creating new drugs by the dozen from demand and groupthink alone.

The most infamous example of the online drug trade was the Silk Road, a vast network of drug transactions run on the ‘dark web’ by Ross Ulbricht. The US tried to shut the site down for years with no luck. Like Al Capone before him, Ulbricht was undone by an IRS agent. Albeit one who just dicked around on Google over a weekend, successfully linking Silk Road’s moderator ‘Dread Pirate Roberts’ to Ulbricht through some old forum posts. Ulbricht was arrested in 2013 for trafficking, laundering and even hiring assassins.

Like all things online, drugs sure escalated quickly. As the cannabis trade moves into the legal market, it will hopefully enter the economy with the most efficient tech available. Many growers and sellers are using blockchains to secure their commerce, a fine improvement from the hardware of 40 years prior. Markoff believes the ARPANET trade went down between 1971-1972. In his book The Dark Net, Jamie Bartlett narrowed it down to 1972. But the ARPANET drug deal is contested in its status as the first online transaction. That might be a matter of semantics or simply a PR stunt.

Pizza Hut believes the title belongs to them, having launched the PizzaNet service in 1994. They claim the first online purchase was a large pepperoni pizza with mushrooms and extra cheese, delivered in Santa Cruz (treat yourself to this LA Times article from 1994 comparing the pizza purchase to the dystopian cyberpunk thriller Snow Crash). Stuffed crust and a bag of weed would make a dandy combo, but it gets more complicated.

A video from Shopify argues that because Stanford’s pot purchase was illegal and may not have exchanged legal tender. They say it wasn’t the first online transaction per se, and that the trailblazing purchase shouldn’t count. Shopify also says that Pizza Hut shouldn’t gloat so much either. They narrow down the first legitimate purchase down to a UK grandmother using the VIDEO TEX service in 1984 to buy groceries or a 1994 purchase of a copy of Sting’s album Ten Summoner’s Tales.

So there you have it. The first thing bought online was either Colombian Gold, Fields of Gold, Gold ‘n Soft or Pizza Hut. Either way, hell of an evening.