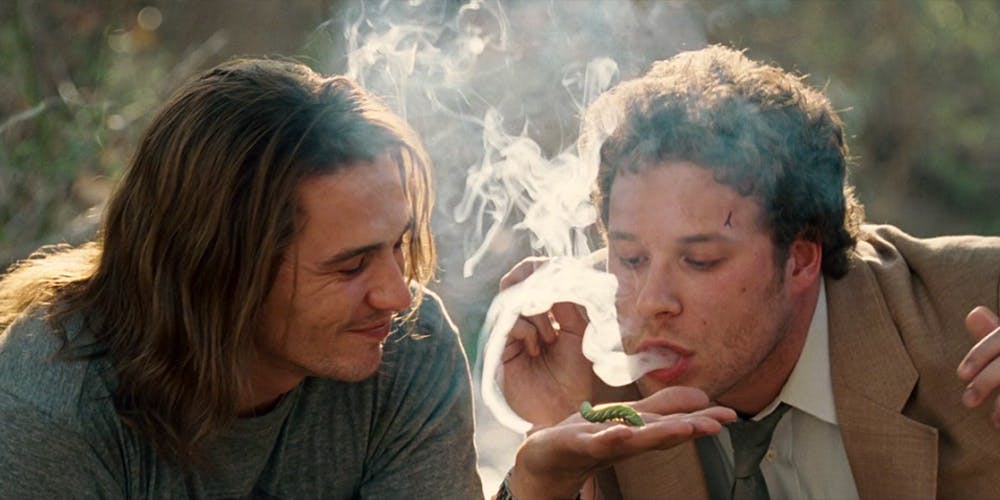 The pot-loving pals have both taken their fair share of bong-shaped trophies home from the “Stony Awards.” Yes, that’s a thing.

There’s probably no greater bromance in stonerdom than James Franco and Seth Rogen. And since they’re not likely to give us another Christmas classic like The Night Before in time for the holidays, this year we’ll take whatever festive canna-humor we can get. Which brings us to the stage of Saturday Night Live.

When James Franco hosted SNL last Saturday, he took questions from the crowd and the segment was quickly highjacked by Rogen who used an audience member to ask a question.

“She wants to know how come you’ve hosted four times and Seth Rogen has only hosted twice?” Rogen asked, raising the hand of a woman in the audience.

“They’re called Stony’s,” Rogen shoots back, as the two continue to speak through the audience member like passive aggressive roommates, “Which is a hilarious play on the word Tony’s and that they are as prestigious as an Oscar, plus when you win you get a bag of weed.”

“Seth, I’m sorry,” Franco finally says, “there’s a rule that only one stoner can host a season and that’s me.”

But Rogen wasn’t joking. The Stony Awards is actually a thing and the duo have taken home their fair share of trophies. It’s put on annually and sometimes features just an article by High Times celebrating the “highest and stoniest movies” of the year.

The winners of the award receive a bong-shaped trophy and (possibly) even a bag of weed, as Rogen suggests. We don’t know what goes on backstage, but we’d like to think Rogen always has a bag of weed on him regardless of where he got it. Rogen and Franco have also each won Stoner of the Year awards, joining a list of entertainers which includes Snoop Dogg and Bill Murray. As for their films, Knocked Up and Pineapple Express each won the Best Comedy award in 2007 and 2008.