I Tried Ganja Yoga and It Nearly Killed Me

As my limbs knotted and sweat beaded down my forehead, I began seeing stars. I couldn’t tell if I was just way too high or slowly dying. 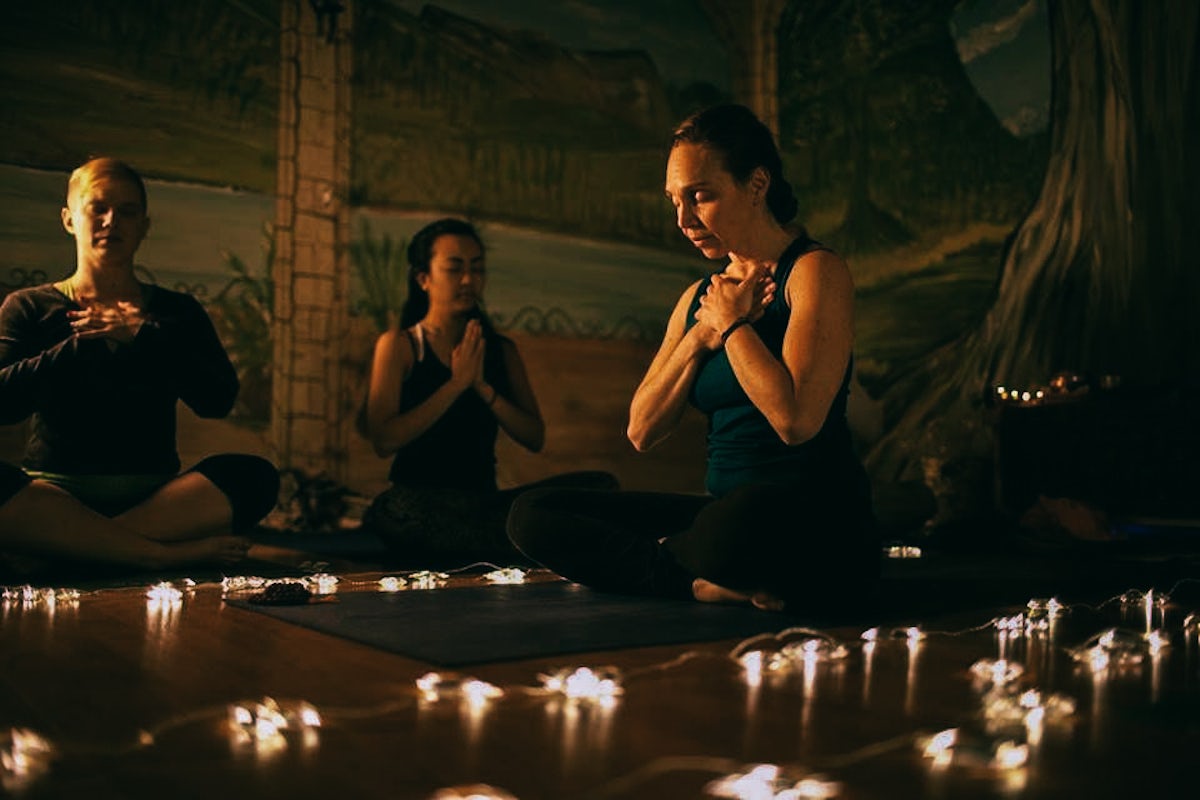 As soon as you walk in, It’s obvious the House of Yoga isn’t an average yoga studio. In front of the actual studio is a wall with bongs and pipes for sale. I thought a weed-friendly weed studio would be a nice and easy workout. I was totally wrong.

When I first walked in the door, Lu, a small and warm woman welcomed me like I was an old friend. She warned me before I walked past the bongs and pipes, “this is my advanced class.”

As I was taking my shoes off, Jimmy, who also teaches classes at House of Yoga, asked me how much experience with yoga I have. His face twisted a little when I said I’ve never done a class. “Well, this class can get a little intense,” he winced.

Jimmy had a Volcano vaporizer filling bag after bag and was passing them around as people loosened up. The man on the mat next to mine was shredded and flexible. His forearm muscles were slightly larger then my thighs, I figured he’d be able to tell me truthfully how much trouble I was in. I asked if he had done a lot of yoga. He told me he goes to multiple studios a week and tries to hit pop-up yoga sessions whenever he can. “This is one of the hardest classes in the city.

It was somewhere between that conversation and my fourth or fifth hit from the volcano bag when I thought I may be in over my head.

Just then, Lu started the class. Before the class, I worried that a self-described ‘ganja friendly’ yoga studio would be heavy in hippie philosophy. This was not the case. Almost immediately, we contorted into to difficult poses, knotting out limbs into even more difficult ones as the two hours went on.

About six minutes in I saw sweat run down my nose and drip against my mat. After the first 20 minutes, I had given up on thinking at all and focused on keeping my body in whatever twisted position Lu asked. We smoked a mild sativa before the class, but if I was still high from that, I didn’t notice anymore. Occasionally I would see stars as we moved from on position to another. Ganja yoga was kicking my ass.

We had finished the hard work, and I could hear the Volcano whirl back to life. The next strain was a heavy indica. Lu turned the lights off so the room was almost pitch black. Tired, sore and sweaty, we all passed the volcano bags around.

The lights came up, and slowly people started wiping down their mats. I thought I may have hurt my back somewhere in the tornado of positions I contorted into, but it was just a muscle group I was previously unaware of.

I learned after that there are a few different classes during the week that are nowhere near as insane. Johnny told me that Lu’s class is mostly for athletes. The house of Yoga has yoga classes for all levels, even ones for people who don’t smoke weed at all.

Lu has been into yoga for more than a decade. She didn’t smoke weed until six years ago when a friend of hers invited her to smoke weed and do yoga when she ran a ganja friendly studio out of her home. That friend moved to California, so now Lu carries the torch in Toronto.

“The first time I smoked ganja and did yoga it blew my mind, it was like I could really feel my entire body,” she told me after the class. To Lu, smoking weed is a “short, spiritual ceremony that helps a class loosen up and really focus on their bodies.” It did work this way for me, at least at first. I was less self-conscious about how bad I was at yoga with a little comfort from weed. One woman who takes Lu’s advanced class regularly told me, “Normal studios feel stuffy to me now.”

Of course, Lu had to wait a little while before she told me all of this. When I first stood upright for the first time in two hours, after a few heavy hits from the volcano bag, she asked me if I liked it. I was soaking wet, having trouble standing on my legs, and totally disoriented and gasping for air like a newborn giraffe. I groaned and smiled. She laughed and looked like she had seen the expression before.

Enjoy the latest and greatest from Herb, enter your email below to get exciting cannabis updates delivered to your inbox.
November 18, 2017 — Last Updated January 08, 2020
Written by Erik McLaren