Finally, your Sims character can get high

One of the most iconic games of our generation now has weed. 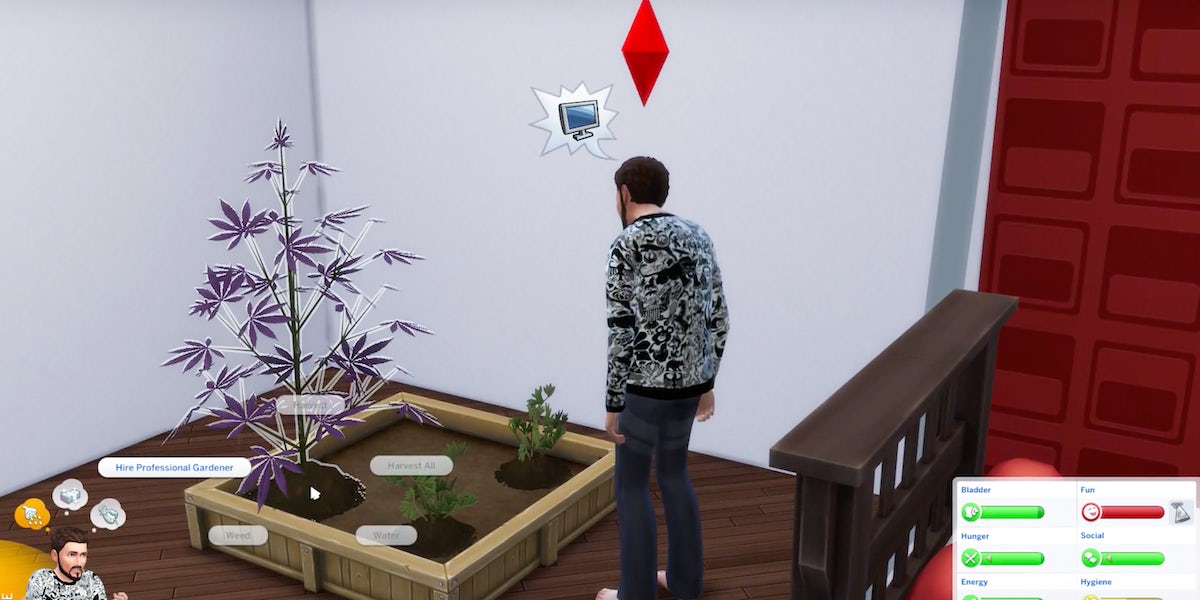 Since debuting in 2000, The Sims has gone on to become one of the most successful video games of all time. Millions of players around the world have used the game to do very normal things like building their Sims eighteen kitchens and no bedroom, furiously trying to get two virtual dolls to have PG-13 sex or trapping Sims in a room without doors. One thing the game has never allowed for is smoking weed. Now, one game modder has decided to right this wrong—and he’s making some serious cash doing it.

Filip (no last name given) only picked up on The Sims last May, mostly for ideas on a kitchen redesign. He wasn’t the first modder in the world to add drugs to the game—encountering other drug mods got him thinking about it. The available content was strictly decorative, allowing players to leave paraphernalia and drugs on the counter, like the morning after a house party. He started by trying to reprogram the game to allow players to actually snort a line of coke.

Six months in, Filip has created a mod called Basemental, which drops drugs into The Sims world like the CIA did in communities throughout the 80s. Basemental introduced four drugs to the game: MDMA, cocaine, adderall and weed. The creator said he doesn’t feel like adding heroin, despite requests.

The drugs are more than just consumable odds and ends. Each will have an effect on the Sims characters’ mood, energy and productivity, having them stay up partying all night or making them sleepy. In order to buy drugs, a drug dealer has to live somewhere nearby. Sims can also take up dealing themselves, and make it their source of income. Overdoses, both fatal and non-fatal, can occur, which is unsettling until you remember how many Sims died because you thought` it’d be funny to see their bed on fire.

“I don’t really want to make this mod into a glorification of drug use,” Filip told Kotaku, “that’s why it’s important to have an addiction system, fatal and non-fatal drug use.”

Even if Filip doesn’t condone drugs, he’s making some pretty cool cash selling digital ones. Making money off mods isn’t easy since Steam, the most popular storefront for PC games and mods database, doesn’t allow modders to charge on their platform. Filip’s mod is available through his own hosted site, but it was only after a suggestion by a fan that he started charging for his efforts. He started a Patreon and, before long, he started making more than $6,000 a month making weed smoking Sims possible.

“It’s really nice to get not just great feedback from people that love playing with it,” said Filip, “but also some money back from it, which obviously inspires me to just keep on working with it.”

Maybe, in no time, we can teach our Sims how to cure weed or how to make a bong.

Get 20% off premium weed and discover the latest products, news, and deals in cannabis.
February 22, 2018 — Last Updated
Written by Zack Kotzer