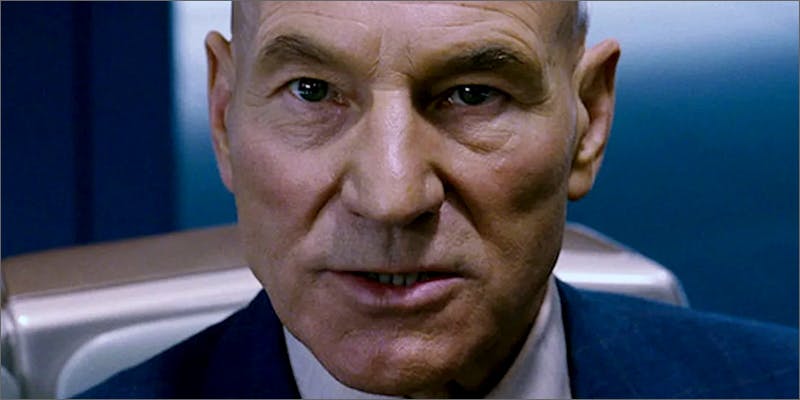 Planning on seeing Logan this weekend? Sir Patrick Stewart has just come out as a cannabis lover. Here’s what he had to say about cannabis and his new film.

Six decades of film, stage, and television watchers have grown up with Sir Patrick Stewart. The British actor famous for his major roles in Star Trek and X-Men, Stewart has recently come forward about using a cannabis product for relief. In a recent interview with Esquire, he mentions he uses a cannabis product to heal his hands while aging. While using cannabis for pain and other aging side effects is nothing new, Stewart’s delivery method is unique.

Recently, Sir Patrick Stewart sat down with Esquire and shared his thoughts on life, aging, President Trump, and, surprisingly, cannabis. Stewart admitted that cannabis is something he uses to help him along in the aging process. At 76 years old, the iconic actor finds himself thinking more and more about aging. He muses,

I think about it everyday. Not all the time. I’m not brooding on it, but I’ve come to a point where the numbers are against you. Physical things [make me feel old]. You get to an age where you go to the doctor, you tell him how old you are and he just shrugs his shoulders and says: “Oh, is that it?”

Like many aging adults, Stewart has started to have problems with his hands. Interestingly, one of tools he uses to manage his symptoms is cannabis. He tells Esquire,

I mean, my main problem is my hands don’t work very well. But thanks to cannabis, they work much better than they used to. Thanks to the law in California now, it’s just a spray that I put on.

Yes, Sir Patrick Steward just admitted that he uses a topical cannabis spray to heal his hands. When Stewart was asked what he did when he travels back to the U.K, he responded with a straightforward, “I can’t answer that question.”

Gearing up for the launch of Logan

Sir Patrick Stewart’s interview set the stage for the launch of Logan, which is the 10th installment of the Wolverine series. In Logan, Stewart plays a Professor Charles Xavier that has been eaten up by a degenerative brain disorder. In perhaps a bit of a separation from previous X-Men

In perhaps a bit of a separation from previous X-Men movies, Logan dives into the private life and mind of an aging man. Overall, this is a valuable trait for Stewart. He explains,

It’s not turned out to be your typical superhero blockbuster, especially in relation to Logan himself. What’s happening to him is so intense, dark and private. And it’s got loads of violent action, trains and cars. I think it’s terrific, and I’m very proud of it.

The film, however, has also turned out to be a political one, though unintentionally.

The primary objective of the principle characters in this movie is to get to a border and get across to safety, because where they are, their lives are constantly at risk.

I’m sure when the writers began putting together there was no intention to make a political movie, it just so happens we have made one. We’ve got a guy in the Oval office who wants to slam gates, shut people out, deport people in thousands, and build a huge wall.

Political or not, in one short interview, Stewart has touched upon some of the most delicate topics in society: aging, cannabis, and one of the most controversial elections in U.S. history. Logan will be launching on March third and is sure to be action-packed and thought-provoking.