Now Reading:culture | Snoop Spills The Beans On Getting High With Martha Stewart 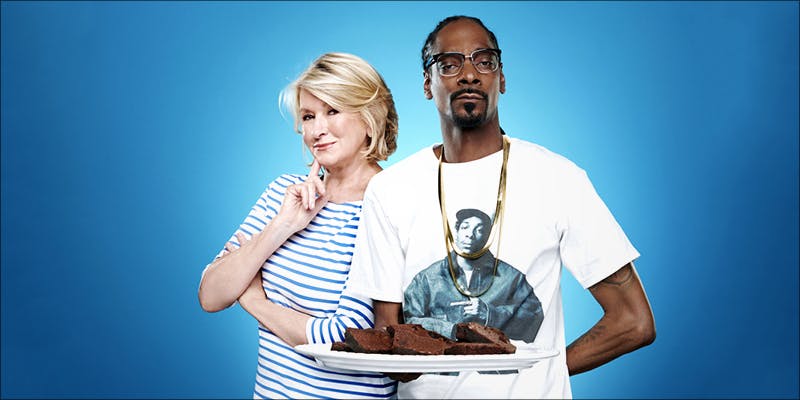 Snoop Spills The Beans On Getting High With Martha Stewart

The biggest question everyone had when Snoop Dogg and Martha Stewart first launched their cooking show was, does Martha get high with Snoop?

Everyone knows that Snoop Dogg and Martha Stewart are tight. They have a cooking show together, after all. And while it may be easy to assume that Snoop would try to encourage Martha to light up, it’s apparently Martha that’s doing all the peer-pressuring. As it turns out, Martha prefers cocktails over the green stuff. Snoop isn’t much of a drinker, but that doesn’t stop Martha from trying to get him drunk. During the clip from Jimmy Kimmel Live!, Snoop discusses making pot brownies with Martha and talks about his relationship with her on set. Be sure to check it out in the video below.

Martha won’t get high with Snoop, but she will get him drunk

The biggest question everyone had when Snoop Dogg and Martha Stewart first launched their cooking show was, does Martha get high with Snoop? As it turns out, Snoop isn’t the one influencing Martha to smoke weed. It’s Martha that’s doing all the peer-pressuring, only with alcohol.

During the video from Jimmy Kimmel Live!, Snoop talks about Martha’s love for alcohol, and how she consistently tries to get him drunk,

[S]he forces me to drink alcohol everyday on the show with her.

After Jimmy had asked Snoop if he drinks, the Doggfather admitted he’s not much on drinking but doesn’t have much of a choice when he hangs out with Martha,

No, I don’t drink anymore. But with her, I have to drink.

You would think that since Snoop drinks with Martha that Martha would smoke a J or two with him. Fair is fair. But apparently, he’s still working on making that dream a reality,

We’re working on that.