Now Reading:culture | This Guy Drilled A Hole In His Skull To Stay High Forever 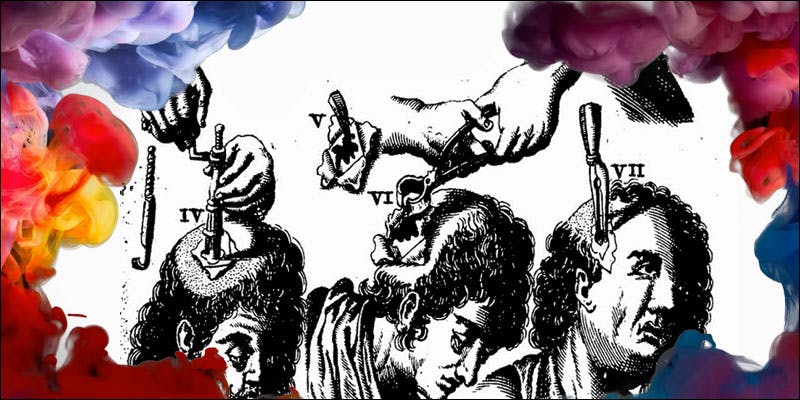 Check out the guy who drilled 3 different holes in his skull to try and manipulate the way he could stay high forever. It’s a pretty out-there experiment.

Just before Joe Mullen was supposed to join his father’s investment firms, he had read an Aldous Huxley novel that had changed everything for him. Instead of preparing for his final exams at Oxford, Mellen was smoking huge quantities of cannabis and trying to figure out how to venture away from his parent’s much too traditional approach on his life and career, and instead work out a way he could stay high forever. That’s when things started to get weird.

Trepanning is an ancient surgical technique used to rid the brain of pressure and “bad spirits.” In earlier civilizations, trepanning was used to expose the “dura matter” of the brain to try and treat various illnesses and intracranial conditions.

Joe Mellen had attempted this procedure by himself not once, not twice, but three times over the course of his early life.  The dedication that Mellen has for this procedure is outlined in the book that he wrote during the 70’s, “Bore Hole.”

If you are used to autobiographies that slowly encapsulate you into the author’s life story, then this book will surely be something new. Mellen brings you along on the journey of his life throughout his times of doing acid and surviving the psychedelic 60’s.  Even the first sentence of his novel displays how the memoir is unlike anything else ever written.

This is the story of how I came to drill a hole in my head to get permanently high.- Joe Mellen’s “Bore Hole”

Rationale behind the procedure

Mellen had a different explanation for the benefits of trepanning, as he outlined in a recent interview with VICE. His argument from past experience delves into the brain as a miraculous organ that can be heightened by certain manipulations like trepanation. However crazy it sounds to drill a hole into your skull, Mellen’s explanation for the end result makes quite a bit of sense.

While we would never recommend you to perform brain surgery on yourself, we can confidently say that cannabis can elevate your consciousness in a great way. It can give you that same objective view that trepanning will provide, without giving you the obvious side effects of drilling a hole in your own skull.

Have you heard of trepanning before? Did you know that a procedure like this could actually affect the way you perceive the world? Would you like to stay high forever? Join the discussion on social media or in the comments below!