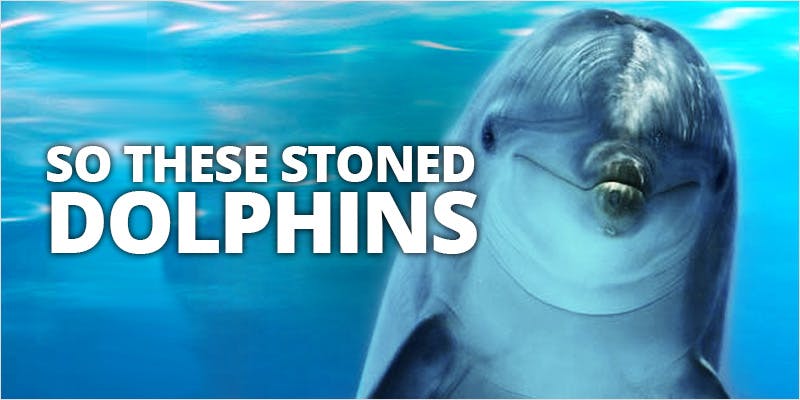 In a new BBC documentary dolphins are displaying behaviors that looks a lot like getting stoned under water!

Puff, puff pass might not be an etiquette that is only used by humans, apparently. According to a BBC documentary called Dolphins: Spy in the Pod, dolphins might also exercise the puff, puff, pass routine. However, smoking a joint could be extremely difficult underwater, especially for operating a lighter with a fin. This documentary suggests that dolphins are using other sea creatures to get high.

Altering states of consciousness has long been accepted as a trait of human behavior, and it has been observed a lot among other mammals. But who knew that dolphins were also in the business of getting high? We can now add getting stoned to the list of other very human behaviors that dolphins have, such as bullying and sex for pleasure. Watch the video below.

Stoned and puffing on the puffer fish

The documentary shows some of the dolphins “passing around” a puffer fish and then exhibiting some very strange behaviors afterward. They toy with the puffer fish, passing it around to each other, and they seem to be experimenting with the taste or texture, or perhaps puffing it for a toxic chemical that it uses to ward off predators.

Rob Pilley, a zoologist and a producer of the documentary says, “After chewing the puffer and gently passing it round, they began acting most peculiarly, hanging around with their noses at the surface as if fascinated by their own reflection.” It certainly sounds like behavior that might be inspired by a few really strong tokes.

So then the question is whether or not these dolphins are actually using the puffer fish to get high. Dolphins are extremely intelligent creatures, and so it can’t be put past them to want to experiment with different states of consciousness. So is the chemical emitted by puffer fish a potential intoxicant for dolphins?

Puffer fish release a chemical called tetrodotoxin (TTX) to ward off potential predators in the ocean. However, this chemical is not identified as breaking the blood brain barrier, so it actually has no effect on the brain. In low dosages, TTX causes numbness in the body. In large doses, it can cause paralysis, and is a known cause for death in certain parts of the world. But how does this pertain to the dolphin? Of course, all of the information we have is about the effect of this chemical on humans rather than its effect on dolphins.

There is nothing to say that the dolphins aren’t experiencing some kind of mild stone from sucking on the puffer fish, and given the habits of dolphins, it’s entirely possible. If it is true, then dolphins have certainly taken the phrase of puff, puff pass to a whole new level as they puff and pass on the puffer! Check out the clip below to see these dolphins playing around with the puffer fish.

Do you think dolphins are using the puffer fish to get high? Let us know your thoughts on our social media or in the comments section below.