Most of us thought the absurd anti-marijuana campaigns were a thing of the past, but apparently not… 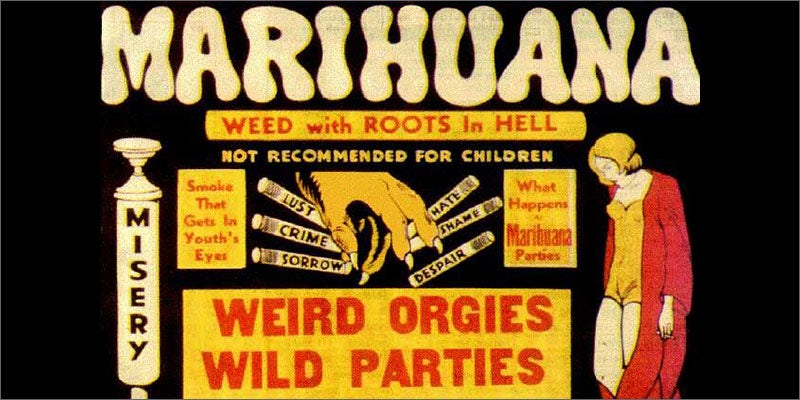 Most of us thought the absurd drug propaganda was a thing of the past, but apparently not. There are still anti-marijuana campaigns out there that are more hilarious than they are effective.

People are still trying to brainwash teenagers with extremely stupid propaganda, and we think it has comedic value. So we’ve compiled the five most hilarious modern day anti-marijuana campaign, for you to to have a laugh at!

Last year, Colorado began an anti-marijuana campaign aimed at teenagers called the “Don’t Be A Lab Rat” campaign. They set up enormous, human-sized rat cages in public places to show how terrifying the experience was of using marijuana. Basically, the argument was that with Colorado’s new recreational marijuana policies, teenagers were going to be a testing ground for recreational marijuana use.

Needless to say, the entire project was a fail. People thought they were really cool places to blaze up, in fact. So when Colorado realized how epically it had failed, it began the Good To Know marijuana campaign, teaching teenagers awareness and how to use marijuana responsibly.

Here is a video they released as one of their campaigns.

Canada is the home to one of our hilarious anti-marijuana campaigns, too. Its scare tactic is to terrify both teenagers and parents of the effects that marijuana has on the teenage brain. The commercial warns that marijuana is 300 percent stronger than it was 30 years ago, and that marijuana – it damages a teen for life.

Then, at the end of the 30-second ad, there appears a picture of a brain that is made out of a trippy glass weed pipe! Be careful teenagers, marijuana turns your brain into a glass pipe. From which you can smoke more marijuana!

3. Marijuana makes you flat… not fat

In this ad, a girl who smokes marijuana is depicted as being completely flat. It looks like she has been done over with a steam roller. Maybe the poor girl just smoked the wrong strain, and she probably needs a better sativa to get off the couch.

Although, to be honest, that has never happened to me while smoking weed. Could the creators of this possibly be confusing marijuana with a different drug?

The scare tactic of this seems to be that marijuana doesn’t just make you lazy and tired, it deflates you until your deflated balloon body lays on the couch while your sister talks about how much fun you used to be! 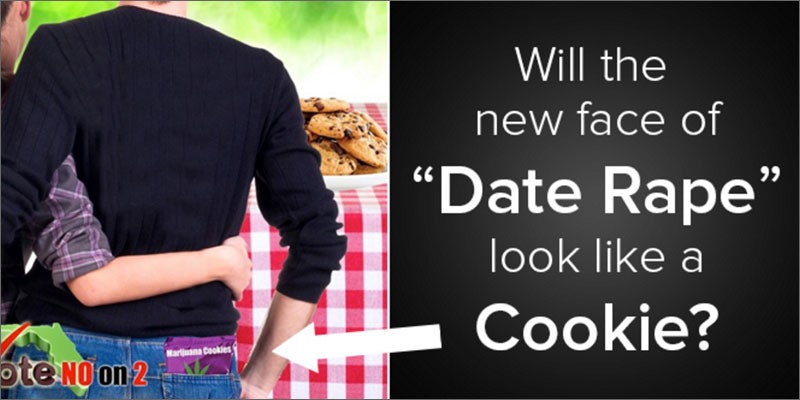 This Florida ad campaign was trying to convince people that marijuana causes date rape. “Will the face of new date rape look like a cookie?”. I don’t think so. That is not an event that occurs in the life cycle of a cookie. No one is ever baking a cookie and thinking about date raping someone.

This ad campaign preys on the poor medical marijuana patients of Florida. Maybe they have cancer. But in between chemotherapy sessions, they are baking cookies and thinking which women they should prey on.

This one hilariously crosses the line so far, they probably can’t see the line from where they are anymore.

5. Legalizing marijuana means the end of the world

Everybody should watch this campaign video. It’s arguably the silliest piece of propaganda you might ever see. This Californian ad campaign by “Save California” suggests that marijuana means the fall of the American civilization. Legalization means a fully waged war, with windows being broken and things being set on fire.

Plus, they include a clip of a Dutch NGO who gives a very compelling argument for the legalization of marijuana. They think that the video works in their favor… But I’m finding myself very much on the affirmative side. I will not be pledging my opposition, thank you California.

We hope you had a good laugh at these hilarious anti-marijuana campaigns. They are obviously ineffective anyhow but are worth a good giggle when you are baked.

Get 20% off premium weed and discover the latest products, news, and deals in cannabis.
November 11, 2015 — Last Updated December 13, 2019
Written by Sera Jane Ghaly