Dronabinol, developed by a pharmaceutical company has been granted Schedule II classification. The cannabis plant, on the other hand, remains Schedule I. 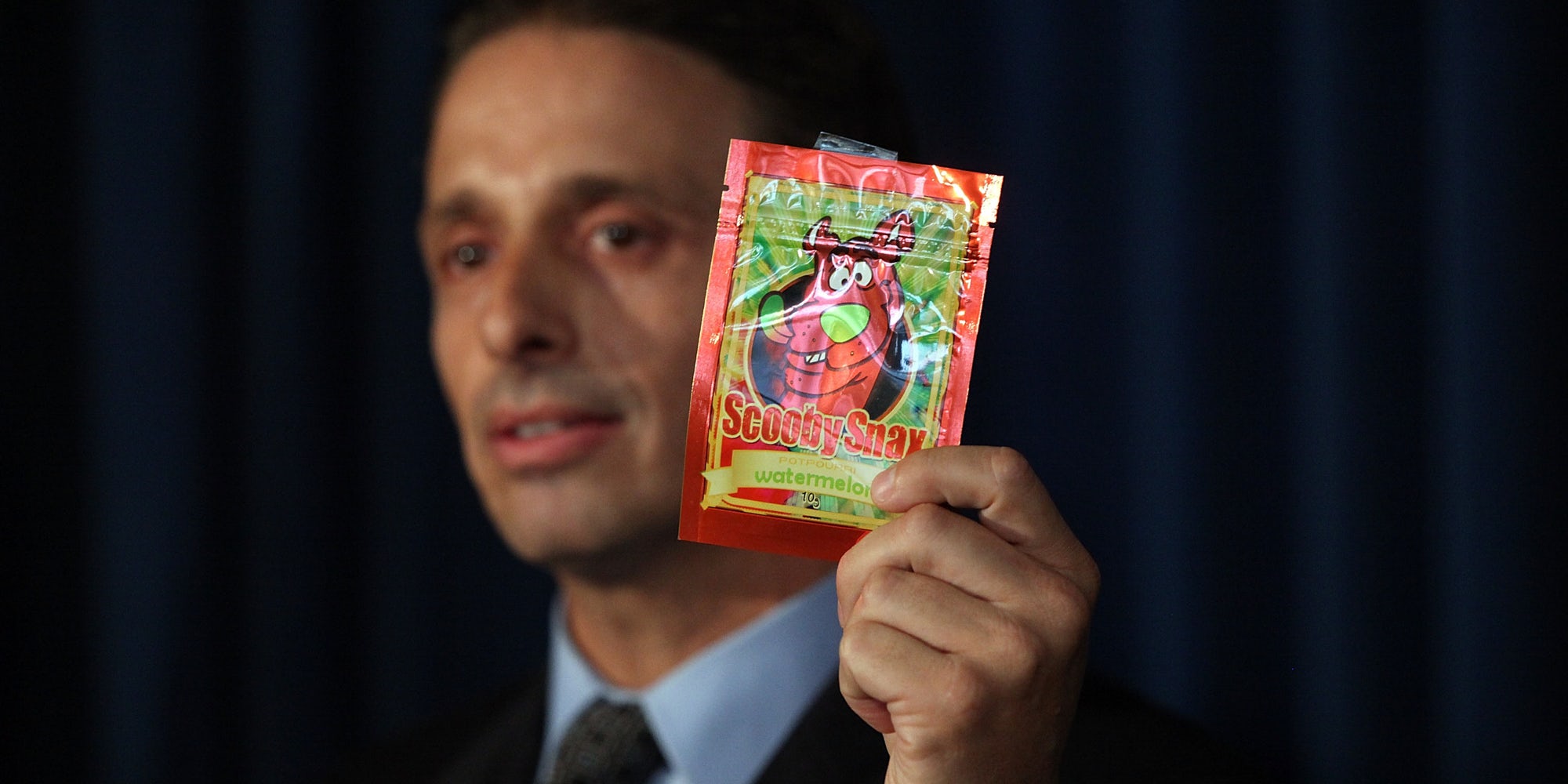 NEW YORK, NY – SEPTEMBER 16: Kieth Kruskall with the Drug Enforcement Administration, holds up a package of synthetic marijuana at a news conference with other law enforcement heads where it was announced that the Federal and New York City authorities have broken up a group that trafficked in synthetic marijuana, known as K2 on September 16, 2015 in New York City. The drug, which has become widely used among New York City?s homeless population, is both cheap and potentially life threatening. Thousands of people have been brought to the city?s hospitals over the last year due to the use of the drug. (Photo by Spencer Platt/Getty Images)

In a historic case of hypocrisy, the DEA has proven that the scheduling of drugs under the Controlled Substances Act is totally arbitrary. It’s long been argued that the classification of substances as conducted by the DEA has been based on a minimal understanding of chemistry or proper facts. Now, the rescheduling of synthetic THC – the main psychoactive component in cannabis – while the plant remains illegal is the final nail in the coffin.

The announcement was made by the DEA the day before Thanksgiving, slipping past the radar of the regular news cycle. Dronabinol also was known as Syndros, a spray developed by pharmaceutical company Insys Therapeutics has been granted Schedule II classification, which recognizes its medicinal potential and allows for it to become a federally regulated prescription drug.

Organic THC, on the other hand, remains under Schedule I, implying that it is potentially dangerous and has no medicinal value. To avoid any confusion between this ‘new’ medicine and organic THC, the DEA quickly shot down any notion of wider rescheduling in its announcement.

In fact, even other forms of Dronabinol will remain illegal, giving Insys the exclusive right to treat cancer patients who experience nausea from chemotherapy with its designer THC.

“[I]t should be noted as a preliminary matter that any form of dronabinol other than in an FDA-approved drug product remains a schedule I controlled substance, and those who handle such material remain subject to the regulatory controls, and administrative, civil, and criminal sanctions, applicable to schedule I controlled substances set forth in the CSA and DEA regulations.”

The restrictions give Insys the freedom to set the price point for its own legal brand of THC, which can range $1,000 to $2,000 for a month’s supply.

The rescheduling had been expected for a few months after the substance, known as delta-9-THC, was approved by the FDA over the summer.

The DEA’s noted that its rescheduling had received some criticism outlining the hypocrisy of allowing synthetic THC to be prescribed while the real deal remains in the most restrictive category.

The statement overlooks numerous studies conducted by some of the country’s most respected institutions in recent years which suggest cannabis does, in fact, have medicinal value.

Others who filed official comments with the DEA suggested that the pharmaceutical companies are interested in profits over the wellbeing of patients. It’s a claim that might border on conspiracy if it wasn’t for the shoddy reputation Insys has developed as the opioid crisis worsens.

As recently as October, Insys founder Dr. John N. Kapoor stepped down after charges were filed against him alleging that he bribed doctors to prescribe a fentanyl product produced by Insys. That product is a Transmucosal Immediate Release Fentanyl known as Subsys which was meant to cancer patients but prescribed widely to those who did not have cancer.

“Insys engaged in a nationwide scheme,” Arizona Attorney General, Mark Brnovich alleged in a consumer fraud filing, “in which it deceived insurers, patients, and doctors. Insys lied to insurers, concealed key facts from doctors and patients, and paid doctors sham “speaker fees” in exchange for writing prescriptions, all to increase the sales of Subsys, without regard for the health and safety of patients.”

In September, Insys addressed the lawsuit filed by the Arizona AG by saying that much of their shady practices were taken out of context.

“I am confident that I have committed no crimes and believe I will be fully vindicated after the trail,” Kapoor said in his resignation letter.

The statement stands in contrast to a wide-ranging Congressional investigation which found that Insys was not only bringing doctors to miss-prescribe its medication but alleged that it might also be responsible for overdoses.

Also in the works at Insys, is a synthetic version of Cannabidiol to treat a variety of ailments in children. That substance, which is also an oral solution, is currently in various stages of clinical trials in the FDA’s approval process. It suggests that Insys is interested in offering all the benefits of cannabis – which is great for patients – but also brings into question whether all of the chemical components of cannabis might be legalized before the actual plant.

Get 20% off premium weed and discover the latest products, news, and deals in cannabis.
November 25, 2017 — Last Updated December 11, 2019
Written by Miroslav Tomoski