Drug Dog Sniffs Out $10 Million of Weed Headed to Chicago

The pot was being transported from California. 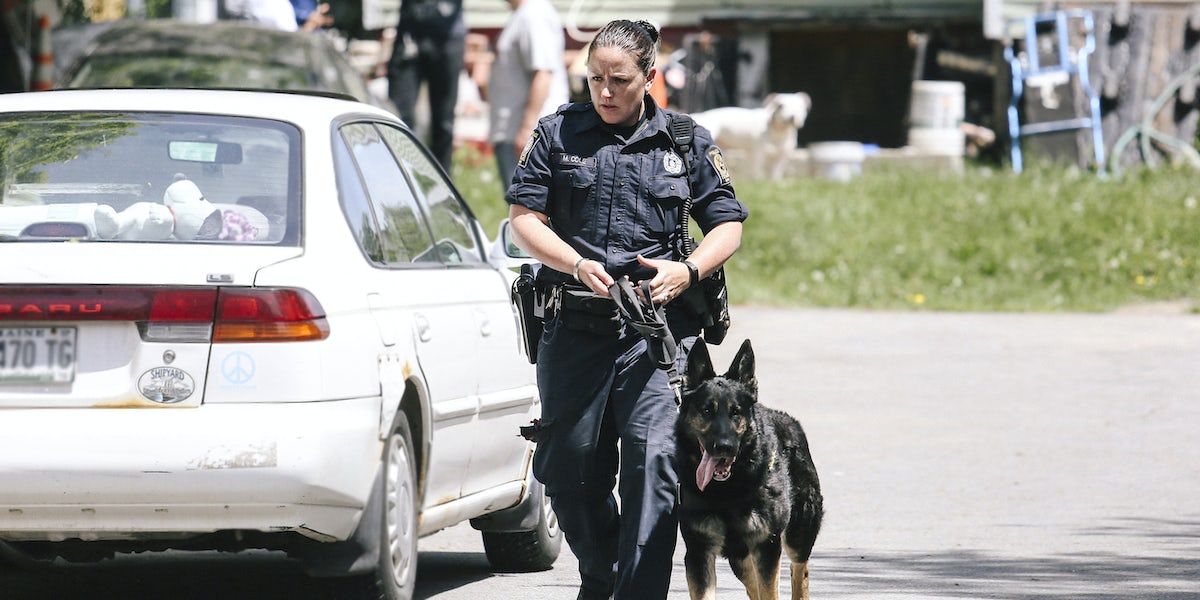 PORTLAND, ME – MAY 26: Portland K-9 unit officer Michelle Cole leads a police dog outside a home in East Deering that police searched in Portland, ME on Tuesday, May 26, 2015. (Photo by Whitney Hayward/Portland Press Herald via Getty Images)

Chicago’s drug dogs still have plenty of work to do despite what certain members of Illinois law enforcement might claim. Jayda, a drug dog from Matteson, sniffed out $10 million worth of cannabis this week as part of a big cannabis bust focused on organized crime, reports CBS Chicago.

As you can see, the drug dog discovered a whole lot of pot. Over 5000 grams, according to the Chicago Police Department. The cannabis was transported from California by Jason Tanner of Lakehead. The 42-year-old was arrested and charged with possession; his bail is $50,000.

Illinois’ K9s made headlines recently when the training director of a drug dog academy in Illinois claimed that recreational legalization would force the cops to euthanize hundreds of dogs, because those dogs cannot be retrained and could alert handlers about legal cannabis, resulting in illegal searches. Certainly, legalizing cannabis would stem the flow of trafficked pot from California, as there would be no need for high-priced imports anymore, but not everyone agrees that that means dogs have to die.

Contrary to the trainer’s claim, a drug dog can actually be retrained and the process has already begun in legal states like Washington. As Sean Whitcomb, director of communications for the Seattle Police Department put it in GreenState, “Imagine you’re in an orchestra and you can play the violin, viola, and cello. Now imagine you stop playing the cello, you’re going to lose your skill.” His agency simply stopped rewarding their police dogs for finding cannabis, he said, and they learned to stop looking.

Either way, the fractured nature of legalization seems set to keep these dogs busy for now. Cannabis from legal states can fetch significantly higher prices in Illinois, incentivizing black market growers to send their stuff elsewhere. As reported by the LA Times, California produced 13.5 million pounds of pot in 2016 and only consumed 2.5 million itself.

Illinois may remove itself from the list of states with ludicrously high black market prices soon, however, thanks to pending cannabis legalization legislation. That’s certainly what voters want. Here’s to hoping that means retraining or retirement for Jayda, not “going to live on a farm.”

Enjoy the latest and greatest from Herb, enter your email below to get exciting cannabis updates delivered to your inbox.
June 28, 2018 — Last Updated
Written by Tobias Coughlin-Bogue