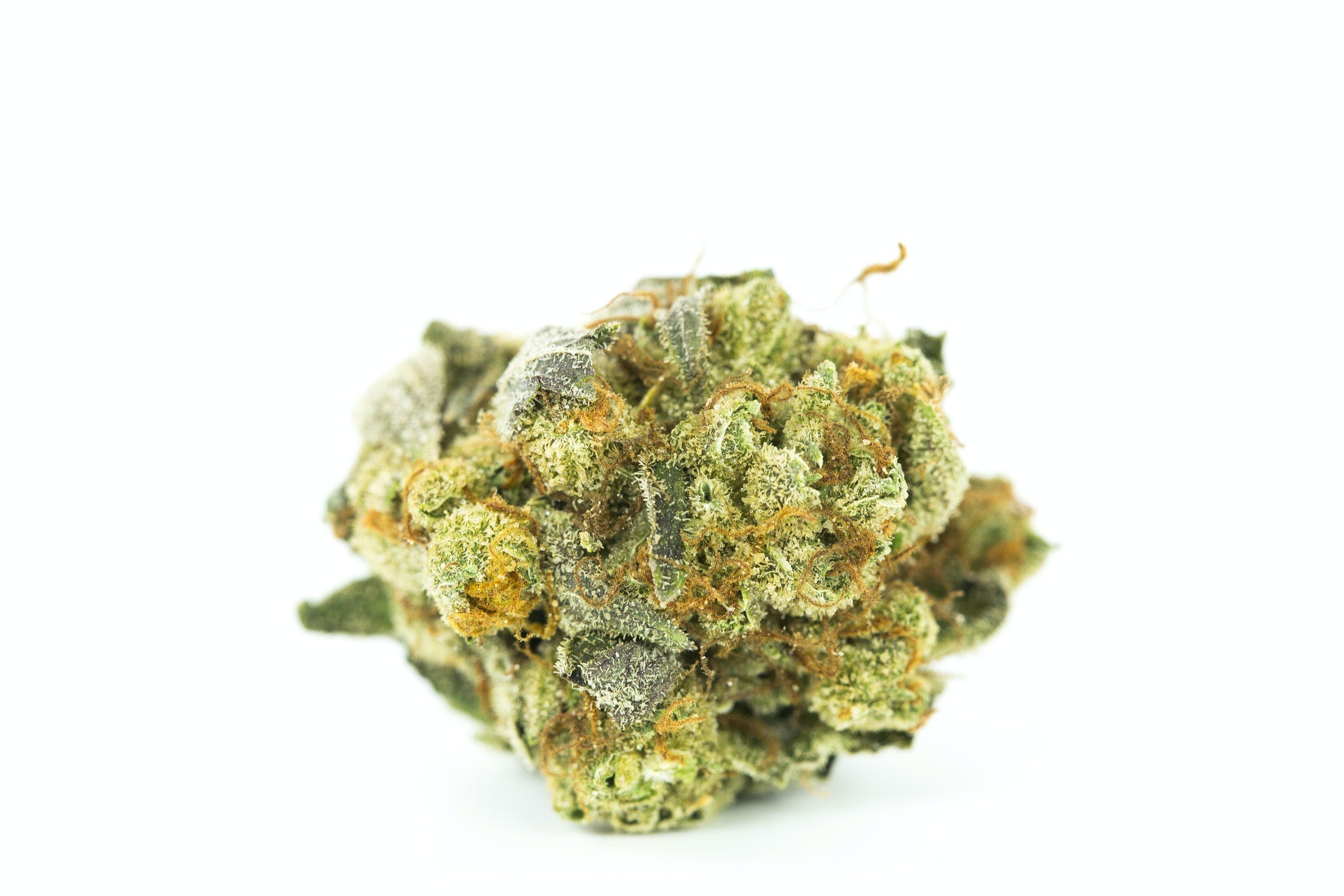 Like a smooth oldies playlist and the company of the one you love, Sundae Driver is a perfect pairing for that weekend cruise around town.

Let’s review Sundae Driver, one of the strains that give a well-rounded and effective high to users looking for a number of different benefits from their flower. These dense buds are high in THC and visually appealing due to the variety of colors that cover them.

This indica-dominant hybrid will catch the eye of any stoner that knows what to look for. With orange hairs protruding from the light green and purple nugs and a heavy sprinkling of trichomes that shimmer like a pair of newly shined shoes, it’s easy to see why Sundae Driver is the go-to strain for many of us.

When Two Weed Strains Love Each Other Very Much…

The lineage of Sundae Driver is enough to have cannabis connoisseurs doing their best impression of a dog getting ready to eat dinner. The offspring of Fruity Pebbles OG and Grape Pie, this fruity dessert of a strain might be just the treat you need.

Users love how visually appealing this strain is, with the frosty nugs that stand out against the crowd. Once you’ve inspected and handled this strain, your fingers will look like you just bitch-slapped Frosty the Snowman. These noticeable trichomes are paired with shades of purples, light to dark green, and orange to showcase the myriad of effects this strain produces.

Often testing at close to 21%, Sundae Driver delivers a strong euphoric blast of joy and excitement that is eventually mellowed to a calming state of mind that puts your body at ease. While these characteristics may differ among users, some of the most reported positive effects include:

The indica effects tend to take center stage with Sundae Driver, making it perfect for those who want to manage their pain while boosting their mood. That mix of sativa goes a long way to balance out your high. If you are a fan of dominantly indica strains, take a look at this list of some strong indica cuts that will have you locked and loaded.

These negative effects differ among users, of course, so you’ll want to try this strain out for yourself to see how it works out for you. There’s lots of strains out there that will produce anxiety if you smoke too much or aren’t used to that amount of intake, so don’t be too discouraged by these possibilities.

When you have the privilege of giving this strain a good whiff, you’ll notice the sweet, creamy aroma that gives off milkshake and other creamy dessert vibes. Hints of grape will creep in, having to fight for your nose’s attention among the other flavors. When the parents are Fruity Pebbles and Grape Pie, you know the descendent will be a blast of fruity, sweet flavor to the face.

The exquisite terpenes in this strain, which we will discuss in-depth later in the article, cause the fruity and sweet taste that delights users. Underneath this fruity cover are undertones of bitter chocolate that pair with the creamy flavor when smoking. Truly representing the hot fudge sundae of weed, there’s no question that you’ll want to indulge in this delightful strain.

Some patients mention the positive effects that this high THC strain has on their pain relief and overall mood. These effects have aided patients with conditions or diseases including stress, depression, PTSD, cancer, insomnia, and chronic pain.

While pain relief and relaxation are due to its heavy indica attributes, the balance of this strain is what makes it truly special and appealing to lots of people. Just right for an afternoon pick me up after work or school, Sundae Driver can be the mellow mood booster to your day.

Growing And Flowering Your Sundae

While typical Sundaes don’t require any prerequisite planting or planning, you’ll be glad you did the extra work to produce this creamy treat that smells as if you’ve just entered an old diner with hand-made ice cream ready to be consumed. Both parents of this strain have been known to grow tall, so you’ll want to prepare for these plants to reach at least six feet.

Sundae Driver has been known as one of the easier strains to grow thanks to its adaptability. Grown either indoors or outdoors, it typically takes up to two months to mature. When growing your Sundaes outdoors, the ideal flowering time lies in early to mid-October.

The two dominant terpenes in Sundae Driver are Beta-Caryophyllene, which has been studied for its medicinal benefits in fighting inflammation and cancer cells, and Limonene, the popular citrus terpene that is thought to relieve anxiety and stress. Some other terpenes that are present in smaller amounts include Myrcene, Linalool, Alpha Humulene, and Alpha Pinene.

Take a look at a couple of our options for getting your hands on this strain that is more balanced than a yogi on a tightrope.

You can get three Sundae Driver seeds for thirty bucks, which will produce the impressive buds we’ve been talking about. Norcal Farms offers a huge variety of strains, and all of their products are guaranteed to be the best quality genetics available on the market. Remember, this strain is considered an easier type to grow, so you can breathe a little easier if you’re worried about wasting the seeds. Don’t be afraid to unleash your inner Doctor Greenthumb.

Put a little dash into your beverage with this terpene distillate that packs all the varying effects of Sundae Driver’s terpene catalog. True Terpenes isn’t messing around when it comes to their profiles. Their product is natural, organic compliant, produced in accordance with State-by-State Regulatory Compliance, and created by 7 chemists. It’s best to keep the bottle in a cool, dark place and to mix with low heat.