How to talk to teens about cannabis, according to a weed industry expert

Forget the scare tactics of D.A.R.E. This is how to talk to teens about cannabis. 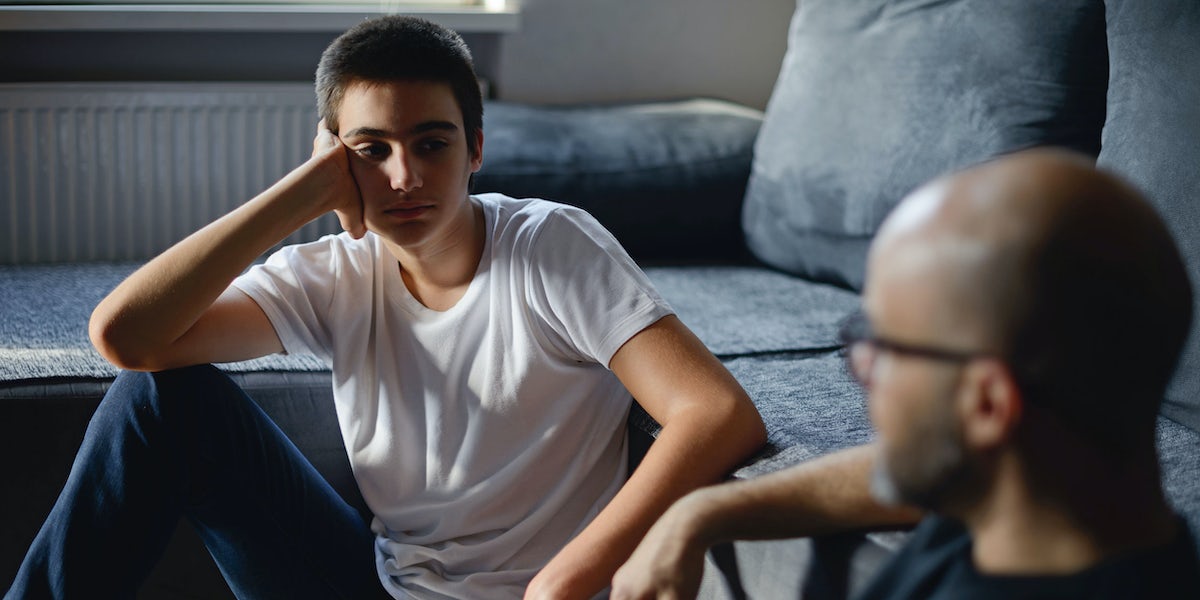 How to talk to teens about cannabis

Figuring out how to talk to teens about cannabis is hard. Especially with so much conflicting info out there. From different laws at the federal and state level to the conflicting research on the medical benefits, it’s a difficult time to help teens navigate decision making regarding weed.

We spoke with a parent of two teenage girls, ages 16 and 17, who’s been working in the cannabis industry for the past four years. Jen Price, Founder and Managing Director of the Potnt Agency, gave us some great insight on how to talk to teens about cannabis—in a realistic way.

With cannabis in the news on a weekly basis and nine states that have fully legalized the plant for adult use consumption, it’s good to figure out how to talk to teens about cannabis sooner rather than later. Price told Herb, she started talking to her daughters about cannabis when they were 12 and 13, even though they live in an East Coast state where cannabis is still illegal. When Price began to work in the industry, she wanted her daughters to understand why. This is when she began thinking about how to talk to teens about cannabis in a way that’s both responsible and honest.

“I actually even had my girls start interning with me that summer so they were probably 13 and 14,” says Price. “I would give them age-appropriate projects. I need you to scan the news every day, take 15 minutes, and anything that pops up that you think is interesting, send it to me…They came to understand cannabis as this miracle plant that could really help kids, and they are kids, so they related to that.”

Education is key, but misinformation is counterproductive

Figuring out how to talk to teens about cannabis openly is great, but don’t spread misinformation. Do your homework and learn about the plant, from its medicinal benefits and historic uses to its legality and possible side effects. Price explains what really worked for her family, was learning about the plant together.

“Learning together, I think that’s key,” says Price. “I feel like a lot of adults don’t understand cannabis and rather than taking the time to learn about it and be educated about it. They’re just slamming the book down and being like, ‘No that’s a bad thing. That’s a gateway drug.’”

While Price was learning about cannabis for work, she and her daughters explored a variety of topics together. This is a great way to navigate how to talk to teens about cannabis because then questions naturally come up.

Have a conversation about cannabis as medicine

In the past, cannabis was mostly looked at as a “soft” drug, possibly a “gateway drug.” This was always included in curriculums about how to talk to teens about cannabis. But the public’s view of cannabis is changing; we’re now looking at the plant more as medicine, an alternative treatment that helps people when everything else fails. This is a sentiment you can create in your home when deciding how to talk to teens about cannabis.

“We’ve always looked at [cannabis] as a medicine,” says Price. “And when they were younger I used to tell them, ‘Would you take Advil if you didn’t have a headache?’ And they’re like, ‘No, why would we do that?’ And I’m like, ‘Exactly! Would you use cannabis if you didn’t have an illness that requires that for your treatment?’ So I think from a very young age, they’ve always looked to it as medicine.”

She explains that now, her 16 and 17-year-old daughters don’t seem to have much interest in cannabis as something cool and fun to do with friends. As a medicine, sure. One of the girls even takes CBD oil gel capsules to help with symptoms of a rare disorder. But, cannabis recreationally? Not so much. They’ve even stopped hanging out with one friend who their mom suspects had started to experiment with weed and possibly other substances recreationally.

Explain the dangers of the black market

Even though Price has created an open dialogue in her home about cannabis and other substances, she realizes that “teenagers are teenagers.”

“There’s always going to be those kids who want to try stuff and push the boundaries,” says Price.

“I’ve explained to them, if you’re in a state where [cannabis is] legal, it’s gone through the regulations and the proper channels where it’s been tested before it reaches the dispensary, and then it’s been tested some more,” says Price. “…But if you’re getting it through the black market, you really don’t know what you’re getting. It’s just something I’m going to keep talking to them about forever because I feel so strongly.”

Be open and available

Keep an open dialogue, but also make sure your teens know that you’ll be there for them if they do decide to experiment with cannabis, alcohol, or other drugs. It’s one thing to “talk to talk,” but teens need to trust their parents will “walk the walk” when they need immediate help.

“My kids know that no matter what they’re never going to get in trouble by me,” says Price. “We talk about this all the time. If they were to call me and say, ‘Hey we just smoked pot and we’re feeling really weird, can you come get us?’ I would be there in a heartbeat. And we would have the conversation at the appropriate time like, ‘how did that make you feel?’ What’s going on here? Why did you feel like you needed to try that?’”

Encourage them to wait until they’re 21

Regardless of how cool and open you are with your kids about cannabis and alcohol, it’s still illegal in the U.S. for young adults under the age of 21 to use these substances. That has to be factored in when deciding how to talk to teens about cannabis. Aside from encouraging your kids to obey the law, explain to them why these substances could damage the developing brain. And if you don’t know, do the research together.

“I tell my kids that your brains are not fully developed until you’re 25. That’s just a scientific fact,” says Price. “You need to understand that in your youthful mind, you can make bad decisions and never be able to take them back.”

Like parents who promise to bring their kids out for a drink on their 21st birthday, you could encourage your teen to wait to experiment with cannabis until they’re 21 with a similar bargain. This might even add an element of fun to your strategy of how to talk to teens about cannabis. Like Price’s family that doesn’t live in a state with adult use cannabis access, she’s told her girls, if they do want to try it, she’d rather have them do it in a state where it’s legal and regulated.

“I tell them that I don’t want them to smoke cannabis or to consume edibles until they’re of legal age, which would be 21, but I understand that kids like to experiment and try stuff,” says Price. “I don’t want them to, but if they should decide that it’s something they want to do, I tell them they absolutely must promise me that it’s going to be in a state where it’s legal. That’s something we’ve talked about ad nauseum.”

Unfortunately, it’s not like you learn how to talk to teens about cannabis and then never have to have the conversation with them again. But, if it’s an on-going and healthy discussion, chances are, your teens will also develop a healthy relationship with the plant.

“The key takeaway is that drugs today are different and cannabis has been villainized for a very long time…” says Price. “But take the time as a parent to educate yourself alongside your child so that you’re working on this together. It could mean all the difference in the world.”

Cannabis For You, Near You
Join the Herb community and get exclusive offers, early access to products, and good vibes.
May 07, 2018 — Last Updated December 05, 2019
Written by Michelle Janikian