Now Reading:learn | What is Sativex? 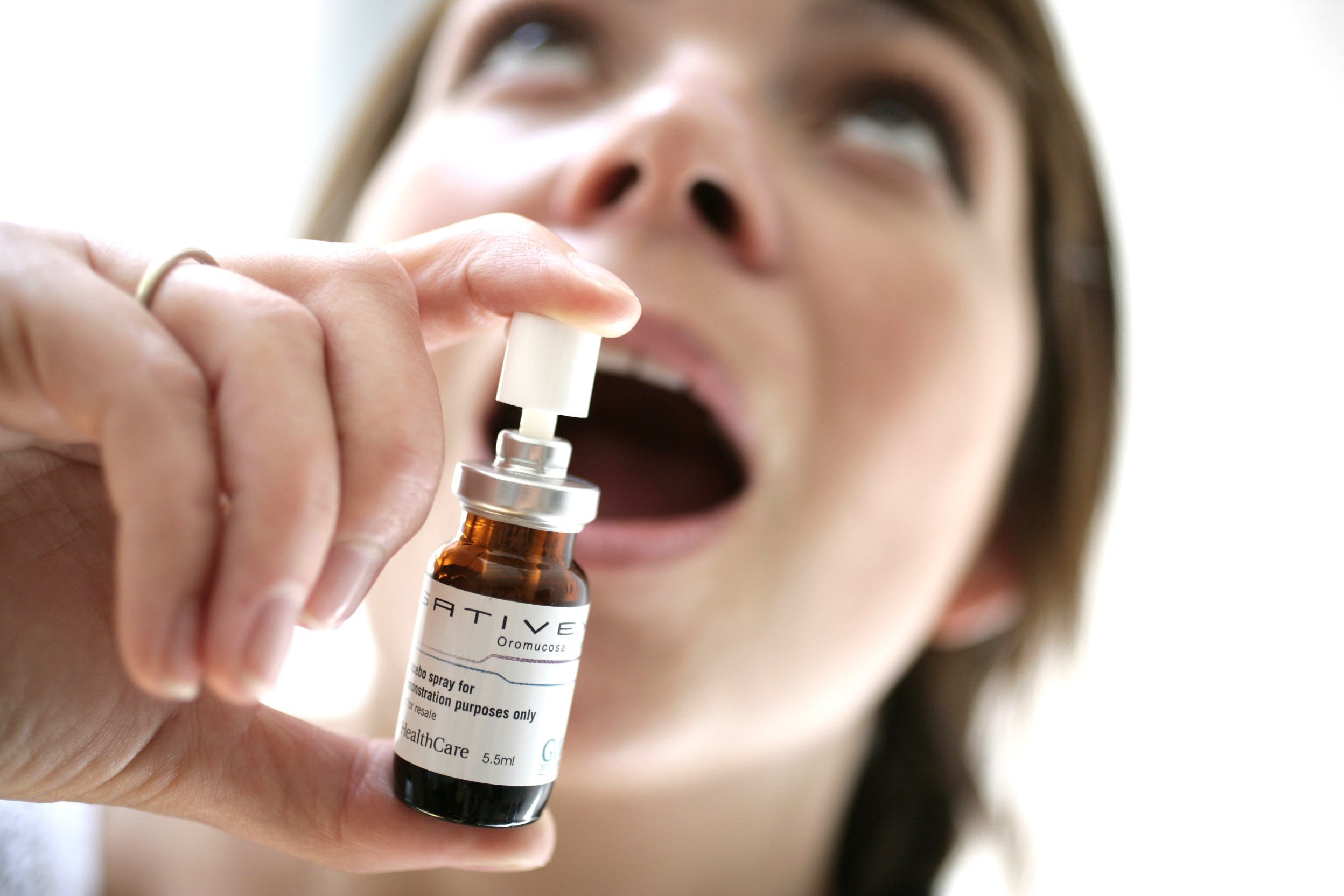 Sativex is a patented marijuana mouth spray developed for patients with multiple sclerosis to help treat and alleviate symptoms. The pharmaceutical drug is currently available in over 24 countries, and though it has yet to be approved in the US, it’s still a ground-breaking drug that’s gained approval in countries where marijuana is not legal.

For many patients with serious medical ailments, finding effective medications can be a challenge. Many standard treatments for severe conditions, such as multiple sclerosis, can be costly and come with severe side effects. Now, revolutionary drugs like Sativex®, a cannabis-derived pharmaceutical, are transforming medical cannabis into a standardized prescription drug. But, what exactly is Sativex® and how is it different from the plant? Here’s what you need to know.

Sativex® is a branded cannabis-based pharmaceutical developed by Britain’s GW Pharmaceuticals. The drug is intended for the treatment of spasticity caused by multiple sclerosis. The generic name for this drug is nabiximol. Sativex® is a mouth spray administration of nabiximols and it provides an even dose of unique chemical compounds in each spray. The active components of Sativex are cannabinoids, which are chemicals thought to be unique to the cannabis plant.

This medicine has improved the lives of those patients suffering from multiple sclerosis whose countries ban the use of cannabis as a medical treatment. Using this medicine they can find the healthiest way to smoke weed and a great substitutive of the cannabis juice recipes which sometimes give more dose than the needed.

How does Sativex® work?

Sativex® stands apart from other common cannabis-like medications. This oral spray is a real cannabis extract, not a synthetic. In fact, Sativex® actually contains tetrahydrocannabinol (THC), the primary psychoactive component in the cannabis plant. Sativex® is special because this drug contains a standardized 1:1 ratio of THC and another popular cannabinoid, cannabidiol (CBD).

Unlike THC, CBD herb does not produce a psychoactive high (so you won’t have to search on the internet the best detox for drug test). Instead, extracts from medical cannabis plants high in CBD are often used to treat children with severe conditions like pediatric epilepsy. Combining THC and CBD is thought to enhance the anti-spasmodic, pain-fighting, and neuroprotective effects of both compounds.

Sativex® also contains some specific minor cannabinoids and beneficial terpenes, which are aroma molecules found in plant resins, including the cannabis plant. These terpenes are thought to work synergistically with cannabinoids, amplifying the therapeutic potential of each compound.

As an oralmucosal spray, the active ingredients of Sativex® are absorbed under the tongue and in the soft tissue of the cheek, where cannabinoid receptors are present.

There are two synthetic, laboratory-made cannabinoid medications on the market, dronabinol and nabilone. Both of these drugs were designed to mimic THC, and they can be prescribed to patients with cancer and AIDS-related nausea, wasting, and appetite loss. Sativex® is in a class of its own, as the drug is a real, natural extract of the cannabis plant.

What does Sativex® treat?

Sativex® has undergone many clinical trials for a variety of medical conditions. It is currently approved for the treatment of spasticity related to multiple sclerosis, after demonstrating success in double-blind, randomized, placebo-controlled clinical trials in humans. However, those with rare muscular conditions like ganglia necrosis have also found success with this drug.

Patients in Canada are able to access Sativex® for the treatment of cancer pain. Though, clinical trials in the United States have failed to prove that Sativex® effectively alleviates pain from cancer or chemotherapy. Early trials of the drug in cancer patients were successful, yet the spray didn’t make the cut in later trials.

Although Sativex® can produce a slight psychoactive effect, there is no evidence that users have developed a tolerance for the drug over a one-year period.

GW Pharmaceuticals hopes that drugs similar to Sativex® will treat a number of other medical conditions, including epilepsy, cerebral palsy, schizophrenia, and cancer. Further clinical trials are sure to dominate the new world of cannabis-based pharmaceuticals in the upcoming years.

Is Sativex® the same as cannabis?

Sativex® is a formulated pharmaceutical drug that contains real cannabis-derived compounds. While some might argue that the drug is more or less a fancy and expensive cannabis tincture, this product has a few key differences.

For one, the compounds included in Sativex® have been specially formulated for success in multiple sclerosis. This product has also undergone rigorous clinical trials to ensure that it is safe and effective at easing related symptoms such as spasticity and pain.

As a standardized pharmaceutical drug, Sativex® also delivers a consistent and reliable dose. Every spray is measured and provides a specific ratio of cannabinoids.

In general, however, the cannabis plant likely contains far more chemical compounds than a formulated pharmaceutical like Sativex®. The herb can produce over 400 different phytochemicals, including over 113 different cannabinoids. Researchers are only just beginning to figure out what these cannabinoids are and how they interact with each other and with other chemicals in the body.

For this reason, many patients take the risk of consuming a full-extract medical cannabis oil made in small batches from real plants over a spendy pharmaceutical. There is a growing movement of patients who advocate that “whole plant medicine” is the new direction for medical cannabis products. Though, whether or not this is safe or helpful is up to individual preference and is subject to debate.

Generally speaking, here are the pros and cons of choosing nabiximols over cannabis:

Does Sativex® have side effects?

Sativex® is made from cannabis and therefore produces what some might consider an intoxication or a high. However, the 1:1 ratio of THC and CBD in the drug make it a very mild intoxication. Further, since the drug is manufactured in a controlled environment, the dosage is consistent. It is also reported that there are no known long-term negative effects on cognition.

In general, you can expect the following possible side effects from nabiximols:

In general, the side effects of Sativex are considered mild and the drug is considered well-tolerated.

How much does Sativex® cost?

Sativex® is not a cheap drug. Without government subsidies to help pay the cost, nabiximol spray is incredibly expensive. In New Zealand, in 2016, only 26 approved patients filled a prescription for Sativex because the high cost of the drug and the difficulty obtaining a prescription. The average prescription costs around $1,200 (NZD) per month,  $16,650 (USD) annually.

According to a professor at the London School of Medicine, Sativex® has “not been proven to be cost-effective” in the UK. However, if Sativex® is approved by the FDA in the US, the price would be considerably lower and governments would probably take on subsidies or require private insurance to cover costs.

Where is Sativex® legal?

Sativex is currently available in over 28 countries by prescription only. Unfortunately, none of these countries include the United States. Some of the countries which allow for prescription nabiximols include:

According to GW Pharmaceuticals, the company hopes to gain approval for Sativex for the treatment of MS-related spasticity in Middle Eastern and Latin American countries in the upcoming years. It is unclear when and if this drug will be approved in the United States, which has a strict ban against THC and cannabis products thanks to the herb’s Schedule 1 classification.

However, another GW Pharmaceuticals drug, Epidiolex, has shown dramatic success in various forms of epilepsy, including Dravet Syndrom and Lennox-Gastaut Syndrome. Epidiolex is a purified form of CBD and contains no THC whatsoever. Already, patients have received special approval to access this drug in the United States, where it has undergone successful phase 3 clinical trials.