Jimi Cummins is living the dream. He spends his life in a Westphalia van, traveling across the country and making epic pipes in wide-open spaces. 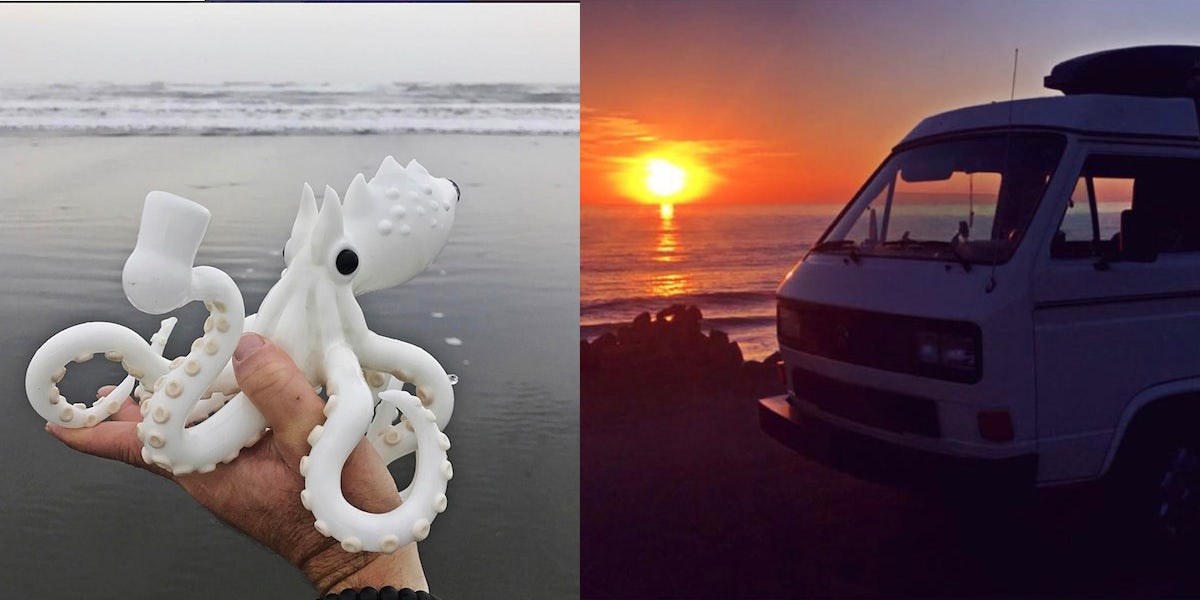 In just a few weeks, Jimi Cummins will make his longest journey yet: driving over 3,000 miles and across eight states—from Santa Cruz to West Palm Beach Florida—in his Westfalia van to hand-deliver one of his custom-made glass pipes. It’s just another day in the life of Cummins, a glass blower, and owner of Wicked Glass, who’s very lifestyle is an affront to the boundaries of societal expectations.

For nearly five years now, Cummins has lived this way. Traveling the country in an RV and Westfalia van, blowing glass and delivering it directly to his customer base—who might live anywhere from Tennessee to Idaho to Maine—while exploring the rugged landscapes that lie in-between. His autonomous lifestyle has captured the imagination of over 100,000 Instagram fans, many of them friends or customers he’s met in person while selling his glass at festivals or beach-towns across the United States.

It all started with a newspaper article featuring Jack Kerouac, and in the same day, an ad for an RV that was selling in Santa Cruz.

At the time Cummins saw the news article, he had what most would describe as a successful life.

“I had my little apartment overlooking the water. I had my little studio doing glass. I lived in this town where I had everything I wanted.” Cummins tells me. “[But] there was this weird feeling of just wanting to move. I couldn’t really explain it…Then when I saw the RV i was just like ‘you know what? Fuck it.’”

Cummins bought the RV on a snap-decision, outfitted it with solar panels, an inverter, batteries and everything he needed to run his glass blowing operation out of it. Then he took off.

The next two years of Cummins life became a series of 4-day stints in towns across the American South West, meeting people and trying on each new place like articles of clothing. Whenever a place began to look familiar, it was time to move on and explore somewhere else.

“I had felt like that’s true traveling: where you get the feel of a place by actually living there. And getting to know the people at the coffee shop, or whatever. Then it was really weird because once I got to that point—once I started to get to know people—it was time to bounce.” It’s not that Cummins is anti-social—quite the opposite. He acquired his Instagram following by talking to thousands of people across the country and sharing his artwork with them. Talking to Cummins on the phone, his laid-back, likable personality made it obvious why so many people gravitate towards him and his work. But in some ways, Cummins’ art depended on his ability to isolate himself from the influence of the world at large. “It’s more about getting away from everything so that I don’t have to do anything other than what just comes natural.” He tells me.

For this reason, Cummins also spent a lot of his time isolated in the desert, honing his craft. Particularly during the winter months.

How Cummins Felt about 24/7 Life in the Desert?

“I think pretty much I just wanted to feel like I was without any influence from anybody. And find out what I wanted to do, with no time limit” says Cummins.

These formative years, with days at a time spent working out of his RV in the middle of nowhere, helped Cummins discover himself as an artist.

“Glass at the time was just a means to basically put gas in my tank, so I could just move around…Travelling used to be my passion, and then slowly, as I was doing glass, that actually became not just more or less a hobby anymore. I actually found more interest in it. Then that kind of overrode just traveling.”

Still, traveling remains a cornerstone of Cummins’ lifestyle. And over the years, he’s honed this craft, too. He owns three gym memberships, so he can take a shower in just about any town he arrives in. He eventually swapped out his RV for a Westfalia in order to remain more discrete, specifically when searching for overnight street parking. And though it was never his intention, Cummins’ lifestyle perfectly emulates the burgeoning “Vanlife” movement that’s exploded on social media in the last few years, encouraging people to carve out a unique path for themselves, in pursuit of adventure and lifestyle autonomy.

But this lifestyle isn’t without challenges, and Cummins believes that the seemingly perfect lives of vanlife celebrities that play out over Instagram are too often embellished. “It’s like, my off time is only about 10% of the day.” Says Cummins. He also tells me that he’s had to deal with numerous car problems and breakdowns, and one time, his RV got broken into in the middle of the desert, leaving him with zero funds and plummeting spirits.

Another problem, according to Cummins, is that the secret to making vanlife financially viable is ever-elusive. “I don’t blame people for not wanting to try it because no one really talks about how they do it. And it feels like, how are you supposed to really express how people can do it if you can’t really show how you’re going to be able to do it, instead of just posting the end result.” He tells me. “I mean that’s just one picture, but how did you get there? How did you get gas money?”

Cummins believes it was his willingness to break social mores, and the desire to push the boundaries of societal expectations that led him to where he is today.

Living a life of autonomy doesn’t necessarily require a van, he says. “ I think its kind of more in your head. As far as that’s concerned I always say that you don’t necessarily have to go get in a van. I like to travel, but I still think people can still step out of their comfort zones and do neat things, and still live at their house.”

Right now, Cummins is working on a book that details his years of adventure, the road to self-discovery and features his artwork. The tentative release date will be 4/20/2018—both a wink to cannabis culture and the five year anniversary of the day he first set off on the road.

The name of his book is a play on words too—a nod to both his signature glass work, which resemble the legendary octopus-like sea-monster, the Kraken, and to the uncompromising lifestyle he’s designed for himself. Cummins is calling the book: “Kraken The Code.”

Get 20% off premium weed and discover the latest products, news, and deals in cannabis.
November 07, 2017 — Last Updated January 08, 2020
Written by Rob Hoffman