Now Reading:culture | It Turns Out Hollywood’s Latest Weed Comedy is Based on a True Story 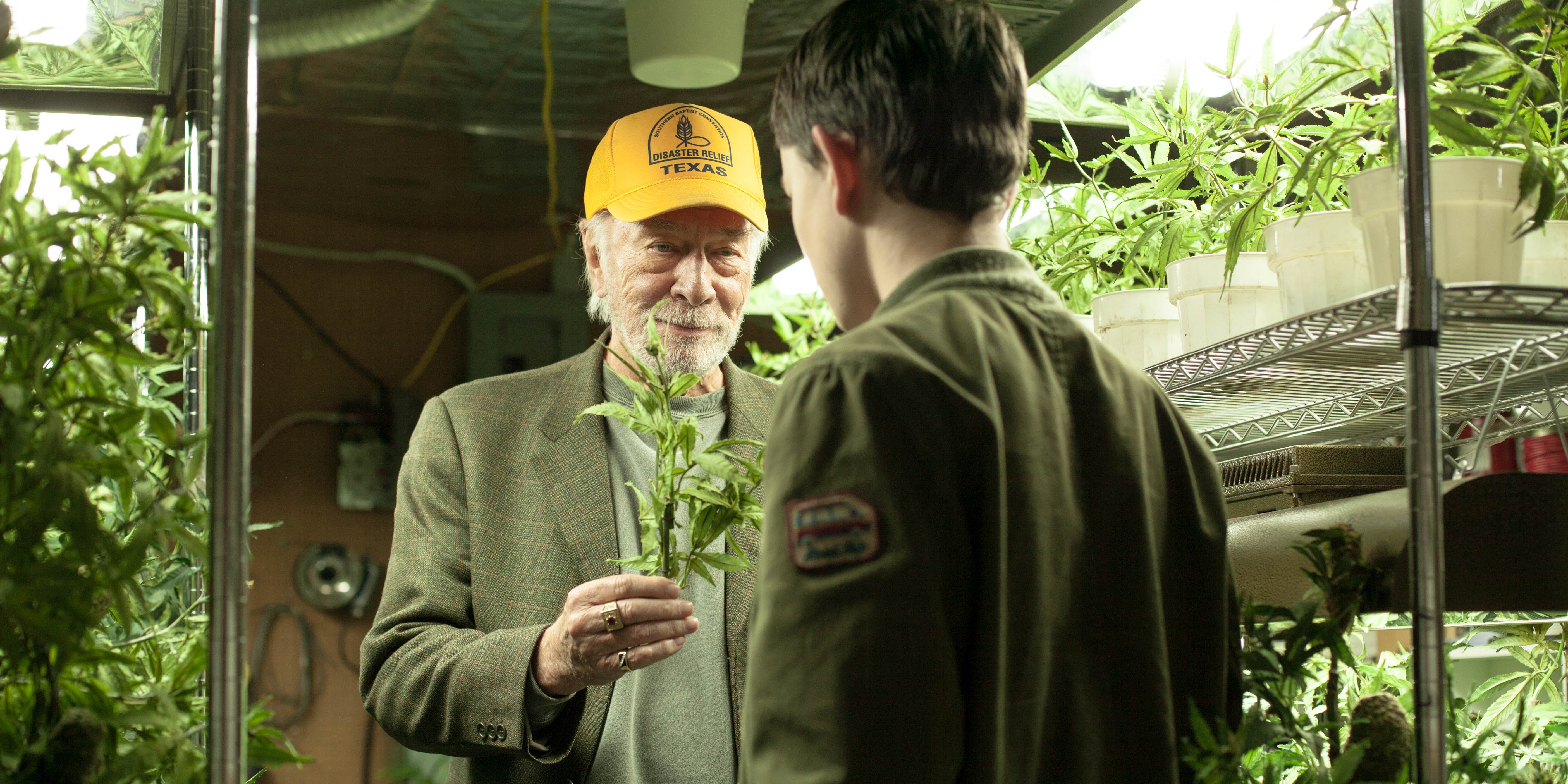 Stills from that Boundaries movie

The pot-dealing dad in “Boundaries” is based on Director Shana Feste’s father.

The plot of Boundaries, the latest film from Country Strong director Shana Feste, seems, at first blush, pretty improbable. The movie is based on the zany adventures that ensue when geriatric weed kingpin Jack, played by Christopher Plummer, hoodwinks his daughter Laura, played by Vera Farmiga, into driving him down the West Coast so he can secretly sell weed out of the back of his ancient Rolls Royce. Throw in the fact that Jack deputizes his oddball teenaged grandson Henry, played by Lewis MacDougall, and it all starts to feel a little rich.

But when you consider that director Feste’s father was actually a major pot kingpin, and her own teenage years were marked by the near-constant presence of pot, the film really starts to come into focus. While it’s still very much a movie, and thus a fictionalized version of events, it also has a lot of grounding in reality. It’s not what you would call semi-autobiographical, as Feste doesn’t make any claims that it syncs with real events and didn’t write Jack’s character to resemble her real dad, but it can’t really be appreciated without knowing that crucial bit of backstory.

To wit, on my first viewing, some of Laura’s grievances with Jack seemed hopelessly contrived, invented only to lend force to the “estranged father/daughter” road trip narrative. While she seems to constantly distrust his very presence, warning Henry, his grandson, not to get used to him, she never offers any specifics as to why. Given how affable Plummer manages to make Jack, it’s kind of hard to resent him as much as the movie wants you to in these moments. He seems like a genuinely good guy. But Feste’s real dad did real jail time for selling pot, which is exactly why her onscreen avatar is so preoccupied with Jack’s parental absenteeism.

And even though Feste isn’t basing this on any real-life road trip, knowing it’s based on her own family dynamic helps make the road trip format understandable. Packing people into a car and forcing them to work out their grievances is a tried and true movie trope, and it works a lot better once you know what those grievances really are.

Her family history also helps justify the role that pot plays, as it might otherwise feel thrown in just to make the movie weirder. In fact, Boundaries handles its cannabis content really well, playing with stoner stereotypes but never quite relying on them. Feste is clearly someone who has had a lot of contact with cannabis in her life, and it shows.

Herb caught up with her recently to ask what it was like growing up with a drug lord for a dad, where she stands on pot now, and whether or not Boundaries is a stoner film.

Herb: First off, I was curious about where ‘Boundaries’ stands in terms of legalization. It’s set in Seattle and California, seemingly pre-legalization. Is that right?

Shana Feste: Yeah, it was. You know, we made this movie a few years ago. So when the movie was ready for release, laws changed for the better. We had to actually add a line when Jack is about to bury [his stash] saying, It’s lost its fun, it’s about to be legal anyway.

Did that dampen the roguish aspect of the Jack character for you at all? Like, he’s not so dangerous?

I mean, look, this character is based off my father. And my father has been to prison for trafficking marijuana and has been a seller for a long time. He did it because he loves to smoke weed and has used it quite a bit throughout his life. Especially later in life when he was ill. But he loved the dangerous aspects of it. I think it really pissed him off that it wasn’t legal, because he always thought it should be legal. But he had a very good time selling it to as many people as possible.

I had no idea ‘Boundaries’ was based on your dad. Given that you’ve lived the experience that this movie is portraying, of being the daughter of somebody who is big in the black market, do you worry that this movie romanticizes that life a bit? Did you experience anything that wasn’t funny or fun about it when you were a kid?

Yeah, all the time. Most of this movie is actually true. My father was always the most popular guy in the room. My friends always romanticized it like, ‘Oh I wish my dad sold weed for a living, that’d be so cool!’ There was just weed everywhere growing up. Just plastic bags everywhere. But as much as that was romanticized by my friends, to actually have a father who did that—he was in and out of my life. He wasn’t there when I really felt like I needed him. He went to prison for trafficking marijuana, so I lost out on having a father for a few years. Also, I think my way of rebelling—not that this is a downside—was to be a straight-A student, to go to grad school, to be totally clean and sober. I’d come home from school and my father would be smoking weed with his friends in the back bedroom and would be like, ‘I think I see Shana coming! Open a window, hurry!’ Like I wouldn’t approve. Like I was going to break up the party or something!

So you definitely don’t have the same personal relationship to pot that your dad did. Do you use cannabis now?

I do! You can’t help but become your parents, I think. My husband and I, someone gave us a vape pen with the oil and we love it. We have three kids, so we use it at night to kind of calm down and get a good night’s rest. And my dad would love to know that. He passed away last June.

I’m sorry to hear it. One other thing I noticed was that Henry, the grandson character, doesn’t smoke pot at all. Was that a conscious choice?

No! I mean, he’s 13. He was 13 in real life, which I think is on the younger side to experiment with that. I think that would have probably been too far for Jack to have gone, to smoke with Henry.

Because Jack was supposed to still be likable?

Oh yeah. I mean, with my father, as much as it was always around, it’s not like he was smoking with me or doing anything like that. But also, we wanted to use real marijuana in all of the shots, to be authentic. Especially in the grow house. But because of Lewis’ age, because there was a minor on set, it was very illegal. It would have gotten us into a lot of trouble. So we had to have fake plants or whatever whenever Henry was in the scene. Of course, we tried to use real marijuana whenever possible, and some of the shots of weed in people’s houses were the real thing, but whenever Henry was around it always had to be oregano or whatever our production designer used to make the right concoction.

I had no idea about those legal restrictions for filming. I will say the grow house in ‘Boundaries’ still looked really accurate.

Good. We definitely did research. Y’know, it was surprising how many sponsors wouldn’t let us use their brand name once they found out it was about a man selling weed. We wanted to use Rolls Royce. Rolls Royce immediately, when they found out marijuana was in the car, said we had to take the emblem off the hood and put in our own. Even though everybody looks at it and knows its a Rolls Royce. But there were so many references that we couldn’t use because this was a movie about marijuana.

Bummer. What were the Buddhist monks buying weed about? I was reading that many of the teachings of Buddhism aren’t compatible with cannabis.

Oh, really? My father was a Buddhist. He was a Buddhist all his life and he smoked a lot of weed, so I don’t know. I mean, look, my father has dealt to a lot of different people, and what I was trying to get across was all the different types of people who actually use marijuana. So that it wasn’t just this stoner stereotype that we have in our head. We have someone who is using it medicinally in the film. There was a cancer patient who was I think stage 3 when we shot it. There was a rock band and there were the Buddhist monks and there was an older guy from the retirement home.

There were truckers and more conservative folk in the montage too, right?

Yeah, well one of them was my father!

My actual father, yeah. I put him in the movie. He’s the guy with the handlebar mustache, and he was wearing this reflective vest. I did it because when my father was on parole when I was a teenaged girl, he had to pick up trash at the beach. I saw him one time picking up trash at the beach when I was with my friends and I was so humiliated. [The vest] was like a callback to that time in my life. But yeah, my father buys weed from Christopher Plummer’s character. It was pretty fun to shoot that with him.

What did he think of the film? Did he know that you were making this as a document of your childhood?

Yeah, he knew I was making it. He didn’t get to see it, because he passed away, but he was so open. He was really proud of me and what I had done. My father didn’t graduate from high school. He had his first kid at 15. He’s very different from Christopher Plummer in real life. He’s covered with tattoos, drove a pickup truck. He lived in Texas most of his life. I said, ‘Papa I’m making a movie that’s kind of based on you, it’s a lot about our relationship.’ He wanted Willie Nelson to play him! That was his one big thing. But he also said, ‘Bean’—he called me Bean—’you can make me look like Jeffrey Dahmer, I don’t give a shit. Just make the movie you want to make.’ That was his weird stamp of approval.

Um, that’s so sweet, I don’t know what to say. Actually, I have one last question: Do you consider ‘Boundaries’ a weed movie, or just a movie with weed in it?

I wouldn’t put it in that genre, because what I tried to do with this film was really to normalize it. The use of cannabis. It was like furniture to me when I was growing up, and that’s kind of how it is [in the movie]. Just part of their lives.

Boundaries is out in theaters now.