Voters, beware: We interviewed the ‘Cannabis Candidate’ and he’s full of it

Benjamin Thomas Wolf has been getting nationwide attention since releasing a photo of himself smoking a joint in front of the American flag. 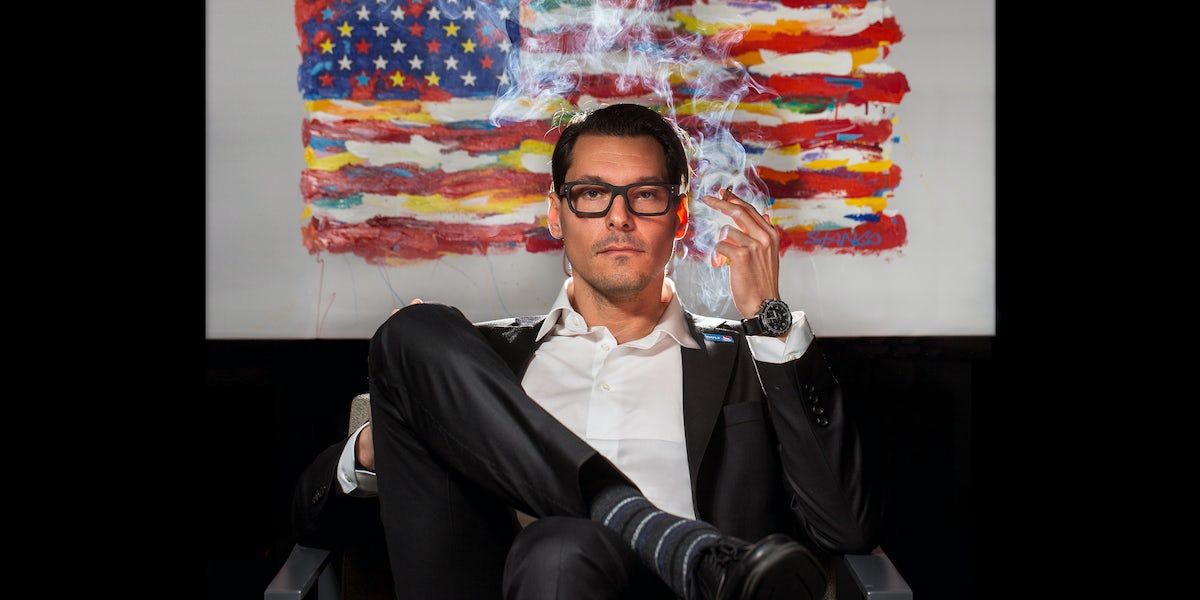 A picture of Benjamin Thomas Wolf, i.e. “the Cannabis Candidate” for the United States House of Representatives, went viral last week. The internet lit up after the 42-year-old Democrat running for Congress in Chicago’s 5th district released a photograph of himself smoking a joint in front of a painting of the American flag.

As a cannabis writer, I also got excited and tweeted at Wolf for an interview. I got that interview—but what I also received was completely unexpected: a Tweetstorm of people asking me to “do my research” on the cannabis candidate. That included a Twitter user called “Wolf Detective” who sent me multiple documents that “proved” Wolf lied about several crucial elements of his resume, and that he “doxxed” a former girlfriend and intern by publishing her home address online.

At first, I wasn’t sure what to do about these tweets and the related Reddit forum. But yesterday, Politico took this information public in an article that spoke with that “doxxed” ex, among others who were threatened by Wolf. Politico reported that Wolf physically assaulted the former girlfriend, Katarina Coates, six times as well as mentally abused her.

“He actually hit me, threw me to the ground, put his foot on my chest. He was really angry. He grabbed my face,” Coates told Politico. “I thought it was normal. I cannot explain the logic. It seemed like he cared about me when he did that. After that time he stood on my chest, he went and took me for chocolate cake. I kind of associated it with his caring…There were times I would ask him: ‘do you ever regret hitting me?’ He would say: ‘No, but I’m relieved when you put your head down so I don’t have to do it again.'”

Coates isn’t the only woman to come forward about the cannabis candidate. The Women’s March of Chicago had to ban Wolf from their Facebook page after other women complained.

But what’s more, the cannabis candidate seems to be exaggerating things on his resume, including his military “service.” Wolf has described himself as an “Iraq veteran” and tweeted at his Congressional opponent, Mike Quigley, on Veteran’s Day saying: “Wolf served multiple terms in Africa and Iraq. Wolf for Congress.”

Except, he didn’t, and vets know it. Veterans have taken to social media to respond to Wolf with the hashtag #stolenvalor for exaggerating his military service. What Wolf did do, according to reporting by CNN, was work as a US diplomat and special agent in Iraq and Africa. It’s still an important job, but different than serving in the military.

When Herb interviewed Wolf, we decided to stick to what we do best—weed. We tried to get details from the cannabis candidate about his pot policy, but there wasn’t much substance there either. To get the interview going, Herb asked Wolf how many grams of flower and concentrate he would allow people to carry if he was elected. He replied:

“How many grams would I allow? You know what? That’s a great question,” said Wolf. “I don’t know the specifics of it. I’m a low-level user, I don’t, you know, I buy it from a friend of mine or they bring it to the campaign office for us. I’ll have to learn more about that.”

For someone known as the “Cannabis Candidate,” he didn’t seem to know much about weed other than that he’s recently started smoking it. In reply to our question about how he would support minorities and those hit hardest by the War on Drugs, he said:

“You know I think it—gosh—a really big question. We do a lot of outreach with various communities here in Chicago, you know, it’s a big city, it’s a diverse city, culturally diverse, racially diverse. And I think everyone in this city and in this district clearly knows that we’re the pro-cannabis candidate. And they’ll know there’s always an open door to our office where we can help them with any projects, any start-ups, any businesses or banking needs that they would want. You know, our office will be front and center to assist them in any way we can.”

His vague answer was revealing considering that criminal justice reform is at the heart of conversations on cannabis legalization both statewide and on the national level. For someone who has made cannabis a central part of his platform, we expected a plan, like Oakland, California’s Equity Program, for example.

We also expected thoughts on the opioid crisis, which is now considered the largest drug epidemic in American history. Cannabis, has become a central part of this conversation too, as promising preliminary trials have shown that it can be used an adjunct treatment to wean people of opioids. Wolf’s proposal?

“I would like to see the Drug Enforcement Administration dismantled and have all of their personnel go and work for the Environmental Protection Agency,” he said.

These ideas are exciting: legalizing cannabis, dismantling the DEA—but does the cannabis candidate have realistic proposals as to how to accomplish these goals? Or are they just ploys to get young people’s attention?

Chicago’s 5th district, where Wolf is running, has an average age of 33, according to the Chicago Sun Times. His opponent, incumbent Mike Quigley, is an older centrist Democrat whose campaign has a lot more capital than Wolf’s, according to Ballotpedia.

A few months ago, Wolf called himself “Bernie minus 34 years” and he’s alluded to running for president on Twitter. But, Bernie Sanders was a politician for nearly 40 years who stood his ground on the issues in which he believes. The “cannabis candidate,” unfortunately, gives the impression that he’ll do anything to get elected and figure the rest out later. And cannabis is just a part of that.

The election for Chicago’s 5th district is on March 20. But you don’t have to vote for the Cannabis Candidate to support legal weed in Illinois. That’s because a measure will already be on the Cook County ballot asking voters if they support adult-use cannabis, thanks to lawmaker John Fritchey. While this won’t legalize weed yet in Illinois, it’s the first step for lawmakers to actually start the legalization process.

Enjoy the latest and greatest from Herb, enter your email below to get exciting cannabis updates delivered to your inbox.
March 10, 2018 — Last Updated
Written by Michelle Janikian