Now Reading:culture | Why America is to blame for Japan’s harsh cannabis laws 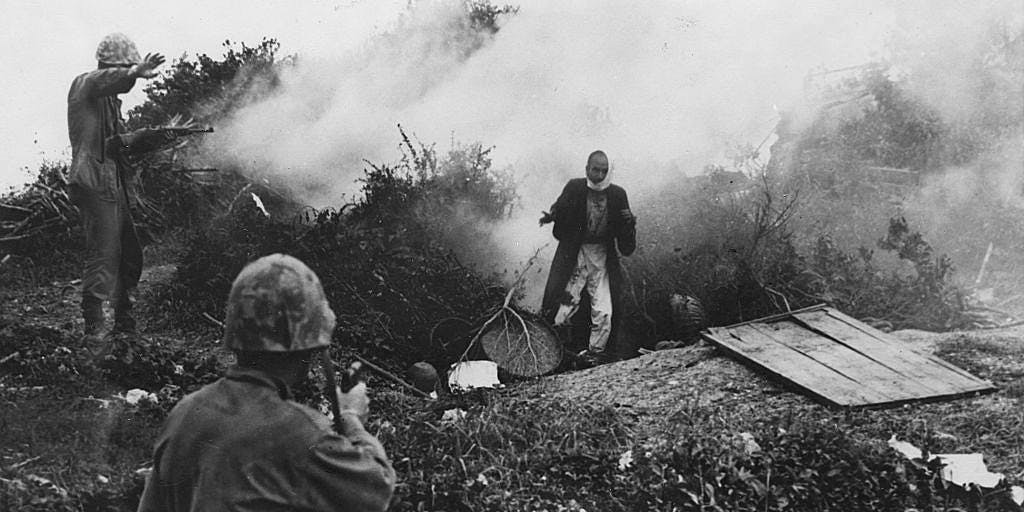 A Marine rifleman signals his companions to hold their fire as a Japanese soldier emerges from a cave in Okinawa, 1945. Persuaded by a smoke grenade, the occupants of the hideout surrendered to the Marines. USMC photo. (Photo by Interim Archives/Getty Images)

Why America is to blame for Japan’s harsh cannabis laws

In Japan, simply possessing cannabis can lead to a five-year prison sentence. For foreigners, it can mean deportation and a lifelong ban from the country.

Each summer in Japan, the remnants of a rich cannabis culture emerge from the ground at a rate that sends authorities into a blind panic to dispose of the evidence. In an effort to stamp out something which historically had never been considered taboo in Japanese society, police destroy millions of these plants annually only to discover their return the following year.

In Japan, simply possessing cannabis can lead to a five-year prison sentence while growing without a license can result in up to seven years. For foreigners, it can mean deportation and a lifelong ban from the country. Even beloved celebrities like Paul McCartney have learned the hard way after serving a nine-day jail sentence and banishment from reentry for more than a decade. But how did Japan get this way?

From cave paintings of cannabis leaves to seeds and fibers which date back millennia, Japan and marijuana were clearly once inseparable.
Takayasu Junichi opened a cannabis museum, the only one of its kind in the country, in 2001 in order to reconnect the people of Japan with their hidden history. It’s located in a historic hemp district just outside of Tokyo. Takayasu is joined by other historians like the team of researchers at taima.org, one of the most comprehensive English language historical archives on the topic.

Today, there are few experts on Japan’s cannabis history. There’s no doubt among them that cannabis was once a vital industry in the country. Some hypothesize this is because alcohol was not readily accessible to the working class.

It should come as no surprise that the idea to outlaw cannabis didn’t come from the Japanese, but from their American occupiers in the wake of the Second World War. After defeating the Japanese in 1945, America spent the next seven years doing something totally unprecedented. It stuck around to rebuild the country it had just been at war with. The United States instituted a total transformation of Japanese culture (which was exactly the stated goal). They wrote a new constitution for Japan and reorganized its society to look more like America.

Some of the changes can still be considered progress. For one, women were given the right to do basic things like own property and divorce their husbands. But some of the imported American ideals were not, well, ideal. Namely, the 1948 Cannabis Control Act, which was responsible for banning weed nationwide.

The cannabis community has guessed reasons for the ban for years and among the most popular is the well-known Hemp Conspiracy, put forth by cannabis legend Jack Herer in his book The Emperor Wears No Clothes. The story goes that newspaper mogul William Randolph Hurst and the Dupont Chemical Company campaigned to outlaw cannabis in the U.S. in 1937 because it posed a threat to the paper and nylon industries.

When American officials had the chance to do the same in Japan, they jumped at the opportunity. However, that theory has since been debunked by many historians and a rather thorough investigation from Alternet provides a good summary of why.

The more likely reason America outlawed cannabis in Japan is given by the museum curator himself
“In the same way the U.S. authorities discouraged martial arts such as kendo and judo,” Takayasu told the Asia-Pacific Journal, “the 1948 Cannabis Control Act was a way to undermine militarism in Japan. The wartime cannabis industry had been so dominated by the military that the new law was designed to strip away its power.”

Cannabis was just another casualty of shoddy policy based on little evidence and—in this case—America’s desire to ensure that Japan never became a military power again. In fact, the whole restructuring of the country was given over to General Douglas MacArthur, who ensured that the new constitution prevented Japan from ever taking part in another war. Given the importance that hemp played in making everything from rope to parachutes, a ban based on military restrictions made sense.

In the time after the ban, Japan went from having more than 25,000 hemp farms to just 60 licensed producers today. Those licenses were the product of a history very few Japanese know; one in which the people fought to prevent outright restrictions on a culturally and economically crucial crop.

When America finally left Japan in 1952, opposition to the new law persisted until the 1960s. That’s when the harsh stance on cannabis was solidified. As more anti-Vietnam War students began to mimic the American culture that had been forced on their parents, cannabis became the enemy again.

The highly conservative Liberal Democratic Party (LDP) ramped up their policies just as their American allies were about to launch a war on drugs. More importantly, as the New York Times discovered in 1994, it was the help of the CIA that made sure the LDP won every election from 1955 to 1993. Naturally, policies favorable to America followed.

The result has been a deep-seated fear of a harmless plant that continues to this day in Japan and goes as far as to ban research that might shed light on why the Japanese once revered this ancient herb.