Now Reading:culture | Mariah Carey And Her Crew Tried Edibles In Amsterdam (And Got Pretty High) 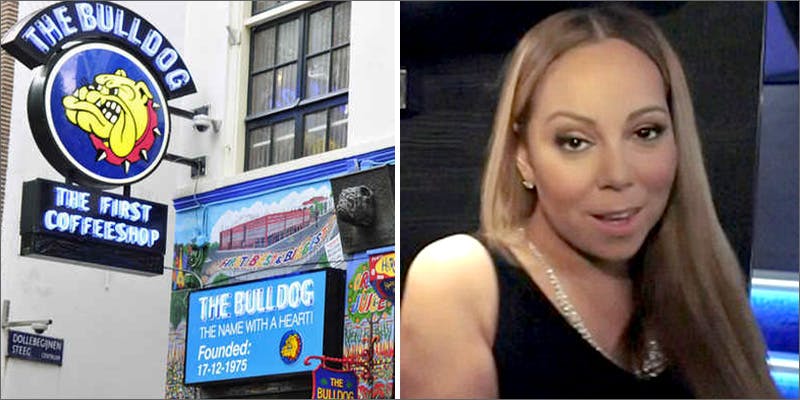 What’s the best part of Amsterdam? The legal weed, of course, which is what Mariah and her crew had their eyes on while visiting the Bulldog coffee shop.

What’s the best part of Amsterdam? The legal weed, of course. During Sunday’s episode of Mariah’s World, Mariah Carey and her crew traveled to Amsterdam for just that. And when the gang stopped by the Bulldog coffee shop, they dipped into some pretty tasty edibles. Although the singer tried to keep her treat under wraps, its name Candy Kush says it all.

Mariah and her crew indulge at an Amsterdam café

Typically, everyone is used to seeing stars like Miley Cyrus and Snoop Dogg indulging on some ganja. But this time, all of the attention is on Mariah Carey, who traveled to Amsterdam for a special treat.

During Sunday’s episode of Mariah’s World, she and her crew paid a visit to a cafe in the city. If you know Amsterdam, then you know what their cafes are famous for weed.

When Mariah and the gang arrived, they decided to order some special cannabis treats at the Bulldog.

Despite the herb being legal in Amsterdam, Mariah still tried to keep her activities under wraps. Rather than ordering the beet salad, which she was pretending to purchase, she instead ordered a cake called Candy Kush.

Of course, with a name like Candy Kush, it’s obvious that it was no traditional cake she was having. In fact, it also wasn’t Mariah’s first trip to this particular coffee shop.

According to the singer, Amsterdam has really fun places, especially the Bulldog. Although she was a bit hesitant on trying the space cake, she couldn’t help but indulge, and she wasn’t disappointed,

I’m so hungry, that’s the problem. It tastes good.

Then, during an on-screen confessional, the star claims she does what she wants, in a joking fashion,

Just like, whatever, I’ll do whatever I want. Edit that out.

Edibles 101: Give them time to kick in

Mariah wasn’t the only one that decided to be weed-friendly that day. Her crew also got high… maybe a little too high.

While celebrating with Tanaka, the team holds up a bag of weed and smiles, saying that it is legal where they are. Being that it’s legal, backup dancer Shaun also decided to have a treat.

However, according to Shaun, he has never been high before. Therefore, in true rookie fashion, Shaun began saying he felt no effects from his treat.

Edibles, in particular, can take anywhere from 30 minutes to two hours to kick in. But it seems as though Shaun didn’t catch that memo.

Before you know it, Shaun is high as gas, and everyone knew it, including Mariah,

Everyone else can see that you are f***ed up!

You instantly know the cake is kicking in when Shaun starts saying that he can smell the cold. What does the cold smell like exactly? You’ll have to ask Shaun to find out.