CBD for Seniors: How I Helped My Grandma Treat Her Pain

CBD for seniors holds a lot of promise, but many elderly just don’t know about it. 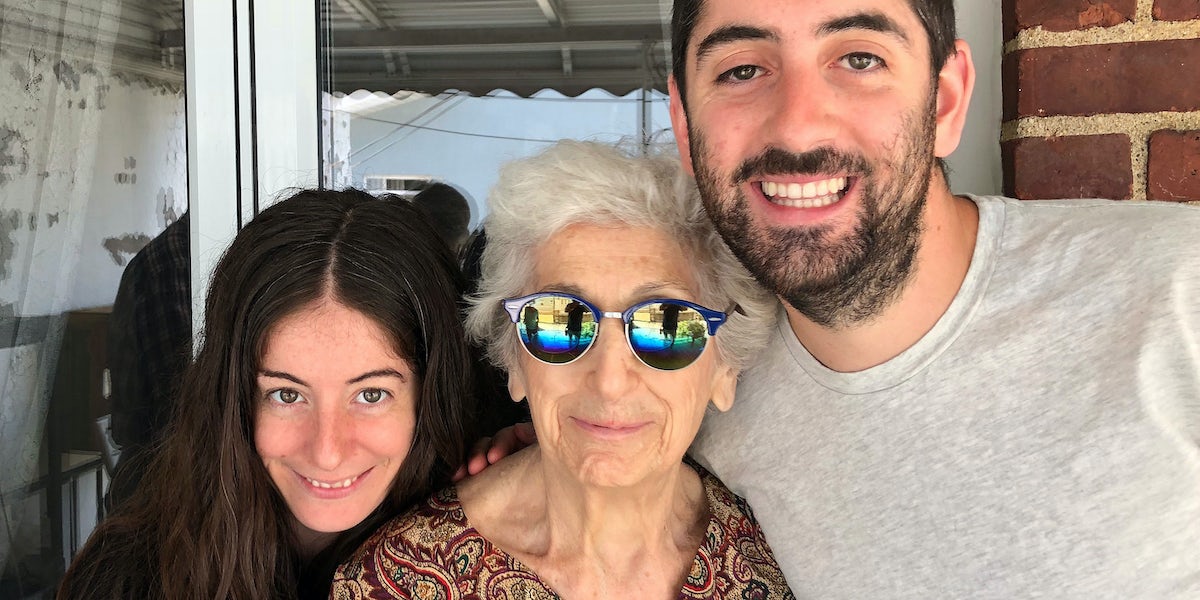 “How are you sleeping lately?” I ask my 86-year-old Medzmama, Armenian for grandmother, on a weeknight in July. We’re playing Uno in her kitchen, but I’m not focused on winning the game. Instead, I ask her to teach me the numbers and colors in Armenian, anything to keep her mind busy.

“Not very well,” she tells me. She gets up multiple times a night to pee, but often can’t get back to sleep and ends up watching made-for-TV movies on the Hallmark channel for hours. “I have something that might help,” I tell her and run downstairs to grab a bottle of CBD oil.

“This is vitamin CBD,” I tell her, taking the bottle out of the box and removing the cap to show her the measured dropper. “It can help you stay asleep.”

Medzmama puts on her bifocals and examines the bottle, lifting her eyebrows as she reads.

I tell her yes, exactly. It’s plant-based and you can buy it at a vitamin shop, just like valerian, and you take it before bed.

She takes the bottle and thanks me, her “pari ahchick,” or “good girl” in English, a term of endearment she’s used for me since I was a baby.

I feel immediate relief that she accepted the bottle so easily. Later, I’ll explain to her all the benefits of CBD for seniors: how it could help with her pain, appetite, mood, and possibly even memory as well. But Medzmama’s English was never very strong and now, at 86, nights aren’t her best time. So for now, I just drop 1 mL of CBD oil in a glass of water for each of us. And we play a few more rounds of Uno while sipping our CBD water before heading to bed.

According to a survey conducted by the Society for the Study of Addiction, seniors are the fastest growing demographic of cannabis consumers. Between the years of 2006 and 2013, there was a 250 percent increase in cannabis use for those ages 65 and up.

It’s a trend Renee Lee, President of the Rossmoor Medical Marijuana Club (RMMC), the largest cannabis education club for seniors in the country, has noticed. She says folks in her community mostly use cannabis for pain, sleep, and cancer. More recently, things like appetite, depression, and anxiety have become popular applications too, all common problems among the elderly.

Last winter, Medzmama almost completely lost her appetite due to joint pain and likely seasonal depression, not helped by her living alone. She lost tens of pounds and I spent the whole winter living 3,000 miles away worrying and calling to check up, but feeling ultimately useless.

Medzmama could take an anti-depressant, but she’s unwilling to. During the last few years of my grandfather’s life, she saw how medications’ side effects can make the elderly worse off than the ailments that they take them for, and she wants no part in that. CBD, I thought, might be the perfect alternative.

Benefits of CBD Oil for Seniors

A large-scale study published in March of this year found that 35.1 percent of elderly patients decreased the amount of prescription drugs they were taking when they began using cannabis, including strains high in CBD and THC. It also found that 93.7 percent of participants had an improvement in their pain level. Cannabis helped the majority of them eat, sleep, and go to the bathroom regularly while also reducing their overall pain considerably after six months of treatment.

Cannabis vs Opiates for Pain

Perhaps the most significant finding was that 18.1 percent of participants stopped using or reduced their dose of opioid painkillers. Sid Taubenfeld, CEO of Tikun Olam Pharmaceuticals, which oversaw the study, points out that this is significant because of how opioids worsen the quality of life for seniors, causing constipation, dizziness, and messing with peoples’ sleep cycles.

Medzmama is prescribed Tramadol for pain, an opioid prescription painkiller that’s considered less addictive than Oxycodone, which she takes as needed, but she thinks it may be giving her pink spots on her skin. I think it may be causing her constipation too, for which she drinks stool softener twice a day. She prefers, like many, to ingest natural medicines, multivitamins, fish oil and now, CBD.

Is CBD Safe for Seniors?

One of the main concerns seniors have, according to Lee, of CBD is a fear of “getting high.” Many don’t realize that CBD, especially an oil without any THC, isn’t intoxicating. (All the experts Herb spoke to for this story, however, stressed that small amounts of THC are best for alleviating pain.)

Another fear seniors and their caretakers have is dizziness, which can increase the chance of falling. It’s a concern my family expressed to me upon hearing I had given Medzmama a bottle of “weed” oil; our matriarch fell recently in the middle of the night and my uncle had to break into her house at two in the morning to help her back into bed.

But even in Tikun Olam’s study, only 9.7 percent of seniors experienced dizziness. The other main adverse effect was dry mouth, which affected 7.1 percent of patients. But it’s important to note, many of these participants were smoking cannabis flower, some strains high in THC, so these adverse effects could be reduced or avoided by consuming oils or capsules, especially those high in CBD.

Despite all of this, one significant barrier to seniors accessing cannabis products remains: many don’t know about it. This was certainly the case for Medzmama, who would have never heard of CBD or thought to try a cannabis-based medicine if her tsakugas didn’t work in the legal cannabis industry.

That’s why Lee founded the Rossmoor Medical Marijuana Club (RMMC), one of the largest clubs for seniors to educate themselves on medical pot. Totally free of charge, the RMMC meets on the second Tuesday of every month, usually drawing crowds of nearly 200 people. Situated in one of the largest active senior living communities in California with nearly 10,000 residents, RMMC is Rossmoor’s second largest club and boosts the highest turnout, proving seniors are curious for more info.

Further south in the Golden State in Laguna Woods, Orange County, an area with a median age of 75, an Israeli health care and research company Niamedic—which has had a lot of success providing cannabis to seniors in Israel—will soon open its first clinic in America.

For the same cost as a typical private doctor’s office visit, elderly patients will get a full medical assessment in order to be provided with a “comprehensive cannabis treatment plan.” Treatment plans will consist of recommended strains, products and dosing for particular ailments, and will include weekly follow-up calls for a month to make sure the medical cannabis is working without adverse effects.

“We want to show that there’s a better way to get older,” Alon Blatt, Niamedic’s Business Development Director tells Herb. With the help of cannabis, Blatt says, Niamedic has helped seniors in Israel treat many different ailments at once without many side effects—and improve their quality of life by doing so.

Perhaps most miraculously, CBD not only treats the symptoms of getting older but is also showing promise in helping protect the brain from degenerative diseases like Alzheimer’s too. This is something that’s been on my mind a lot lately while spending time with Medzmama this summer; her memory isn’t what it used to be. She can still be sharp and funny, but more and more I see her struggle to remember little things, like what day of the week it is or how to cook her classic Armenian meals.

One evening this summer after spending almost a month at her house, I ran upstairs to fetch a roll of paper towels, a process that can take her 10, 15 minutes. When I reached the top of the stairs, I heard a noise in the bathroom and saw the sink had been running for hours. I switched it off, but tears rushed to my eyes. I know it’s a little thing to forget, but I’m leaving in a few days for another six months and I don’t know how many things she’ll forget until then.

Although cannabis and CBD for seniors hold a lot of promise, what elderly folks like Medzmama really need is a cannabis clinic, like Niamedic. She needs a medical professional to help her do the trial and error and figure out what works, by checking in regularly and keeping track of her vitals. But she lives alone in Queens, New York, and there’s nothing like it nearby. So for now, I’ll keep calling her to check in, hear the old neighborhood gossip, and remind her to take her CBD.

Enjoy the latest and greatest from Herb, enter your email below to get exciting cannabis updates delivered to your inbox.
August 30, 2018 — Last Updated
Written by Michelle Janikian