Now Reading:health | What Happened to Two Sisters With Epilepsy When Only One Had Cannabis 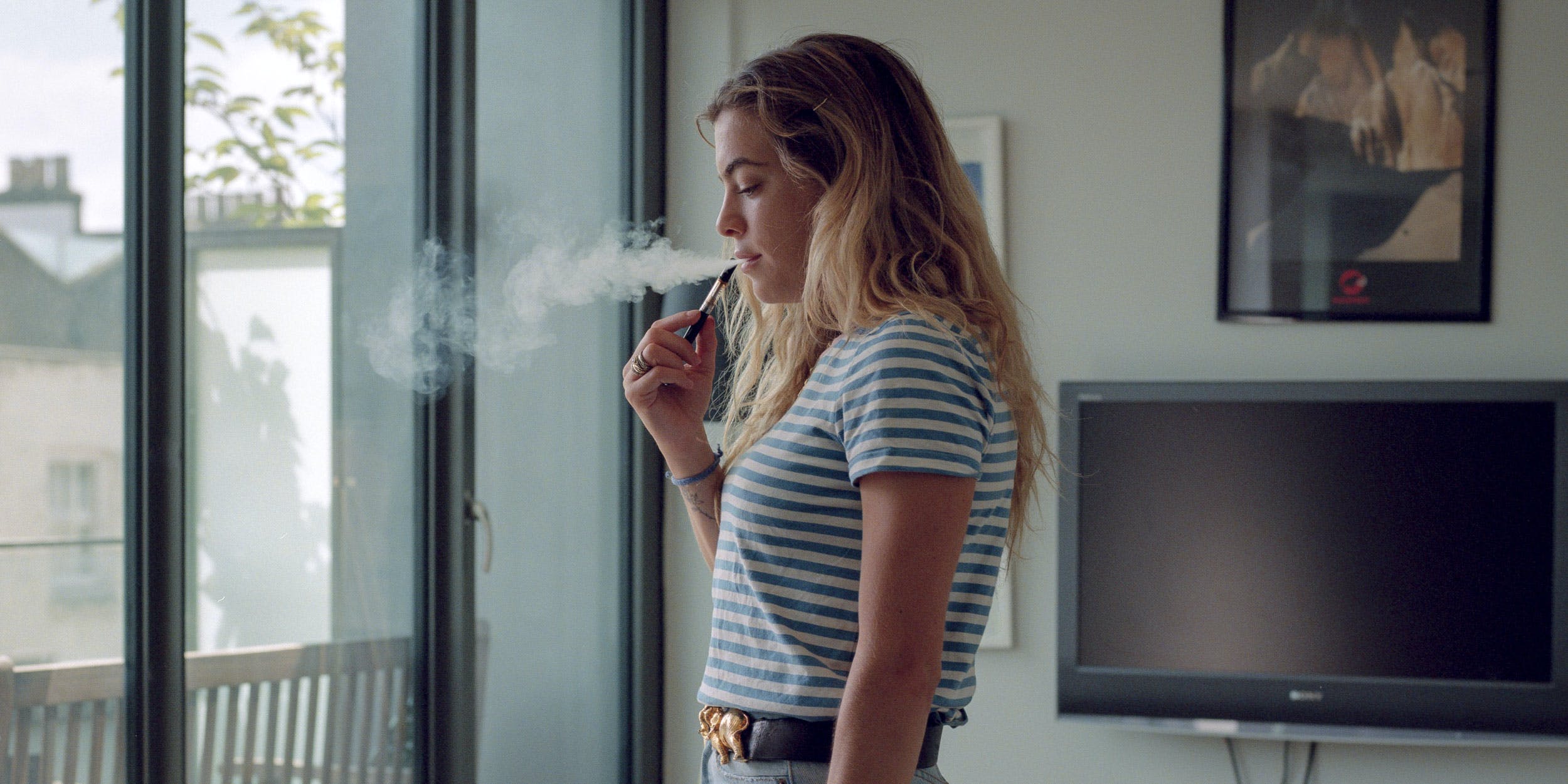 Chelsea Leyland was able to move to New York and get a prescription for medical marijuana. Meanwhile, her sister remains in full-time care in the UK.

Brooklyn-based DJ Chelsea Leyland is prominent in New York’s art and fashion communities, trots the globe playing international music festivals, and graces the pages of magazines like Vogue and Nylon. Both stunning and articulate with a strong-willed commitment to living life on her own terms, Leyland is a far cry from what you might expect of someone with an incurable illness. The stylish creative-turned-influencer also happens to be an epileptic and, on account of that, a rising cannabis activist. But she’s careful, as she says, not to let her condition define her.

Living in New York by way of London, Leyland has access to medical marijuana, vaping high-CBD oil to treat her epilepsy. In the fewer than two years since she began using cannabis, she hasn’t experienced any seizures. “There was this overwhelming feeling of groundedness and wholeness like this is what must it feel like not having epilepsy,” Leyland, now 30, says of her initial experience with cannabis.

Epilepsy had always been a large part of Leyland’s life, even before she was diagnosed. Her older sister, who suffers from a more severe form of epilepsy, had been having seizures since she was a baby. As time went on, her sister’s seizures got progressively worse, causing brain damage on top of an already mild case of autism. Despite being five years younger than her sister, Leyland stepped into a caring role, with ER visits and hospital rooms as a frequent backdrop to the girls’ childhoods.

Leyland’s own epilepsy began to reveal itself when she was in her early teens. She recalls sitting in the back of her mother’s car when light flickered across her eyes. It felt strange enough for Leyland to be suspicious, although neither she nor her parents nor even her doctors believed at the outset it could be epilepsy.

But it progressed, causing a teenage Leyland to experience jerks that would force her to drop her morning tea or whatever else she was holding. “It became this ordeal in the morning, I was dropping and smashing things the whole time,” she recalls.

Doctors thought it was connected to sleep deprivation, anxiety, or even psychosomatic sympathy with her sister, but Leyland kept linking that morning jerk in her fingers to a discrepancy in her brain. Finally, a neurologist diagnosed her with JME, or juvenile myoclonic epilepsy, also aptly nicknamed “flying saucer epilepsy.”

As if being a teen isn’t hard enough, the odd though bearable morning jerks graduated into grand mal seizures—causing humiliating falls to the floor as she convulsed, her eyes rolling to the back of her head. She remembers once, at 17, waking up from a seizure she had while showering, her body bashing against the bathtub until her father, having heard the racket, broke down the locked bathroom door to save her.

“Every seizure you have affects your brain, affects your memory, takes so much out of your body, as well as your confidence to live like a normal person,” Leyland says. “You’re living in fear of having another one.”

Leyland spent more than a decade on a drug called Keppra to cope with her epilepsy, something she kept secret as she moved through life—attending school in New York and blossoming into an international DJ. Something she calls “the craziest career possible” for an epileptic who’s sensitive to late nights and strobe lights.

“All the moments of being young for me came with this coating of danger because fun meant I was putting myself at risk of having a seizure,” Leyland says. “But I was adamant that I wouldn’t let my condition define me and I would lead a normal life.”

Only years into her career did Leyland come out about her epilepsy: She was in Barcelona, jet-lagged after a red-eye, and feeling quite uncomfortable during a magazine interview. “I was absolutely exhausted and in the danger zone state where I could have a seizure,” she recalls. Leyland paused the interview to say she wasn’t feeling well and when the journalist asked if it was a headache, she admitted to having epilepsy. “It was a huge release,” says Leyland. She’d exposed her grand secret and suddenly felt empowered.

“That was the moment where everything began for me,” says Leyland. “A huge part of me felt like I didn’t belong in the world I was working in. I often felt that I didn’t fit into the fashion industry.”

She began using her influence to do collaborations with charity. She produced and DJed a yoga event for the Epilepsy Society in collaboration with fashion retailer Farfetch. The event brought together 100 people to practice yoga and raise awareness for epilepsy. She also teamed up with fashion line Marc Cross, which designed two handbags with a portion of the sales going to the Epilepsy Society. She became an it-girl-turned-activist and life became richer.

Around the same time, she’d heard of a little girl named Charlotte, for whom CBD oil alleviated hundreds of seizures a day. Still, Leyland was skeptical of cannabis miracle stories. Not until a British activist offered her a few drops of CBD oil before a wedding did she realize just how miraculous marijuana is for epileptics.

That night, she stayed up past sunrise and, though she was sleep deprived, felt fine. She thought the feel-good normalcy she’d experienced might be due to the cannabis. Soon after, she tried it a second time, even forgetting to take her regular medication. Aghast once she remembered—it’s not the type of thing she’d ever need to set a reminder for, her body’s discomfort would be enough—she finally credited the CBD drops.

It took only a few months for Leyland to wean herself off Keppra and, along with it, she said goodbye to the irritability and insomnia it induced. The medication, she says, made her depressed and even suicidal at times, but in England there was no alternative. In New York, all she had to do was sign up for the state’s medical marijuana program.

Epilepsy tends to be one of the first conditions to qualify for medical marijuana when states legalize. There’s still a limited understanding of how cannabis quells seizures, but the stories of its efficacy are abundant, dating back to Ancient China. “It’s clear that there’s enough evidence out there that if you’re not doing well on traditional epilepsy medication, then you should definitely explore the CBD solution,” says Sid Taubenfeld, CEO of Tikun Olam Pharmaceuticals.

But Leyland’s sister, who’s too ill even to leave the United Kingdom, is deprived of such an opportunity. Though the UK is said to be the world’s largest exporter of cannabis, thanks to GW Pharmaceuticals’ Sativex, the majority of that prescription pot leaves the country. And in the UK, CBD cannot be sold as medicine. This recently got national attention when the first patient in the country to legally access cannabis oil, a 12-year-old boy with epilepsy who needs it for his seizures, had his prescription revoked by the country’s health department. After the boy, Billy Caldwell, ended up in the hospital from a seizure, the health department made an exception for him and allowed him to regain access to the oil.

CBD products are widely available as food supplements in the UK, but because Leyland’s sister is so sick, she can only take medicine given to her by a physician. If GW Pharmaceuticals’ Epidiolex is approved in the UK, that would be her first chance at trying a cannabis-derived medicine.

Leyland, for her part, is co-producing and the main subject of a documentary called Separating the Strains designed to educate policymakers and the general public about the benefits of medical cannabis. “The nucleus of our film is not just my personal story, but my fight to get my sister access to this medicine,” says Leyland. “I have a medical marijuana card, I have a physician I can trust, and I can just go to the dispensary and pick up my medicine, but my sister lives in full-time care.”

Leyland is expressly in support of medical cannabis only, defying the stereotype of a DJ who likes to get high. Her mission is simple: to use epilepsy as a case study to open up a conversation about the medicinal benefits of cannabis. “This is an advocacy led mission,” Leyland says. “And one that is deeply personal.”