This might be good news for consumers, but it is really bad news for growers. 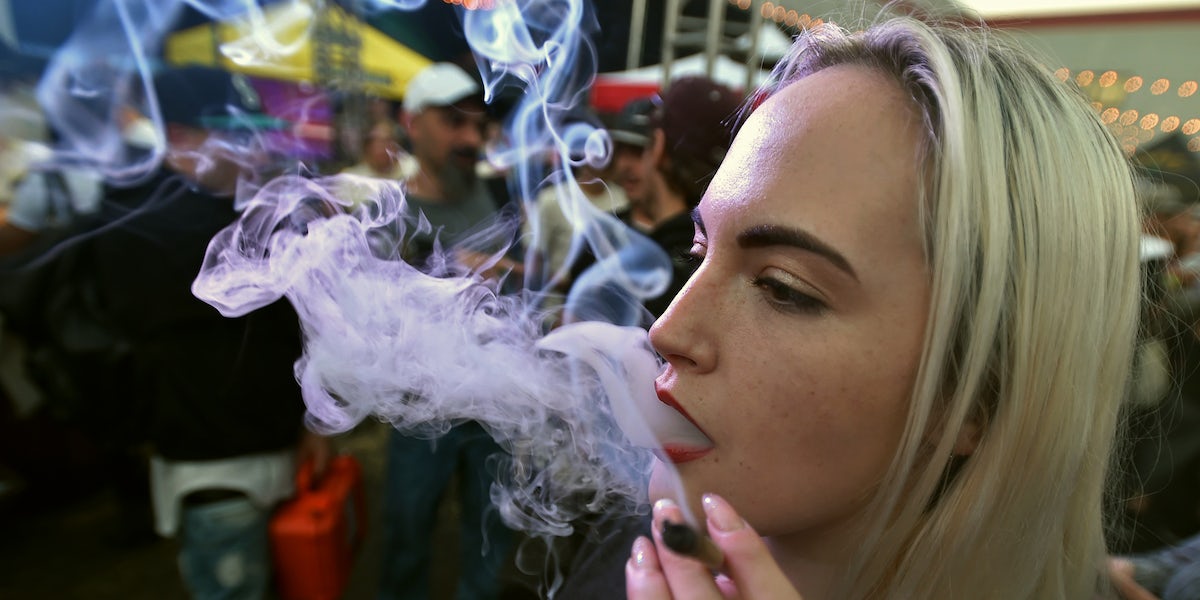 A woman from Seattle, smokes a joint at the first annual DOPE Cup, a cannabis competition in Portland, Oregon, on October 4, 2015. As of October 1, 2015 limited amounts of recreational marijuana became legal for all adults over the age of 21 to purchase in the state of Oregon. AFP PHOTO/JOSH EDELSON (Photo credit should read Josh Edelson/AFP/Getty Images)

Three years after officially legalizing recreational cannabis, Oregon has finally answered the question: ‘how much weed is too much weed?’ According to the state’s regulatory tracking system, Oregon now has a surplus of more than 1 million lbs of unsold flower and that’s far more than the state can consume.

Though it may not sound like a problem, the state’s surplus of marijuana, first reported by Willamette Week, is three times the amount that was grown last year and dispensaries can’t get rid of it quick enough.

As a result, the massive backlog has caused the price of cannabis to plummet as supply severely overwhelms demand and the shelf-life of that excess flower begins to deteriorate. Last summer, the price of a pound of flower sat at $1,500 a pound. That price has now fallen to $700, while The Guardian reports that some dispensary owners have been receiving calls from desperate farmers looking to get rid of their crop for as low as $100 a pound.

The drop in the wholesale prices has been good news for consumers who can now stock up for an unheard of $4 a gram at certain Portland dispensaries. But with the states purchase limit set at one ounce of flower and the domestic possession limit at eight ounces, retailers and their customers just can’t keep up.

Oregon legalized recreational marijuana at the polls in 2014 with an emergency regulatory system launched in 2015 and full licensing regulations going into effect in 2017. After only a year of that fully regulated system, the state’s government has collected $68 million in taxes, but its relatively unlimited licensing regime has caused the cultivation business to explode.

Under the state’s new regulations, the Oregon Liquor Control Commission oversees marijuana licensing and sales in the state, but they have said that limiting those licenses is not within their power or their mandate.

That free market regulatory model is part of the reason Oregon is now producing more marijuana than it can sell. In just one year, the state has issued 1,824 licenses and nearly 1,000 of those are production licenses – a number which is expected to double this summer according to state records.

Another contributing factor is Oregon’s ideal climate for growing. Last year, that same climate was the reason for a shortage in supply when the state first launched its legally regulated marijuana market and heavy rains hit growers during peak harvesting season in October causing their crops to spoil.

At that time, demand far outstripped supply and hundreds of new farmers applied to address the issue. Now it appears that the state has overcorrected that problem.

With so much excess product, state officials and experts now worry that those who are desperate to sell will look to out-of-state customers. Since marijuana is still illegal under federal law, transporting it across state lines, even between two legal states, remains a crime and could draw unnecessary attention.

Until recently, federal authorities have expressed that they would not enforce the ban imposed by the Controlled Substances Act in states that had legalized so long as the state governments enforced strict regulations, including controls which prevent cannabis from crossing state lines.

With the rescinding of the Cole memo in January, the question of federal involvement in locally legalized markets has been up in the air. And though Attorney General Jeff Sessions has said that federal law enforcement does not have the resources to enforce marijuana laws, the Justice Department may be forced to get involved if Oregon’s surplus begins to spill over into other states.

Enjoy the latest and greatest from Herb, enter your email below to get exciting cannabis updates delivered to your inbox.
April 25, 2018 — Last Updated
Written by Miroslav Tomoski