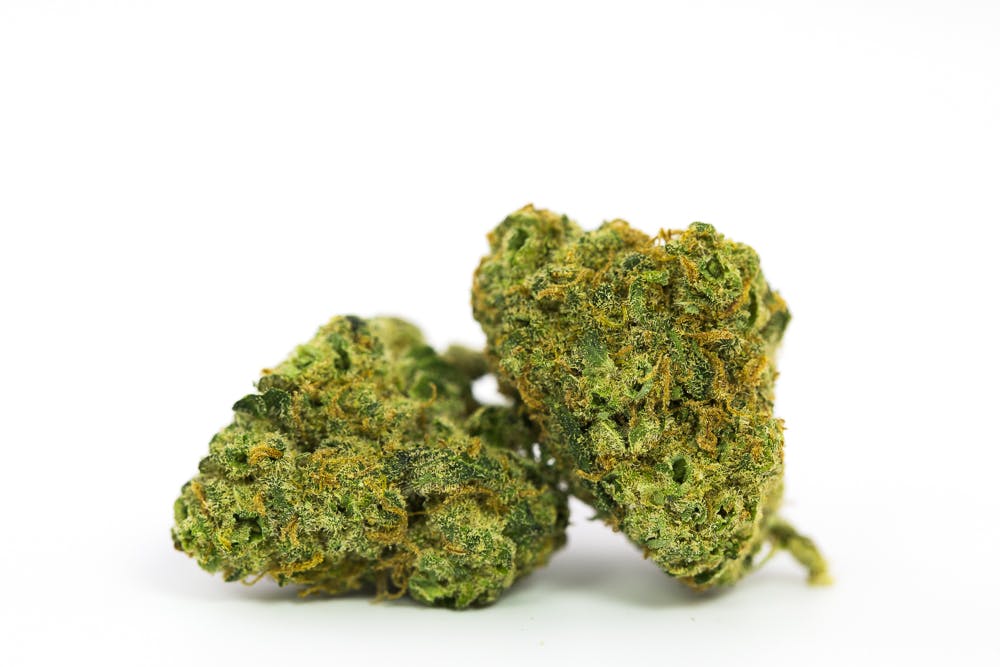 In the mood for a soothing indica? Romulan is a charming indica-dominant hybrid with plenty of mind-warping effects. While this strain is sedative and drowsy, Romulan won’t knock you out quite like other indica strains. You may not get much done once the high kicks in, but the overall experience is not overpowering. Grab Romulan when you are looking for a mellow evening or something to do on a rainy day.

Ready for a mind-warp? Thanks to this strain’s potent cerebral effects, breeders named Romulan after the Star Trek humanoid race.

Though considered an indica, the herb produces a foggy head-high that can make it difficult to get things done. If you need to focus on something serious, Romulan certainly won’t help much.

However, the herb does produce a very strong full-bodied experience that relaxes muscles and eases tension. These physical qualities make Romulan a great choice for winding down after a long day. When you feel like you need some serious rest and relaxation, Romulan can facilitate the process.

However, Romulan is considered 75% indica and 25% sativa. This means that while there will be some seriously drowsy effects, it won’t wipe you out nearly as much as a pure indica stain like Afghan Kush. Instead, Romulan provides a very mellow, and calming experience.

Recreational consumers should save Romulan for the evening or a rainy day. If you’re hoping to settle down for a movie night, spend some time playing video games, or relax by a warm fire, Romulan will loosen you up and help you decompress.

Overall, Romulan is a high-quality indica that won’t completely knock you out. Yet, it provides substantial sedative and pain relief effects.

If you’re searching for an effective indica that isn’t overpowering, Romulan is perfect.

Romulan is a cross between White Rhino and an unknown indica. White Rhino is an indica strain famous for its potency and heavy body high.

Though the precise genetics of Romulan is unknown, it likely also includes an Afghani landrace strain. A pure indica, the suspected Afghani lineage boosts the physically sedative qualities of Romulan.

This indica hybrid is not the most potent around, but it can pack a punch. Some tests have put Romulan as high as 22% THC, with the average range being between 18 and 22%.

Romulan produces hardly any CBD, so this strain is not recommended for medical conditions that respond well to the cannabinoid.

As far as aroma is concerned, Romulan is a very savory strain. It has a bit of pungency that can come across as acidic. Coupled with some crisp pine and ample earthiness, Romulan has a forest-like vibe. The taste can be described as sharp with a slight musk.

Marijuana enthusiasts will recognize the Indica heritage of this plant in its bud structures. Stout, dense buds have tightly coiled leaves which curl in towards the stems. A layer of white crystal trichomes gives them a frosted looking, hinting at the THC-heavy high waiting for cannabis consumers.

Thanks to an above average THC level and classic Indica effects, medical marijuana patients may find this strain is an effective remedy for a whole host of ailments, symptoms and conditions.