CBD for Dogs with Arthritis: How My Old Poodle Became His Playful Self Again

Bo, a 13-year-old poodle, was in so much pain he could barely sleep or eat. Then, his owner Alexis, like other pet owners across the country, discovered CBD for dogs with arthritis. 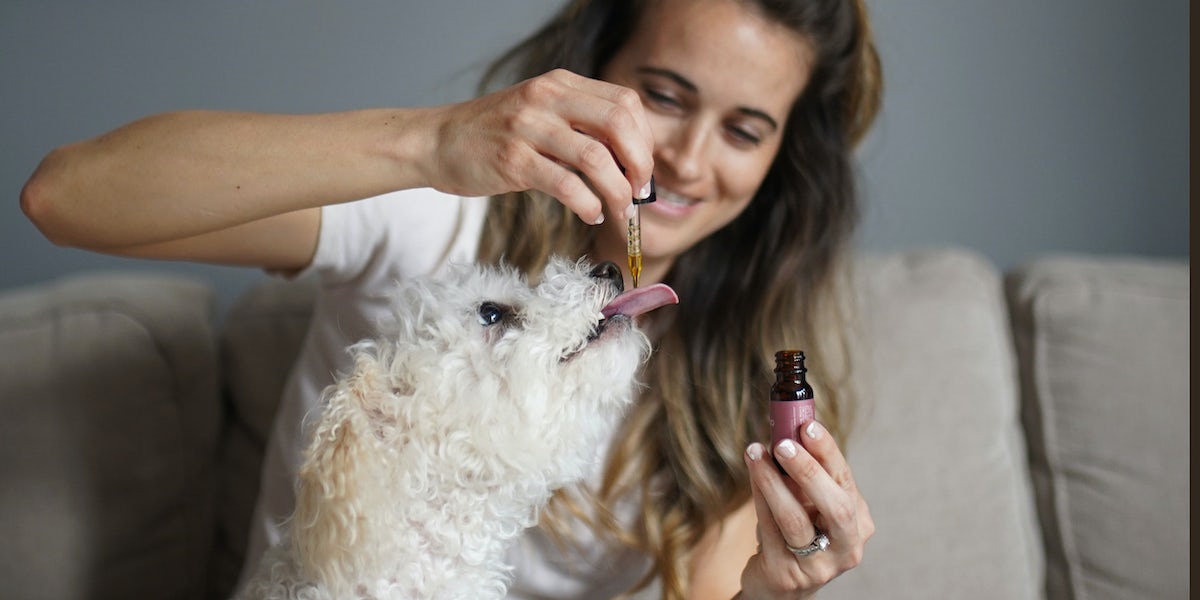 Alexis Rosenbaum knew something was wrong. Bo, her 13-year-old miniature poodle, hadn’t gone to the bathroom for three days. He couldn’t lift his head, eat, drink or sleep. Usually a playful and energetic poodle, Bo had to be carried around in a baby sling on Rosenbaum’s chest, but he still whimpered and cried from the pain.

“It was horrible,” recalls Rosenbaum. “It really threw us for a loop because he was always so playful and active.”

When Rosenbaum took Bo to the veterinarian in New Jersey, she learned her precious pup, with his big floppy ears and curly white fur, was in excruciating pain from osteoarthritis, a common condition among aging animals. The vet prescribed him anti-inflammatories and pain meds, but they made him lethargic, taking away the spark that made Bo Bo.

Gary Richter, holistic veterinarian and author of The Ultimate Pet Health Guide, says he hears these stories often. Just like humans, dogs, as they older, get osteoarthritis—an inflammation condition that causes the cartilage in one’s joints to wear down—and the meds they’re prescribed come with a host of side effects.

CBD for Dogs with Arthritis

Rosenbaum kept Bo on anti-inflammatories for six months, but frustrated by his lack of progress and concerned about putting him on something more serious, she began looking for other treatments. Soon, she realized dogs, just like humans, have an endocannabinoid system and decided to try giving Bo a low dose of CBD for dogs.

Much to her surprise, after only two to three weeks, in combination with diet and lifestyle adjustments, Bo’s condition began to improve. He was “more comfortable, more calm” and “not so tense,” Rosenbaum recalls.

Bo’s experience isn’t unique. CBD for pets is one of the fastest growing CBD markets. New Frontier Data recently reported that hemp-derived CBD pet sales reached $13 million in 2017 and are expected to reach $125 million by 2022, growing at a rate of more 50 percent per year.

In a recent online survey, soon to be published, of 1,068 pet owners, nearly 80 percent reported buying hemp or cannabis products for their dogs, and 44 percent said the weed-based items were more effective for pain relief than “conventional” meds.

Until recently, however, there were no clinical studies on the safety and efficacy of giving dogs CBD. That changed in July when researchers at Cornell University published the first clinical trial giving CBD to dogs with osteoarthritis, finding it decreased pain and increased activity.

“It’s literally the first clinical trial looking at treating any disease with cannabis in animals that’s been published so it’s kind of a big deal,” says Richter.

The researchers gave the dogs two milligrams of CBD per kilogram of dog weight, a dose which, Richter says, is probably too high, but, nevertheless, didn’t cause any reported side effects.

Alexis administering CBD for dogs with arthritis to her poodle, Bo. (GIF courtesy of Rosebud CBD)

It typically requires trial and error to find the optimal dose of CBD for pets, said Rosenbaum and Richter. Generally speaking, though, if a dog is more tired than usual, the dose is too high.

Rosenbaum gives Bo a drop of CBD for every five pounds. These days, she says, Bo acts like it’s a treat. When she unscrews the childproof safety cap, he hears the sound, comes running happily into the kitchen, and takes the oil straight from the dropper.

CBD for Dogs: Side Effects

As for side effects, Rosenbaum says Bo seems to be a little more thirsty and his appetite is robust and healthy, but overall he seems to be doing really well. He’s less lethargic than when he was on the anti-inflammatory drugs but still is able to sleep through the night without waking up in pain. “He just seems more comfortable,” she says.

Luckily, Richter points out, the worse that can really happen with CBD for dogs is sleepiness. He does warn, however, that giving anyone a new substance can provoke a little upset stomach, so diarrhea could also be possible.

Is CBD Oil for Dogs Legal?

What makes matters even harder is the legal position veterinarians are in at the moment. Because of the federal status of cannabis, many vets are afraid to make recommendations about CBD for dogs with arthritis. Even in states with medical and recreational cannabis laws, like California, animals were never included in the legislation. Although some vets will speak with pet owners about the subject, others may refuse for fear of losing their professional licenses.

California could be the first state to change what, Richter calls, a “crazy situation.” The legislature is considering Assembly Bill 2215, which would extend the state’s current cannabis law to control and regulate cannabis products for pets. It would also “allow a veterinarian to discuss the use of cannabis on an animal for medicinal purposes without being disciplined, denied, revoked or suspended by the Veterinary Medical Board.”

Canada could be moving in this direction too. As of this month, the Canadian government approved its first clinical trial using cannabis in pets. Canopy Health, one of Canada’s largest cannabis companies, will be investigating CBD for anxiety in dogs.

Hopefully this movement in the arenas of politics and science will soon help pet owners access safe and trustworthy information on cannabis and CBD. In the meantime, pet owners like Rosenbaum are continuing to discover CBD for dogs with arthritis on their own.

These days, Rosenbaum feels like she finally has her dog back. Bo’s no longer lazy and lethargic, napping most of the day away. Instead, just like when he was a puppy, he’s back to his frisky self, frolicking and rolling around in the grass at his local park. Although, Rosenbaum admits, he still doesn’t mind being carried around like a baby every once in awhile too.

Enjoy the latest and greatest from Herb, enter your email below to get exciting cannabis updates delivered to your inbox.
August 31, 2018 — Last Updated January 28, 2020
Written by Michelle Janikian