From the longest blunt to the biggest nug, these are the cannabis world records. 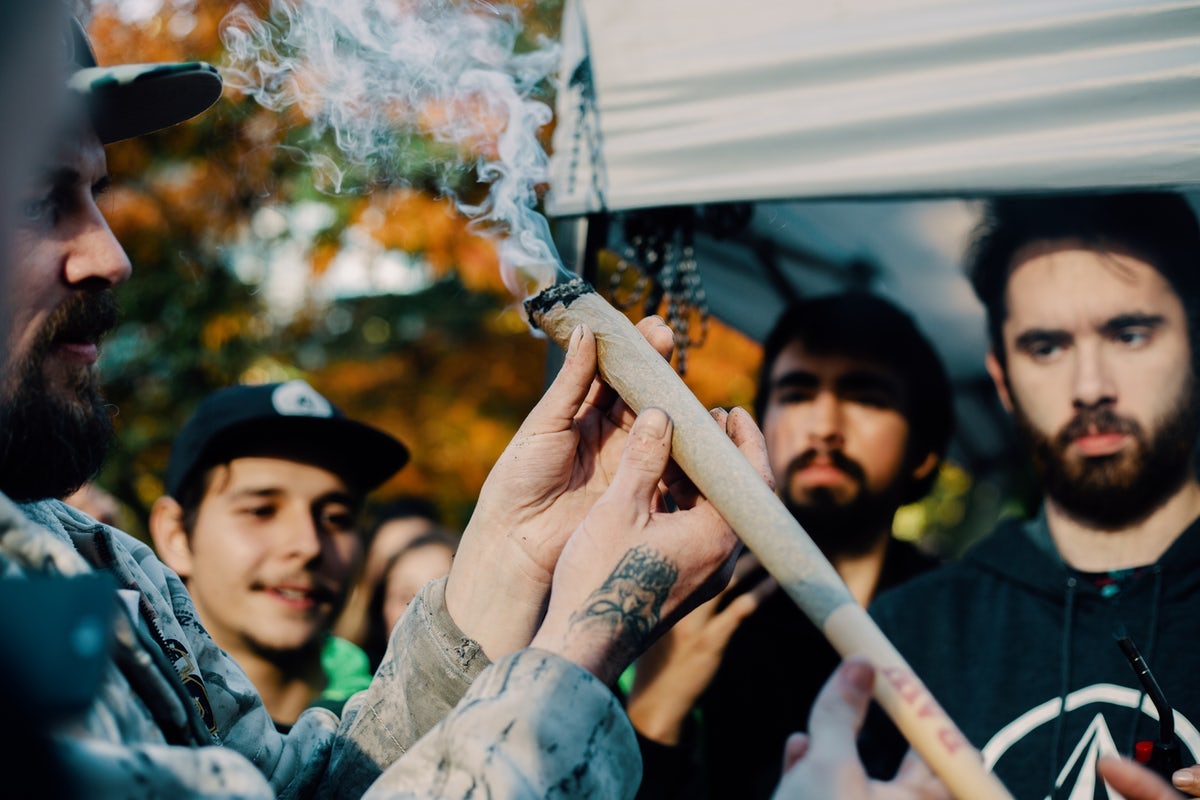 Setting a world record is something many strive for, but few actually achieve. Whether it’s the world’s longest fingernails or the largest ball of yarn, people have thought of every possible way to get their names into the record books. Cannabis connoisseurs are no different. Although some of these categories might not appear in the Guinness Book of World Records, they’ve been well documented and set a high (no pun intended) bar for weed lovers around the globe.

1. Biggest Weed Farm in the World

No grow-op comes even close to the size of Aurora Sky in Alberta, Canada. The 800,000-square-foot greenhouse is on 30 acres of land. To put that into perspective, Harborside Farms in Salinas Valley, California has 360,000 square feet of grow space and Tweed, owned by Aurora’s competitor Canopy Growth, has a facility that’s 350,000 square feet. Aurora anticipates Aurora Sky will be churning out 8000 kilograms of green a month by January 2019. Good thing cause Canada currently has a weed shortage.

Tony Greenhand is known for his insanely huge joints. For 4/20 in 2016, Greenhand outdid himself. A standard joint wouldn’t suffice, instead, over the course of five days, he rolled a massive 4.20-pound watermelon joint, requiring a hose for proper smoking. Greenhand even created a stand to comfortably house the massive creation.

In 2017, rolling legend Weavers unveiled the world’s biggest blunt. The gold “bazooka blunt” had a whopping 5 pounds of herb inside of it. It took a day just for Weavers to grind all the weed. (Ouch.)

Dab Stars is undoubtedly one of the biggest names in cannabis concentrates so it’s no surprise they hold the record for the biggest dab ever smoked. The company hosted an event in 2015 with one goal in mind: break the previous dab record of 90 grams, and break it by a lot. Dab Stars did just that when they sparked up just over 400 grams of hash.

5. Most Weed Smoked By One Person

Cannabis advocate Irvin Rosenfeld is the epitome of a cannabis legend. His record is actually recognized and featured in the 2014 Guinness Book of World Records under “most pot consumed.” At the time of the record-setting achievement, Rosenfeld had consumed over 115,000 joints, more than any other individual in documented history.

Any good weed lover experienced a hotbox or 100 in their high school days. However, during the 2015 Kush Cup in Vancouver, one group filled a room with enough smoke to get everyone high. How did they do it? 422 grams of concentrates were poured into hot pans that instantly created thick, billowing clouds of milky, THC-filled smoked, setting an official world record.

7. Strongest Indica in the World

While this record is ever-changing, a few strains continue to dominate the competition. Currently, Irish Cream is one of the strongest if not the strongest indica strain on the market. At competitions, this strain continues to deliver consistent results, despite the grower or environmental conditions, coming in at over 27% THC. For a complete list of the strongest strains on earth, check out Herb’s guide.

8. Strongest Sativa in the World

Ghost Train Haze has broken records at previous Cannabis Cups, coming in with a higher THC content than any other entry. With an unbelievable THC potency of 25 to 27%, the growers, Rare Dankness Seeds, closely guard their mind-blowing sativa strain. For a complete list of the strongest strains on earth, check out Herb’s guide.

Once again, any strain that manages to earn this title likely won’t keep it for long. There’s just too much competition among growers these days. That being said, it’ll be hard to beat hybrid Chiquita Banana, which has reached over 33% THC. This legendary strain is a cross between OG Kush and Banana. For a complete list of the strongest strains on earth, check out Herb’s guide.

This video from YouTube channel Grow Pot Cheaply is proof that you don’t have to have a huge grow with dozens of plants to get a big harvest. In it, a master grower shows how he got a whole garbage bag full of nugs off a single plant.

This tree ends up yielding 2.48 lbs of bud. What makes it even more amazing is that it was an auto-flowering plant. The weight would easily have topped 3 lbs if the buds were at the proper moisture level, or if the plant had been able to finish.

This guy uses a spare room, and a single 600-watt HPS Apollo setup with a UFO hood, then transfers his plants under an 800-watt Black Diamond full spectrum LED to “dense them up” before harvest. He begins with his Royal Queen Auto-Critical seed in rock wool cubes for a strong start.

A different take on airflow than most growers, he uses a mostly closed system. CO2 plays a minor role but isn’t put up to 1,500 ppm. His was on a timer and stayed between 800 to 1200 ppm, and when lights were off dropped down to about 600 ppm. The temperature held steady at 78°F with lights on, instead of increasing the temperature higher with CO2. Even in his tent setups that don’t use CO2, it simply takes the air from inside the house, which has a higher CO2 level due to the air we exhale.

Grow Pot Cheaply has lots of videos on setups, grows, harvests, and even smoke reviews of yields, so you can follow the process from start to finish. We can’t promise you an epic three pounds though.

The cannabis grower known simply as “Remo” is very likely responsible for growing the biggest buds on planet earth. Some of them are, no exaggeration, the size of his hand and forearm. When he holds them up, they look like giant bouquets of flower. I guess they are—the kind of flower we love most, that is.

Enjoy the latest and greatest from Herb, enter your email below to get exciting cannabis updates delivered to your inbox.
August 14, 2019 — Last Updated September 28, 2020
Written by Dee Giznik