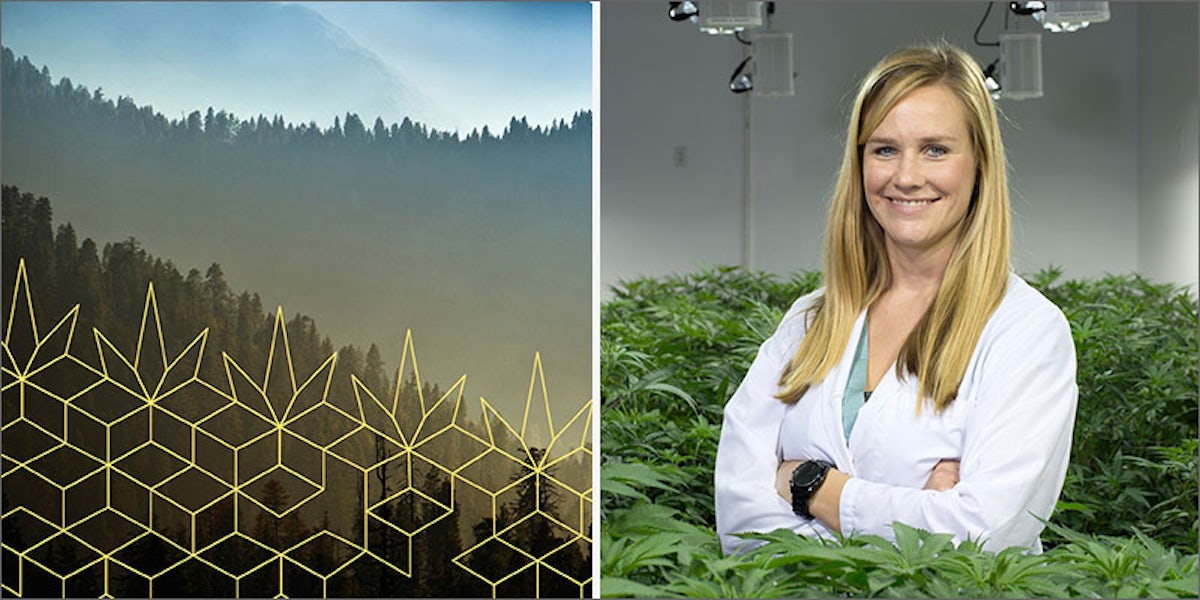 Dr. Allison Justice, Vice President of Cultivation for the California cannabis company, Outco Labs is playing a huge role setting standards for the cannabis industry, as she seeks to be a leader in the industry through data collection and analysis.

Dr. Justice graduated from Clemson University with a PhD. in Plant & Environmental Science. During her time at Clemson, Allison taught Greenhouse Management to undergraduate students where they focused on organic methods and production.

Currently, she is managing the cannabis greenhouse she designed in the San Diego area with OutCo. The first of it’s kind, the automated greenhouse can turn six crops a year, and makes it easy to collect data on every aspect of growing the plant.

Who was your mentor(s)? How important were they and how, if at all, are you paying it forward?

My mother got me into plants. She was owner and operator of a 200 acre ornamental tree farm in Georgia. It was a beautiful thing to see and grow up with my mom succeeding in an industry normally run by men.

It made me fall in love with plants in general – hard work, and proving you can do just as much hard work with plants as men. From my mother, I learned how to run a tractor, how to change tires, among many other things. I remember that there were many men working for her, it was interesting to see as a young woman.

It’s also why I went to school for horticulture. Following college, I worked at the farm for a bit, and then attended graduate school. After earning my PhD, I started a company that works with poinsettias.

It was a large greenhouse and consulting group. I realized it crossed over into cannabis when I was consulting, and soon after, I decided to pivot from ornamental trees to cannabis.

I was always a big supporter of cannabis, but had zero opportunity to get into the industry in the South. However, I was active in efforts to legalize hemp.

What makes a great leader in cannabis?

It takes a great leader to identify a great idea, then digging into sister industries outside of cannabis. I’m a huge advocate in using science, and data collection.

The way the cannabis industry is now – I see a lack of research methods behind the growing methods. I’m pushing forward on the education front, pairing with vendors, for scientific research on the cannabis plant. I hope to start publishing my findings, in order to share the information with others.

Overall, some people in cannabis are very opinionated, and at the end of the day, they don’t have any scientific backing to prove their opinions – and that’s frustrating.

How do you feel about being a woman in weed?

Women are definitely the minority, but I was also in other commercial industries before cannabis. Horticulture is male dominated, its hard sometimes but it comes down to showing your skills through what you can produce.

In commercial horticulture for cannabis, it’s exiting to wake up because there are so many unanswered questions! The plant is new to the legal space, and it’s very exciting.

Sister industries, like tomatoes, have been studied for decades, but there’s no real data out there for cannabis.It’s exciting to be a front man (or woman) in getting that information and publish it for all to use. At OutCo, we want to be progressive company, investigating the “how” and “why” of best practices. Anything from lighting spectrum, fertilizer ratios, pesticides.

We will keep some secrets, of course, but I want us to be first to prove methods – and then share it with others. After all, when you’re first to something, there’s nothing wrong with sharing the information.

Advice to other women in weed?

We got our first intern from Clemson, and she’s out here (in California) for three months. I’m telling her that now is the time, the opportunity to get into the industry and make a name for yourself and do big things.

Nowadays, the best way to get into the industry is interning for a big cannabis company, networking, going to Women Grow meetings. Use your education and experience to keep pushing forward!

Enjoy the latest and greatest from Herb, enter your email below to get exciting cannabis updates delivered to your inbox.
May 02, 2017 — Last Updated
Written by Chloe Sommers