Now Reading:culture | Everyone’s Talking About Veganic Weed (And Why It Will Save The World) 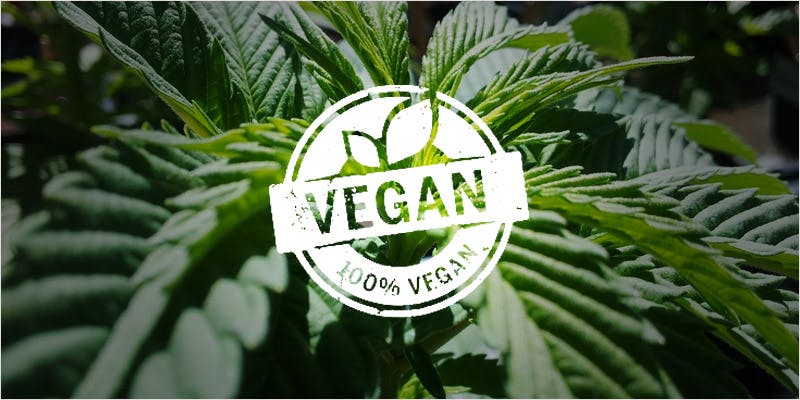 A new term is making its way onto dispensary menus: veganic. But, what makes vegan cannabis different from the regular stuff?

A new term is making its way onto dispensary menus: veganic. But, what makes vegan cannabis different from the traditional stuff? And why are growers making the switch to veg-friendly cultivation practices? Here’s why everyone is talking about veganic weed.

What do you mean cannabis isn’t vegan?

Cannabis is a plant. Doesn’t that make it vegan by nature? Well, not exactly. Many of the plants we eat are fertilized with animal products. Bone meal, fish hydrolase, and blood meal are all common organic fertilizers. As their names suggest, all of these products contain animal materials.

Adding animal materials to your plants is a quick way to get a huge nutrient boost. Unfortunately, this means that the plants you’re smoking still rely on animal agriculture. Bad news if you’re an environmental or ethical herbivore.

Yet, a new trend is spreading across the cannabis sphere: veganic weed.

What is veganic weed?

“Veganic” is a hybrid term for vegan and organic. Veganic growing uses no animal products or synthetic pesticides or fertilizers. That’s right, it’s all plant-on-plant action.

Several growers and dispensaries are starting to add veganic cannabis to their menus. California’s Buds & Roses now offers several different veganic strains. The famous grow master Kyle Kushman has created a line of veganic nutrients along with a handful of growing videos.

Vegan growers just say no to animal fertilizers. Supplemental nutrients are added via compost teas, worm castings, and plant-based meals. Not only do plants love these products, but they are low cost and reduce some of the environmental impact of cannabis growing.

Indoor grows, in particular, are under fire for their large amounts of energy consumption. Eliminating animal products is one step toward more earth-friendly grow practices.

As the cannabis industry continues to grow, veganic herb allows users to get a little more choosy. While you once were stuck picking up some plastic baggie bud in a back alley, today’s cannabis scene is quite different. Herb-lovers rejoice in the average dispensary selection. From gluten-free edibles and infused sodas to purified “clear” hash oil and veganic flower.

Now more than ever, consumers can influence growing practices with their purchasing decisions. But, veganic are more than the next big growing trend. This gardening method produces real results.

Make no mistake, opting for plant-based products does not equal a decrease in potency. A Buds & Roses’ veganic high-CBD strain took first place in the High Times Cannabis Cup and Carnival earlier this year. The strain features a whopping 13% CBD, one of the highest on the market. Other Buds & Roses strains feature equally impressive results. Veganic Platinum Cookies, for example, has a THC content of over 22%.

Vegan techniques aim to get the greatest yield with the least amount of input. This mimics what plants encounter in their natural environments. In nature, plants are exposed to some amount of animal matter. Insects decay and add nutrients to the soil. Every once in a while, an animal might decay as well.

Yet, plants are rarely exposed to the amounts of decaying animal products used in fertilizers. So, plants take quite well to vegetarian growing techniques. Kyle Kushman explains the benefits best:

Animal by-products take a long time to fully breakdown. In order for plants to metabolize the nutritive properties the process of decomposition makes them available. During this process and after the nutrition is metabolized there are residues left behind. Over time residue builds up, eventually having a negative effect on soil pH. These residues affect the taste of the finished product and are impossible to completely flush from the flowers. You can taste it no matter what you do.

So, the point being? If you want tasty plants that really soak up nutrients, go vegan. With Kushman’s videos and a wide variety of veganic products to choose from, animal-free growing is easier than ever.

Have you tried veganic cannabis? Share your thoughts with us on social media or in the comments below.