Now Reading:legalization | Is This Justice? Life in Jail for Cannabis, But Rapist Only Gets 3 Months 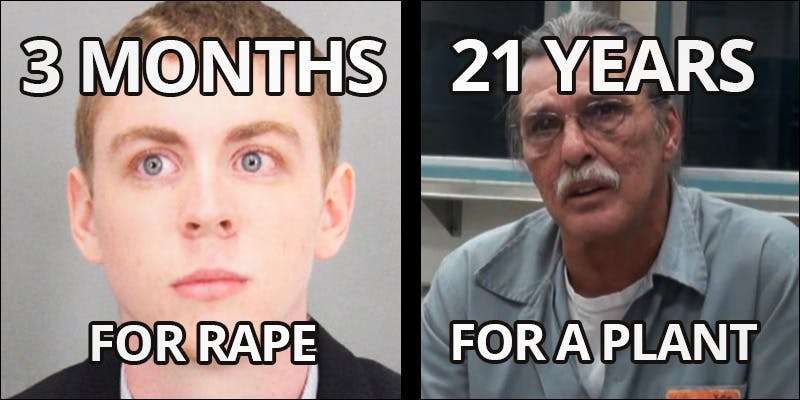 Is This Justice? Life in Jail for Cannabis, But Rapist Only Gets 3 Months

A man serves 21 years in prison for minor cannabis crimes. Meanwhile, a convicted rapist is freed after 90 days. That, my friends, is justice in America.

While America might have once been deemed “The Greatest Country On Earth,” things are quickly changing here at home. With a broken justice system, backward laws and corrupt politicians, it’s a wonder our nation hasn’t broken into complete and utter chaos. Although, one could argue that it has, based on the recent court rulings surrounding proven rapists and their jail sentences, in comparison to the sentence of those found to have committed nonviolent crimes, like growing cannabis. The jail times, and lack thereof are absolutely astounding.

In Missouri, after being charged with three separate cannabis crimes, the sentence is life in prison. Normally, there are no questions asked, and perpetrators are sent for a mandatory imprisonment.

Jeff Mizanskey was one these three-time offenders, having sold a small amount of cannabis to a family member, possessing less than three ounces in his home and driving a friend to buy cannabis from, what ended up being, an undercover police officer.

While Mizanskey may have broken the law, he certainly didn’t harm anyone in the process. Despite being a non-violent offender, Mizanskey was sentenced to life in prison.

Even scarier, 28 states, including North Carolina, Pennsylvania and Utah, still enforce similar three-strike laws. Despite the cruel and unusual nature of the punishment, these laws have been deemed constitutional and are routinely enforced.

Now, think back to a few months ago when Stanford golden boy, Brock Turner, was convicted of the violent offense of raping a young woman who was incapacitated from alcohol use. He was charged with two counts of rape, two counts of felony sexual assault and one count of attempted rape.

Ultimately, Turner was found guilty on three counts of felony sexual assault. His jail sentence? Six months in jail, of which he served only three. That’s right, 90 days for violently raping an unconscious woman.

Even more unbelievable than the three-strike laws themselves is the way they are enforced. In some states, judges have the option of deeming a charge a misdemeanor or felony, based on their discretion. While this rule is meant to allow excess punishment for violent drug offenders, it is often used more strongly when a case involves minorities.

In the case of Jeff Mizanskey, after serving 21 years of his life sentence, he was finally set free thanks to the help of some good Samaritans who never stopped fighting for his justice. Despite his freedom, nothing can make up for the more than two decades Mizanskey spent behind bars for a committing a nonviolent, victimless crime.

When considering that monsters like Turner are set free after just three months, able to rape another victim and potentially ruin their entire life, the unfairness and disgust of the sentences are made even more apparent.

Our judicial system is completely backward and offers violent offenders “Get Out Of Jail Free” cards, while medical patients are made to feel worse than rapists for seeking out the life-saving herb they desperately need to survive.

Do you think America needs to reform their cannabis regulations and insist on harsher punishments for violent offenders? Share with us on Facebook, Twitter or in the comments below.