Now Reading:culture | Hippies Vs Hipsters: The Evolution Of Cannabis Culture 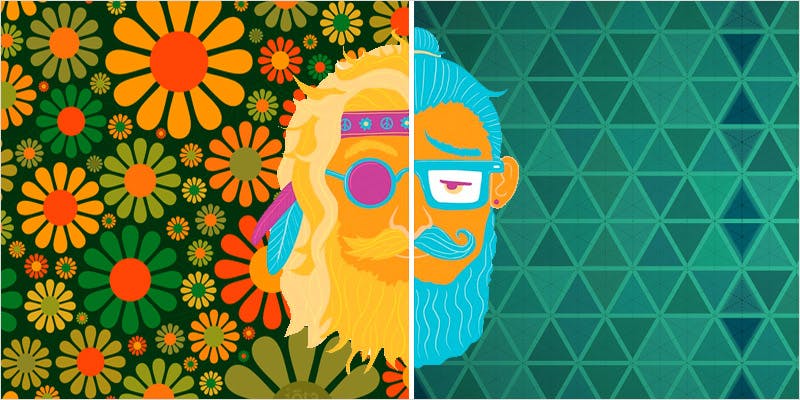 Hippies Vs Hipsters: The Evolution Of Cannabis Culture

Cannabis has transformed from a spirited, rebellious herb to an elite commodity. Here’s a super brief history of cannabis cultural evolution.

For many, the Hippie era represents the golden days of cannabis history. But, how much has cannabis culture changed over the years? Do modern hipsters have the same rebellious relationship with the herb? To paint an general picture of how far we’ve come here is a very brief history of the evolution of cannabis culture.

It was a time of free love, psychedelic exploration, and rebellion. The threat of nuclear war was constant and the horrors and cruelty of war were broadcast to the nation for the first time.

Overall, the 20-year period between 1960 to 1980 was a time when values, lifestyle, and social institutions were under intense scrutiny.

In a reality where death and destruction were imminent, where civil establishment began to collide, it was time for a radically different worldview. The public turned inward, experimenting with consciousness and different presentations of lived experience.

In 1957, at the very beginning of the Hippie era, famous Harvard professor Timothy Leary began advocating for the therapeutic use of psychedelic mushrooms and LSD.

During the same era, psychiatrists like Dr. Lester Grinspoon began speaking out against the standard anti-cannabis propaganda and advocating for the herb’s therapeutic use.

The first issue of High Times came out in 1974, spreading cannabis information and advocating legalization.

If Leary were alive today, he might suggest that cannabis became a way to “turn on, tune in, and drop out.”

You can make the argument that technology has fueled the evolution of cannabis culture. Back in the 60s and 70s, the majority of cannabis products were smuggled in from outside of the country. However, the

However, the War on Drugs and the harsh efforts to stomp out the international drug trade made cannabis import and distribution increasingly more difficult.

Yet, the herb prevailed. Partly aided by the boom in hydroponic growing techniques in the late 80s to early 90s. Discrete, indoor horticulture methods made it far easier for domestic growers to cultivate their own crop.

Not only were these crops of higher quality than imported brick weed, but it sparked a rising cannabis horticulture community that continued to grow and develop underground.

There are many reasons behind this shift, but the rise of the internet is a big component. Thanks to easy access to positive information on the plant, Americans are changing their views on cannabis.

Recent reports show that it is unlikely to find a negative portrayal of cannabis in social media, the primary news source for young people these days. Back in 2015, 58% of Americans thought that cannabis should be legalized. Other polls suggest that the public now believes that alcohol and opiates are more harmful than cannabis.

Cannabis has officially moved into the mainstream. For the first time in history, the American majority supports both recreational and medical cannabis. Now, it’s time for the herb to proliferate.

Once again, technology is changing the way we view cannabis. For the past few decades, the herb has transformed from a token commodity for barefooted hippies, to a beloved past time for lazy high school couch potatoes, to a consumer good marketed as a novel, high-class treat.

Cannabis is not federally legal yet, but gone are the days where the herb represented first and foremost an act of deviance. Now, boutique cannabis products and brands are making their way to dispensary shelves.

In 2014, the New York Times ran their first advertisement for a cannabis technology startup. If you have the funds, you can now purchase fancy $700 vaporizers and luxury armchairs designed to make cannabis smoking a little more comfortable.

Rebellious hippies have been replaced by hipsters. These newcomers combine the high-tech market mentality that arose in the 1980s with an entrepreneurial, green, sharing-economy spin.

Millennials, for example, are almost twice as likely to experiment with homeopathic or natural medicines than baby boomers and Gen Xers. Rather than smoke and snub off society, Millennials are also more likely to engage with brands and help companies design products that better suit their values.

In a way, the rising hipness in cannabis culture is where Bohemian ideals meet innovation. Most recently Silicon Valley entrepreneurs have set their gaze on the cannabis scene.

One new Silicon Valley-backed startup, Meadow, is like Uber for cannabis. It picks up bud from your favorite dispensary and delivers it to your door. The same group also has a new product, called CannabisMD. CannabisMD shuttles a prescribing doctor to your door for a home visit.

Everyone loves the herb

These days, all sorts of people use cannabis. But, the herb is quickly becoming the posh thing to do. While the herb was once associated with grungy, counter-culture rebellion, it’s since been adopted by some of the most elite.

Perhaps this is because the herb is in an odd legal space at the moment. The cannabis industry is ripe for innovation, and more people see it as an opportunity to make quality cash.

In time, perhaps the novelty of cannabis will wear out. Maybe there will be a day when cannabis finally becomes a regular part of everyday life without added media attention. In the meantime, it’s safe to say that the herb has had an interesting role to play in U.S. cultural history.

This article barely skims the surface on the intricate relationship between cultural evolution and this mysterious plant.