More people than ever are buying weed online

It’s not legal anywhere in the U.S. 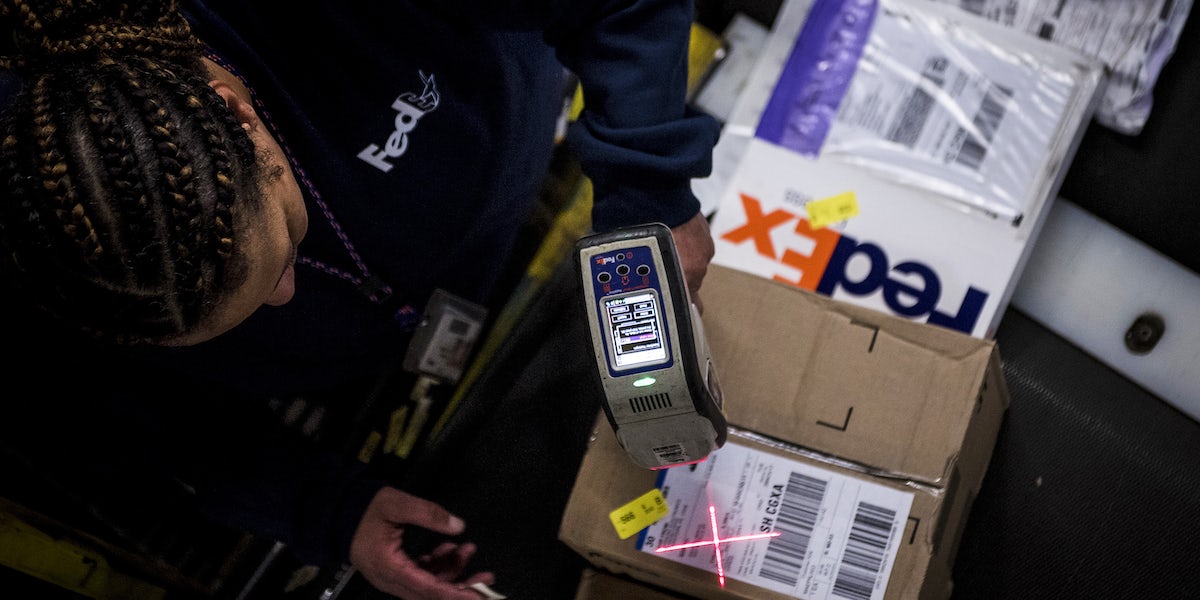 An employee scans packages for delivery at the FedEx Corp. shipping center in Chicago, Illinois, U.S., on Monday, Nov. 27, 2017. The holiday shopping season is off to a strong start and retailers appear to be continuing the momentum today — Cyber Monday — the biggest online spending day of the year. Photographer: Christopher Dilts/Bloomberg via Getty Images

Most of us are accustomed to purchasing clothes, vitamins, books, music, and even groceries online. So it’s not a great leap to start thinking about a future where buying weed online is common too. According to a new study, more and more Americans are doing exactly that, reports Futurism.

The study, “Online Sales of Marijuana: An Unrecognized Public Health Dilemma,” was published in the American Journal of Preventive Medicine. It’s the first time anybody has scientifically analyzed online cannabis sales. Researchers studied internet searches and the resulting links.

In the 12 years studied, searches tied to purchasing cannabis online ballooned by 199 percent. By the last month of the study, June 2017, there were 2.4 million searches in a single month.

The searches weren’t restricted to states with legal recreational weed or even medical marijuana. In fact, for the first seven years of the study, there were no legal recreational states. All but two states of the 44 analyzed by scientists showed a growing number of searches every month related to buying weed online. (The six least populated states weren’t included in the study.)

In July 2017, after 12 years of collecting data, the first two pages’ worth of common links visited were analyzed. Forty-one percent of those links were to retailers offering mail-order cannabis.

While that might not be that interesting if cannabis were as legal as vitamins or pillowcases, that, of course, is not the case. Recreational marijuana is still illegal in 41 of 50 states. And even in the nine legal states, buying weed online is still illegal.

Many legal pot shops do let you pick your weed and place your order online. But you still must either show up in person to pick it up or have an approved delivery service do it for you. In any event, mail order weed is illegal everywhere in the U.S.

Legal states really hate when you buy weed online instead of visiting your local pot shop because they miss out on the taxes. Additionally, it’s much easier for underage people to fake their age when buying weed online.

Beware of scammers and law enforcement

Besides the fact that it’s illegal, buying weed online through places like Facebook, Instagram or Craigslist can easily get you ripped off. There is an army of scammers who specialize in showing pretty pictures of weed online. They take consumers’ money and then never send them anything.

Online “dealers” will go so far as to send text messages, luscious bud photos and answer questions. But once a deal has been reached and the buyer puts money into the seller’s account, communication is cut off. The weed never gets sent.

Law enforcement is another legitimate concern when buying weed online. Whenever cannabis crosses state lines, it becomes a federal offense. Even in legal states like Colorado, police have used social media platforms including Facebook, Twitter and Instagram to entrap and bust those buying weed online.

Cops even set up pages to pose as buyers in order to catch online dealers. Some of these fake social media pages created by cops come complete with back stories and photos of grow operations they claim to own, reports THCU Insider.

The study’s authors are calling for a crackdown on buying weed online.

Public health leaders need to intervene to prevent online cannabis sales, according to a prepared statement released by the study’s authors. One possible way to accomplish that, they point out, would be to convince internet service providers (ISPs) to remove mail-order retailers from search engines like Google.

Enjoy the latest and greatest from Herb, enter your email below to get exciting cannabis updates delivered to your inbox.
March 29, 2018 — Last Updated December 19, 2019
Written by Steve Elliott