Black Beauty is a strain like none other. This bud produces a 2:1 ratio of THC to THCV, a cannabinoid that is being studied for weight loss and diabetes care. 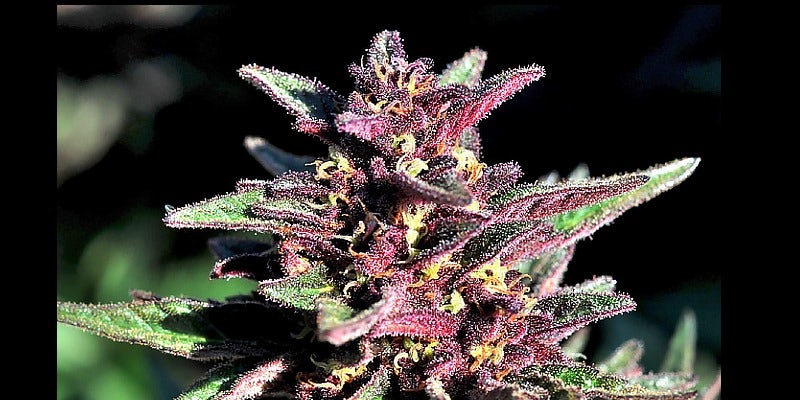 Black Beauty is a truly one of a kind bud. Not only does this plant flower in an unusual way, but it produces high concentrations of a cannabinoid known as THCV. Featuring deep black coloration, a pineapple smell, and a fast-hitting psychoactive experience, Black Beauty is one of the most strange strains in the world.

This strain was recently rescued by grower George Bianchini after a raid at Oaksterdam University in California. Now, this strain is an extremely rare find and produces one of the most unusual cannabinoid profiles around. Black Beauty produces a 2:1 THC to THCV ratio, though back in the day, this plant was known as Oaksterdam’s high-CBD strain.

If you happen to come across this mysterious hybrid, it’s certainly worth a taste. Not only does Black Beauty feature a tropical pineapple, floral aroma, but this bud provides a cerebral high with a fast onset. Unfortunately, you can expect the overall effects to wear off rather quickly.

The presence of THCV in this strain is thought to speed up the psychoactive effects of THC. The result is a clear-headed, energetic experience with a fast onset. While relaxed and enjoyable, strains high in THCV are thought to provide a more uplifting, cerebral experience overall.

Though Black Beauty is not a THCV dominant flower, this bud is a great one to pick if you’re hoping to avoid the munchies. Pure THCV has been found to decrease feeding and promote weight loss in rodents. However, studies have found that these appetite suppressant effects may not work as well when the cannabinoid is combined with THC.

However, while a strain like Black Beauty may not help you eat less, it can curb some of the munchies inspired by THC. So, after smoking this strain, you’re less likely to find yourself meandering over the freezer in search of pizza rolls.

Black Beauty is a gorgeous cannabis strain that produces deep purple, almost black flowers. Not only does this strain produce dark black buds, but it also produces a 2:1 ratio of THC to THCV. THCV is a lesser-known cannabinoid that has shown potential in animal models of weight loss and diabetes. Strains high in THCV are difficult to find.

Fascinatingly, when the growers put the plant under 24 hours of light, it remained in vegetative growth. However, when it was put under 18 hours of light, it started to flower. Typically, cannabis plants flower only when they’ve reached a 12:12 light cycle.

The odd timing isn’t the only way this bud suddenly started to change. While buds were once purple, they began turning black. Then six weeks into flowering, the plant started to hermaphrodite. Some female Black Beauty buds will develop yellow “banana hairs” that produce pollen on occasion.

Bianchini has since worked out three distinct genotypes from this strain. All three of which produce different cannabinoids and coloration. Only one genotype produces hermaphrodite buds. When grown outdoors, this strain produced more THCV. Indoors, THCV can be brought out by ultraviolet light.

While this strain may not sound so exciting for recreational consumers, this bud is extremely promising on the medical cannabis front. Though there is still work to be done on these plants, patients with Parkinson’s Disease, autoimmune diseases, inflammatory diseases, diabetes, and obesity may be interested in this plant and others like it.

Recent research on THCV suggests that the cannabinoid may prove useful for the future treatment of those with diabetes and obesity. It’s possible that this strain will one day be used as a key plant for the development of new cannabis medicines.

Like other cannabinoids, THCV also has anti-inflammatory, antioxidant, and painkilling properties. That makes Black Beauty a potentially great choice for cannabis patients suffering from neurological or autoimmune conditions. Though the research on the topic is only in its infancy.

Get 20% off premium weed and discover the latest products, news, and deals in cannabis.
April 15, 2017 — Last Updated
Written by Anna Wilcox