An article has been added to the Swiss Federation’s Narcotics Act that allows for scientific research projects. 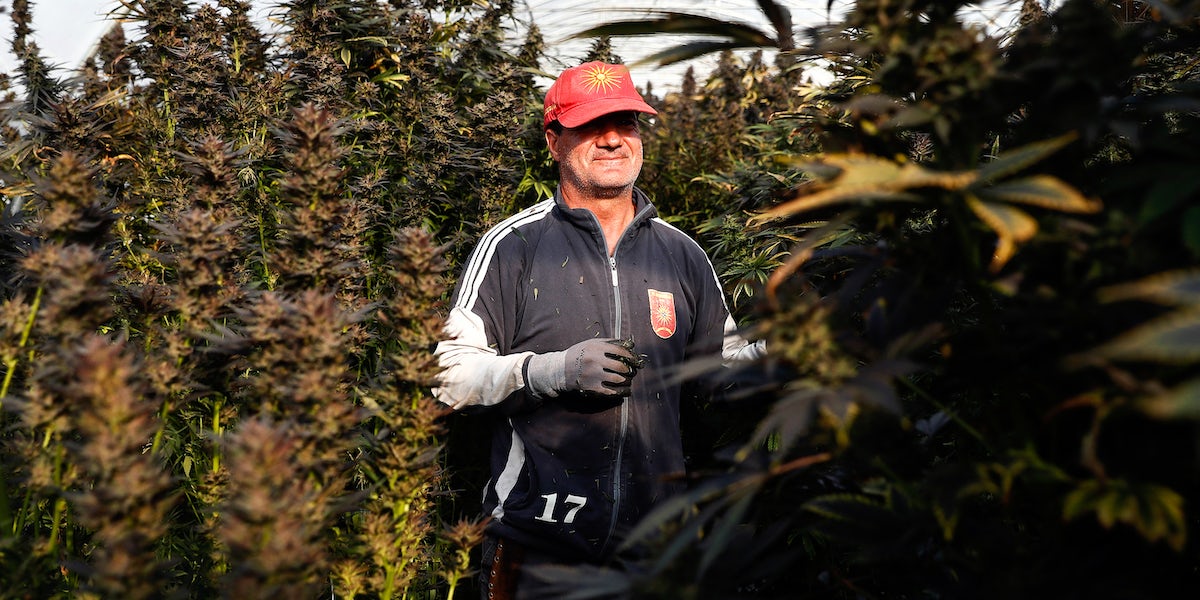 A worker looks on from between rows of cannabis plants at the KannaSwiss GmbH greenhouse facility near Kerzers, Switzerland, on Thursday, Oct. 19, 2017. KannaSwiss, a company founded in 2014, is already producing marijuana that meets Switzerlands legal standard containing no more than 1% Tetrahydrocannabinolknown as THC, the psychoactive chemical that gets you high. Photographer: Stefan Wermuth/Bloomberg via Getty Images

Cannabis could soon be legal in Switzerland. The Swiss Council of States, Switzerland’s smaller chamber of parliament, unanimously approved a bill allowing studies and pilot programs in the landlocked Alpine nation. The Council called for an experimental article in the Swiss Federation’s Narcotics Act that would allow for scientific research projects including trials of a “coffee shop” system of cannabis distribution similar to that of Amsterdam. Five Swiss cities have already called for such coffeeshop pilot programs.

The Ministry of Health rejected requests until now, maintaining there’s no legal basis for carving such exceptions out of the Narcotics Act. After rejecting the idea in November 2017, the Ministry pointed out that the Narcotics Act must be amended by an “experiment paragraph.” This would provide for the City of Bern to review future applications.

“There was a need for scientifically based decision-making principles for the future regulation of cannabis,” according to MP Roberto Zanetti, representing the Social Democrats. The City of Bern had previously requested a cannabis pilot project several times. Under the proposed trial, 1,000 people who already use cannabis would be allowed to purchase it legally.The pilot project, which would allow cannabis purchases in pharmacies, would be scientifically evaluated and serve as a basis for future cannabis policies.

The bill now goes to the larger chamber of parliament, the National Council, where its fate rests. The Council of States has 46 members representing the Swiss cantons (federal states). It is the lesser chamber of parliament, analogous to the U.S. House of Representatives. The National Council has 200 members. Together, the two chambers make up the Swiss Federal Assembly, which meets in Bern.

Maybe you can’t get a pre-roll, sticky weed or blueberry weed strain anywhere in Switzerland, but the possession of 10 grams or less of cannabis isn’t ilegal. Between 200,000 and 300,000 Swiss use cannabis on a regular basis, according to government estimates. Possession of up to 10 grams isn’t punished in most cantons. Public consumption will get you a minor fine, 100 Swiss francs.

Numerous coffee shops are already open, legally selling CBD-dominant cannabis flowers with THC content of less than 1 percent. With the first CBD bars opening, cannabis has become hot news in Switzerland and is becoming part of the streetscape and culture.

CBD use is so widespread, the police in Zurich have started using a rapid test device to test for CBD to distinguish between low-THC legal cannabis and the high-THC illegal flower.

Switzerland’s 1 percent limit on THC means it has a higher threshold than the rest of Europe, Canada, and the United States. Anything up to 1 percent THC is defined as legal fiber hemp under Swiss Federation law. Because Switzerland isn’t a member of the European Union, it is free to set its own marijuana policies.

Back in the late 1990s, cannabis activists in Switzerland discovered a loophole in the Narcotics Act. The legal gap made it possible to grow and sell marijuana, both for personal use and on a larger scale. That’s because the law didn’t yet distinguish between cannabis and hemp on the basis of THC content. As long as the products were grown and sold for the stated use of “aromatherapy,” that made them legal.

A network of “Hanflädelis” (Hemp shops) rapidly sprang up where flowers and hash could be bought at reasonable prices. The shops first appeared in Zurich, and later throughout the country.

The Council of States even approved a legalization law in 2001. The National Council was expected to follow. But Switzerland, despite its famed neutrality (and, at the time, non-membership), came under heavy pressure from the United Nations. The U.N. was still unfortunately locked in is quixotic Drug War mindset. It demanded that Switzerland stick to its commitment to the 1961 Single Convention. That international agreement, seen through by the infamous American drug warrior Harry J. Anslinger, basically forced every country on earth to promise to keep cannabis illegal forever.

It didn’t help that neighbors France and Germany had started to loudly complain about the increasing amounts of cannabis coming across their borders. The weed was coming from, you guessed it, Switzerland

In September 2002, Switzerland joined the United Nations. In short order, the National Council buckled to international pressure. They rejected the law that had been approved by the lower chamber of parliament the year before. Faced with the stark choice of legal cannabis or membership in the U.N., Swiss politicians chose the latter. So now it’s up to the National Council again.

A national referendum on cannabis legalization failed at the polls in 2008. In the decade since, the Swiss cities of Bern, Geneva, Basel, and Zurich have all repeatedly asked for regulated marijuana sales, starting with pilot projects. Many smaller towns also want to take part in such trials.

So in a replay of what happened in 2002 the final decision on cannabis legalization once again is up to the National Council. This time, the Grand Chamber of parliament is expected to at least partially go along with the Council of States. The vote, however, is expected to be a close one.