How The Government Could Use Weed as a Weapon

The plant of peace might just get a militarized make-over. Introducing non-violent, weaponized THC. 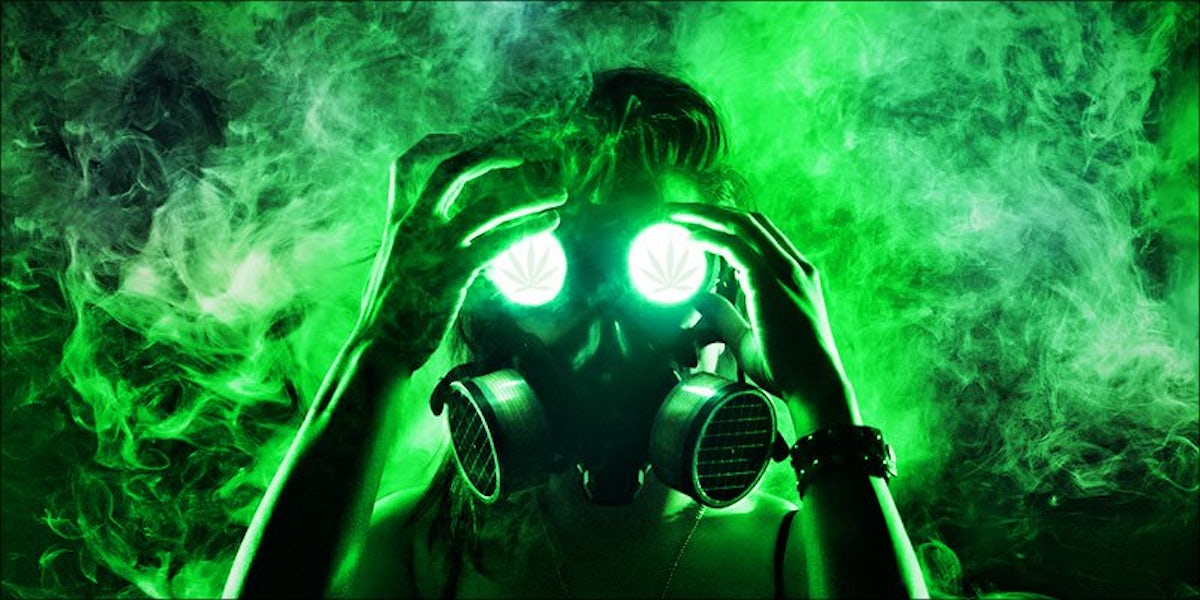 One of the most profound factors in our favor for legalization is that cannabis is non-lethal, even in ridiculously high quantities and concentrations. You might be unable to move because you get so high, but you won’t die. In fact, you won’t have any form of serious long-term after effects at all. Now our greatest talking point might just bite us in the butt. What could possibly make cannabis lovers hate cannabis? How about the government using it as a weapon.

From arresting us for it, to with it

That’s right. Weaponized cannabis. If you’ve been on YouTube lately, you have surely watched videos of people hot boxing rooms with huge amounts of concentrates. Everyone gets really, really high, sits around, and it looks like fun.

But at least one manufacturer thinks that the concept is so nifty, they decided to take mass cannabis use to a new, darker level.

Imagine staging a protest and facing a battalion of riot-gear, violence ready militarized police. Until now, the tried and true methods of crowd control have been either brute force, or lobbing gas filled grenades.

But using chemical warfare on citizens only serves to incense further animosity. But what if crowd control didn’t leave people with burning eyes or battered bodies?

We are safely and effectively putting patent pending experimental cannabinoid sedation agents  – both synthetic and organic – in, on, and “all over” targets and consenting adults.  Yes, they remain alive and well throughout and afterward.

Imagine how much time you could save rolling and sparking. Just walk into a party and say, “Ready to get high? Because this is the BOMB!” Pull the pin, roll it across the floor, and inhale the goodness. The whole party gets higher than a kite in about 60 seconds.

SAINT Brand Cannabis has even gone so far as to put in a patent application for the devices. Here’s a brief excerpt from that document,

Advantageously however, CB1 receptors are absent in the medulla oblongata, the part of the brain stem responsible for autonomic respiratory and cardiovascular function. This is highly advantageous when cannabinoids are used for and as sedative and anesthetic formulations.

Affecting or depressing autonomic respiratory and/or cardiovascular function has long been a limiting disadvantage of known sedative and anesthetic formulations. Fortunately, unless introduced at extremely toxic levels, CB1 agonist cannabinoids primarily leave autonomic respiratory and cardiovascular functions in humans and animals unaffected, due to the lack of CB1 receptors in the brain stem medulla oblongata.

Surprisingly, not a new concept

You might be face-palming right now. Why would they take this wonderful plant and turn it into something perverse?

Well, believe it or not, the idea of controlling the behavior of others with cannabis from a law-enforcement perspective isn’t a new concept.

According to the book Smoke Signals: A Social History of Marijuana by Martin A. Lee, A tribe of Bantus in Africa used cannabis centuries ago as a form of punishment.

Offenders would be forced to inhale the smoke of the plant until they either confessed to a crime or keeled over.

Other publications expand on the ordeal. Tribes that used this form of punishment, most often for thieves or adulterers, would cage the offender in a wooden hut or cage.

Then, a substantial quantity of cannabis would be placed on a fire, and the smoke directed into the enclosure.

Think about the experiences of people who have bitten off more than they can handle with edibles or the feeling of getting far too high when your tolerance is low.

Not deadly, but far from pleasant, right?

Now imagine that everyone you know stands outside the little hut and continues to jeer and shout derision at you as your head swims in THC-induced paranoia… for hours. It’s enough to make you never want to steal again.

So many ways to stone them

The logic behind the step towards a psychochemical application of THC stems from decades of police and military tactics used against crowds, both those that succeeded and those that ride the headlines as horrible failures. The patent application goes on to state,

Known non-lethal or less-than-lethal weapons and techniques include but are not limited to: so-called “Taser” guns, rubber, wax, or plastic bullets, “bean-bag” bullets, airfoil projectiles, tear-gas, mace, pepper-spray, and the like, or other psychochemical warfare agent or method.

Although never developed into an effective weapons system, psychochemical warfare theory and research, along with overlapping mind control drug research, was secretly pursued in the mid-20th century by the U.S. Military and Central Intelligence Agency in the context of the Cold War.

These research programs were ended when they came to light and generated controversy in the 1970s. The degree to which the Soviet Union developed or deployed similar agents during the same period remains largely unknown.

This course of human events during that time hindered cannabis, cannabis-derived, or synthetic-cannabinoids from being developed into safe and effective non-lethal sedatives and non-lethal psychochemical weapons.

In the 1970s, with the U.S. categorizing cannabis as a Schedule 1 Controlled Substance, touting cannabis as an effective and safe sedation or psychochemical warfare agent would have been prohibitive to then public policy and law.

Bold step down a dark path

The implications of this potential patent stand as both myriad and disturbing. Sure, the government would have to modify law to allow such a device to be manufactured. But not in a way that helps John and Mary Jane public.

First, in existing cannabis prosecutions, possession of a weapon dramatically increases the severity of the charges.

If the law deems cannabis itself a weapon, or precursor to a weapon, then it gives the government a whole new way to charge peaceful users: as potential terrorists.

Furthermore, it turns the very image of cannabis from one of peace to one of violence. Forget shotgunning a hit, now you face getting hit from a shotgun equipped with THC.

It looks like cannabis fights more than depression and disease. Prepare for the future. The company’s preliminary catch-phrase?

STONE THEM ALL, and let the courts sort them out.

Does the idea of riot police shooting citizens with THC rounds send chills of foreboding down your spine? Share with us on Facebook, Twitter, or in the comments below.

Get 20% off premium weed and discover the latest products, news, and deals in cannabis.
September 30, 2016 — Last Updated December 19, 2019
Written by Christopher Teague