10 Of The Best Cannabis Moments On The Simpsons

the Simpsons has never failed to provide smiles and laughter, especially in those cannabis moments that find their way into the story line. 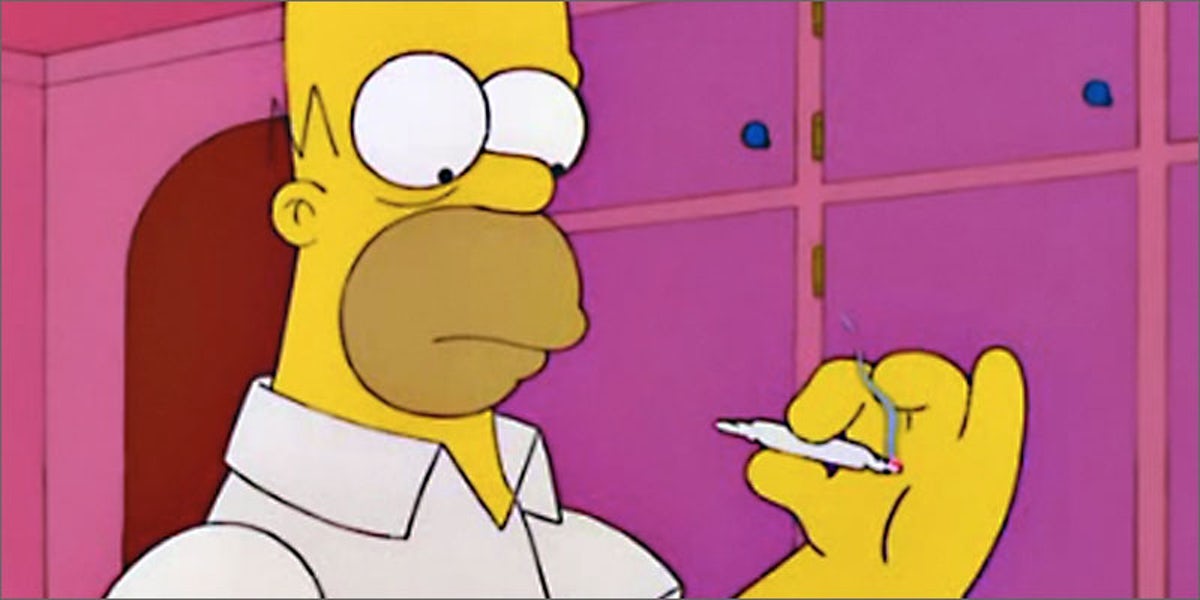 The Simpsons has long been a way for stoners to sit on the couch and enjoy a huge bowl. There is nothing better than getting stoned and sitting down to your favorite adult cartoon and having a proper laugh. Well, the Simpsons has never failed to provide smiles and laughter, especially in those cannabis moments that find their way into the story line.

Matt Groening hasn’t really made much of an attempt to conceal the drug habits of its characters, and that’s why stoners love the Simpsons so much. We have compiled the 10 best cannabis moments on the Simpsons for you to enjoy with a joint or a bong or your favorite way to ingest the world’s favorite intoxicant. Enjoy the controversy that is the Simpsons, and remember to laugh!

One would think that having stoner hippies as parents would result in a raucous, creative child. Apparently not! Ned Flanders parents were as stoned and hippie as they come, but Flanders took a bible bashing road. This video shows Flanders having a fit over Homer blazing one up with his parents. Poor Ned, he could have joined the fun!

In this episode Homer is attacked by a herd of crows, and goes seeking some refuge in Dr Hibbert. He claims that for the fastest pain relief, “the best tonic is chronic”. This episode was aired in 2002, not long into the evolution of medical marijuana, and caused quite some controversy.

Otherwise known as Otto the bus driver, this character is world famous for his smoking habits. He is almost always depicted as being stoned, despite being the one that takes care of a school bus full of Simpson’s characters. And his driving skills are a testament to how intoxicated he is all of the time! His every sentence ends in “dude” or “man”, but the rest of the Simpsons characters seem to appreciate his stoned personality.

Mayor Quimby has somewhat of a tainted reputation in the Simpsons, known as a womaniser and a tax fraud. He is also well known as a pot smoker, and in this episode he is growing a marijuana plant in his closet. Even the Mayor of Springfield seems to enjoy a little bit of the herb.

5. Think about it from “Barthood”

In this episode Bart can smell something coming from Homer and Marge’s bedroom, He catches Homer smoking a bong, and his initial reaction is of paranoia – “what happens if the cops come?” – only to find out that Chief Wiggum is also in the room, sharing a bong with Homer.

Even in Spanish, you’ll understand the general gist of this clip. In the seventh series of the Simpsons, Cypress Hill makes it to Springfield for a concert. Bart and Lisa smell something funny in the air – there’s no doubt what’s going on at a Cypress Hill concert.

8. Cheech and Chong go Up In Smoke

Cheech and Chong even make an appearance in the Simpsons, two of the most well known stoners in history. In this episode, Cheech and Homer blaze one up together, in the absence of Chong who doesn’t have his stoner charm anymore.

In this episode Homer and Lisa go floating in sensory deprivation tanks for the first time. Although they go in completely sober, their experience suggests something psychedelic!

Enjoy the latest and greatest from Herb, enter your email below to get exciting cannabis updates delivered to your inbox.
August 14, 2019
Written by Sera Jane Ghaly