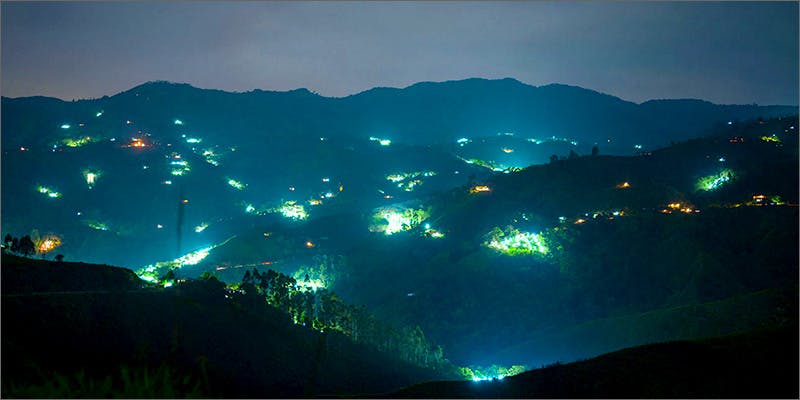 As the war in Colombia has left the hills of the Toribío region an off-limits zone for authorities, the black market fields have expanded, lighting up the night sky.

In Colombia, a 50-year civil war has wracked the region, between the Colombian army and the Revolutionary Armed Forces of Colombia. The lack of infrastructure, transportation, and basic amenities has led to the only money for many local farmers being fields of cannabis. As the war has left the hills of the Toribío region an off-limits zone for authorities, the black market fields have expanded, lighting up the night sky.

While the army and the guerrillas battle in the surrounding regions, the Nasa indigenous people tend the plantations that provide their sustenance. Between the deteriorating roads, markets always ready to shut down amid gunfire, and industrial agriculture dropping the prices of legal crops like coffee and tomatoes, marijuana and coca are the only viable commodities, as the guerrillas provide pick up and payment for the mature crops. With 1,000 plants, a grower can harvest around 60kg (130lbs) of bud, each kilo sells for 25,000 to 30,000 Colombian pesos, ($8 -$10 US dollars).

As the government has not been able to access the region to monitor utilities, the scenes of greenhouses lighting up the night sky with unmetered power is a glaring eye sore to the government.

The problem with peace

The region longs for peace. In an area with only 30,000 people, the war has displaced 8,800 and killed almost 300. Yet with the approach of peace looms the threat of devastation for the local economy, and the lives of most of the natives. In Havana, Cuba, where the peace talks are under way, both sides have already agreed to an ambitious crop-substitution program, as well as the complete eradication of marijuana and coca.

The crux of the dilemma for locals is that in order to receive government assistance, they must first stop growing illegal plants. There is no market to sell legitimate crops in, and with the amount of work the government needs to complete in order for one to spring up, it won’t be happening anytime soon. The first tendrils of order coming to the region have been those of utilities restoring the metering of resources, and with it, the shutoffs for non-payment of the bill that residents have not paid in many years in some instances.

“Instead of sending help and resources, or holding a meeting with experts to get ideas on how to get this town out of the hole its been for the last 40 years, what they do is add more bills,” Robeiro, a 26-year-old marijuana grower

It is for these reasons that peace has been so difficult. Both poor farmers and the guerillas who supply the market for the plants have worked in cases to derail the ceasefire in order to maintain income through the illicit trade. By keeping the war going, the guerillas keep the farmers devoted to the crop, and the farmers are guaranteed a steady income. Government efforts to manually destroy crops have led to clashes with villagers, including fatalities.

With the new agreement reached on both sides, the plan includes a comprehensive package of infrastructure, subsidies, and credits to bring healthcare, education, and vegetable crops. The groups agree to go after large drug smugglers and money launderers instead of simple peasants. Yet the call for eradication is what militarized Colombia in the first place, and the aerial spraying of marijuana crops has impacted the small food crops that households used to sustain themselves in the absence of a market. The biggest question is whether the government has the resources to bring entire regions out of poverty while keeping them from starving.

Do you think that the government can take cannabis from the people, after it has been the sole support for so many? Will the policy lead to prosperity or the poorhouse for the region? Share your thoughts on social media or in the comments below.