Now Reading:learn | Can Marijuana Help You Be More Productive? 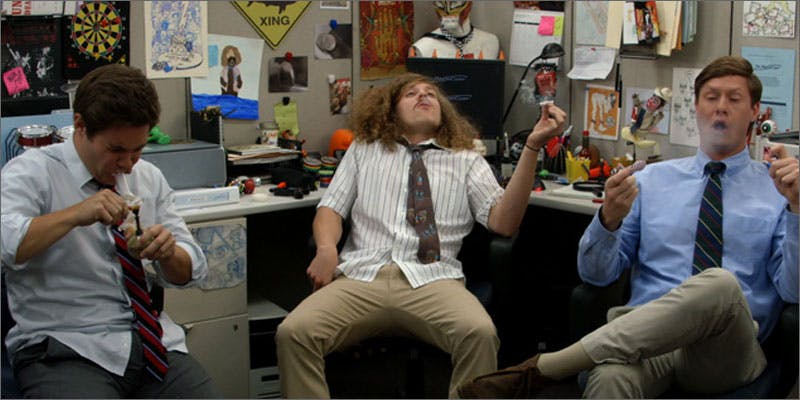 Can Marijuana Help You Be More Productive?

The days of pouring cup after cup of caffeine laden coffee to keep you alert at work may be over. It’s time to let marijuana help you be more productive.

Yes! Marijuana Can Make You More Productive at Work

The days of pouring cup after cup of caffeine laden coffee to keep you alert at work may be coming to an end for some. With increased access to marijuana, Americans are testing their limits – some of us find that consuming marijuana on the job is a key component to productivity. So under what circumstances is using marijuana on the job a good idea?

Not Just an After School Special

For many of us, marijuana use is something we save for after work or school, but as marijuana use becomes widely accepted across the nation, it is no surprise when we hear reports of people using while on the job.

If we look back on American drug use in the workplace, it is hard to forget the scenes from the movie Wolf of Wall Street. Stock brokers running rampant through the office using cocaine as if it was going out of style.

When we talk about drug use in the workplace, this is the image that is often conjured. Let’s not forget that at least 65% of Americans are on a daily dose of some type of prescription drug, designed to keep them productive or happy throughout their day. So in an atmosphere that is already full of drug use, why is the idea of getting high at work so crazy?

The tech industry in America is booming. It’s an industry full of young people that have grown up with some access to marijuana and have adopted use of the drug as part of their daily routine. These are a creative bunch of people who often cite marijuana use as a stimulant for their creativity.

Richard Hatter of Hired Guns Creative, a British Columbia-based design company, uses marijuana on a regular basis when he is working. According to Hatter,

“It helps me focus in,” he says of his process. “It helps me get in the zone and look at different angles. It’s something I use as a tool in my life to get a creative edge.”

Hatter does admit that his job does not require him to make decisions crucial to the finances or operations of his company, leaving him free to be creative with his designs while high.

Similarly, we talked about successful CEO’s who have smoked the herb, and former Zite CEO Mark Johnson described knowing that his staff was constantly smoking weed on the job. Johnson went so far as to describe bowls of marijuana being put around the office for employees to enjoy during the day.

Use of marijuana on the job is not limited to office jobs or the service industry; professional athletes are also among those who believe marijuana use is helpful to their career. Though these athletes do not suggest that getting high before games is a great idea, they feel that medical marijuana is a great alternative to pain medications like OxyContin.

Further, marijuana is a great medicine for athletes to use during periods of recovery. Athletes find that marijuana relaxes them and allows them to focus on productivity in the workplace.

Using marijuana while at work may seem like a good idea to you. However, you must remember that employers maintain the right to create their own rules regarding marijuana use.

So, before you light up in front of your office building make sure you are won’t be fired. You also want to be sure to know yourself – if smoking marijuana often sedates you, think twice before experimenting at work.

Do you think smoking weed at work is a good idea? Let us know on social media.