Many think of CBD as benign, but there actually are many CBD drug interactions. 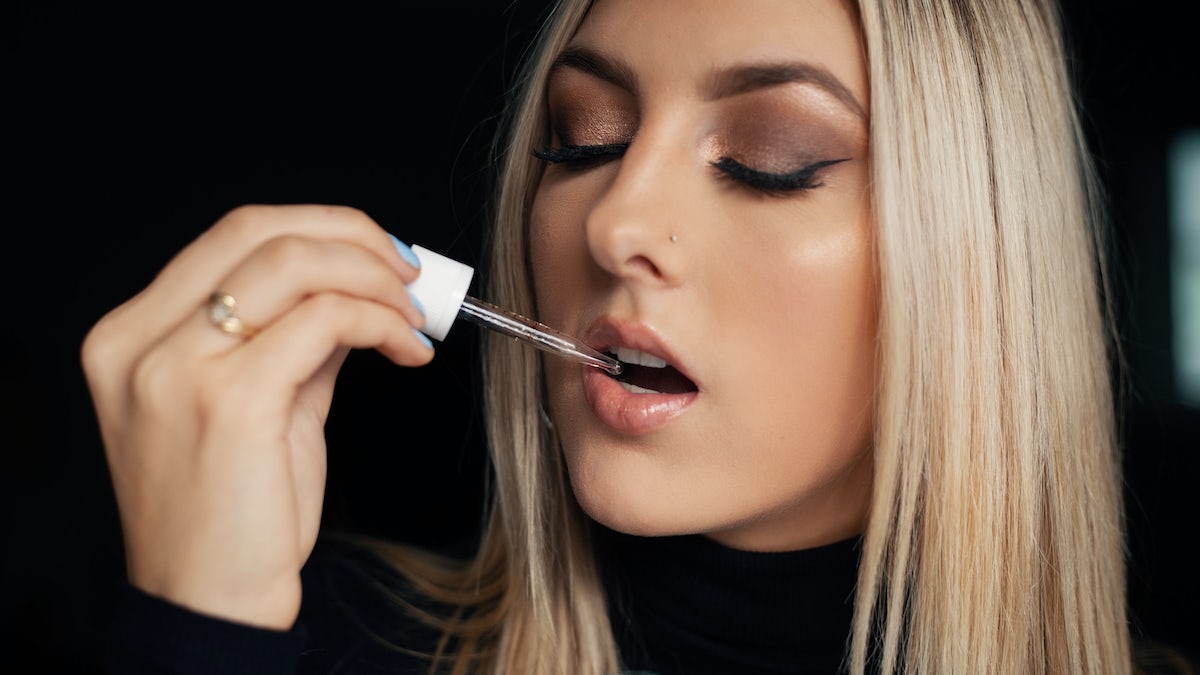 CBD is all the rage, and according to the hype, this non-intoxicating cannabinoid has a ton of medical benefits. People of all ages are using CBD to help with serious medical issues like epilepsy, Parkinson’s, and chemotherapy relief, as well as mental health issues like anxiety, depression, and addiction. Not to mention, CBD as an overall health and wellbeing ingredient is in everything nowadays, from your makeup to your latte promising benefits like relaxation and anti-aging effects. We’re not saying CBD doesn’t work, but if you’ve been taking CBD in one form or another, it’s important to learn how it can interact with other medications.

Can CBD Interfere with Medications?

The short answer is yes. CBD can interfere and interact with other drugs, including prescription and over-the-counter remedies. Dr. Jordan Tishler, MD and President of InhaleMD, medical cannabis doctors in Massachusetts, says: “In practical terms, CBD at therapeutic doses (10 to 20 mg per kilogram) can have harmful interactions with a range of conventional medications like epilepsy drugs, heart medications, anticoagulants, and others.”

So how do you know if your medication is potentially interacting with CBD? According to the new book, Healing with CBD: How Cannabidiol Can Transform Your Health Without the High by Eileen Konieczny, RN, and Lauren Wilson, an easy way to determine if CBD interacts with your medication is if you’re supposed to avoid grapefruit while taking your prescription. The authors explain, “CBD interacts with medications in the same way grapefruit does, only it has much more potent effects. So if the answer is yes, you will know interaction could be an issue for you.”

What’s the deal with grapefruit, you might be asking? It all has to do with how CBD, grapefruit, and more than half our world’s pharmaceutical drugs are metabolized by the liver. Enzymes known as the cytochrome P450 system are responsible for breaking down toxins to be passed through the urine. They also metabolize 60 percent of our pharmaceutical drugs, according to Healing with CBD.

The problem is, when more than one drug uses the cytochrome 450 pathway, they begin to interact with each other. In fact, one can inhibit or exacerbate the metabolism of the other. What that means is, one drug, like CBD, could prevent your prescription medication from working effectively. Plus, the more drugs you add to the equation, the more complex the interactions become, with many medications competing to be metabolized by the same system of enzymes.

CBD has been found to be a potent inhibitor of other drugs using the cytochrome P450 pathway. When taken with competing meds, CBD will fight its way to be metabolized first, forcing less strong prescriptions to wait their turn and often, reducing their effectiveness. That’s how CBD is similar to grapefruit; it too can prevent drugs using the cytochrome 450 pathway from metabolizing.

However, before you panic, it’s important to remember that medical science has been studying these drug interactions for a long time because of how important it is that a patient receives an “effective dose” to treat their condition. One of your doctor’s main jobs when prescribing multiple prescriptions is to pay careful attention to how the meds will interact with each other. Then, they can ensure their patients’ are correctly treated by taking possible drug interactions into consideration and adjusting the dose accordingly.

While we’ve gone into more depth below on specific drug interactions, Healing with CBD has dedicated an entire section of their book to the issue. The authors list the types of drugs that also use the cytochrome P450 enzyme system, and so could potentially be interacting with CBD. These include:

Can CBD Interfere with Antibiotics?

Unfortunately, we don’t have a straight answer for this one. On the one hand, Healing with CBD says, yes, antibiotics also use the cytochrome P450 enzyme, and so there could be a potential interaction. On the other hand, when Herb asked Dr. Tishler, he said he hadn’t “seen any worries about antibiotics.” If you are prescribed antibiotics while taking CBD daily, it is a good idea to tell your doctor so they can prescribe an effective dose.

Does CBD Interact with Chemotherapy?

Interesting, CBD may interact with chemotherapy, but not in the same way CBD interacts with many of the other prescriptions on this list. “It does appear that CBD can interact [with chemo], but seems to so positively rather than negatively,” says Tishler. “Interestingly, there is some data to suggest that CBD, in super high doses, interacts positively with radiation therapy.”

Can CBD Interact with Antidepressants or Anti-anxiety Meds?

There isn’t a clear-cut answer to this question According to Healing with CBD, antidepressants, antipsychotics, and benzodiazepines, like Klonopin, use the cytochrome P450 enzyme, and so, there could be a possible interaction. However, according to Tishler, “[CBD] does not appear to interact with antidepressants or anti-anxiety meds.” So again, it’s important to talk to your doctor or psychiatrist if you are taking these drugs at the same time as CBD.

Does CBD Interact with Blood Thinners?

This is an important one because the answer is yes. Dr. Tishler tells us that “some blood thinners are a problem, specifically Warfarin and Clopidigrel (Plavix).” So if you’re prescribed one of these drugs, you should not be taking CBD daily without consulting your doctor or pharmacist. Dr. Tishler also points out that other blood thinners drugs, like “Heparin and Factor Xa inhibitors,” are safe to combine with CBD.

Does CBD Interact with Ibuprofen?

You’re not going to like our answer to this, but once again, it’s unclear if CBD interacts with ibuprofen. The thing is, according to Healing with CBD, NSAIDS use the cytochrome P450 enzyme system. Yet at the same time, when we asked Dr. Tishler, he said that he had not heard of any interaction between the two. If you take NSAIDs regularly as well as CBD, you should have a conversation with your doctor about potential interactions.

What if you use a prescription topical cream or ointment, is it safe to use a topical CBD product at the same time? According to Dr. Tishler, there shouldn’t be a problem for two reasons. First, “topical meds aren’t really subject to P450 degradation,” he says. Meaning, because you’re applying these to the skin instead of consuming them, they’re not interacting with the same cytochrome 450 pathway in the liver.

However, his second point is even more interesting. Dr. Tishler says, “More to the point, however, there’s no evidence that cannabinoid topicals work at all, at least for non-dermatological problems.”

How to Talk to Your Doctor About CBD

We’ve said it before, but we feel like we need to say it one more time: it’s important to talk to your doctor about taking CBD alongside prescription drugs. When prescribing drugs, your doctor needs to know what supplements you’re on to avoid any harmful interactions or ineffective doses.

“I think it’s important to talk to your care team about all the substances and medications you’re using,” agrees Tishler. “There are many medications that can interact with cannabis, with each other, and with seemingly harmless supplements or other “over the counter” options.  It’s crucial that your treating team know what you’re taking or they won’t be able to take effective and safe care of you.”

While we understand it can be difficult to broach the subject with your doctor for fear of stigma or legality issues, it’s still important. If you absolutely cannot talk to your current physician about cannabis or CBD, find a doctor who is integrating medical cannabis into their practice. In Healing with CBD, the authors recommend a couple of resources for finding a cannabis doctor like the Association of Cannabis Specialists or the Society of Cannabis Clinicians.

CBD is helping people around the world and helping them get off more powerful prescription drugs in the process. But even though CBD is “non-intoxicating” and has very mild to no side effects, it could still be interacting with your other drugs. Be safe and talk to your doctor before starting to take CBD while on prescription drugs.

Enjoy the latest and greatest from Herb, enter your email below to get exciting cannabis updates delivered to your inbox.
January 02, 2019 — Last Updated November 27, 2019
Written by Michelle Janikian