This marijuana testing system will prevent people from being unfairly fired

Finally, a testing system that distinguishes between consumption and impairment. 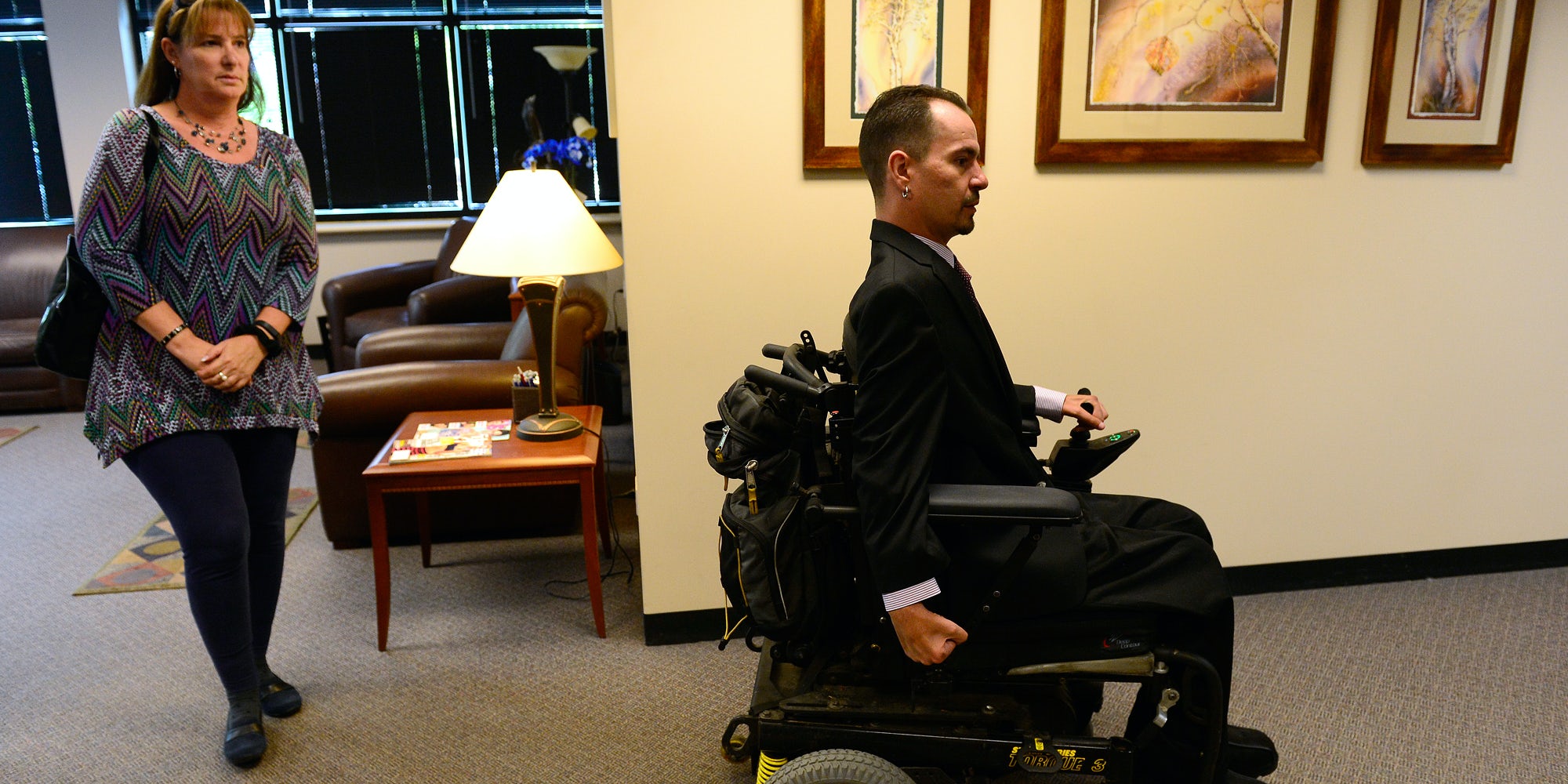 CENTENNIAL, CO – JUNE 15: Brandon Coats arrives at his attorney’s office with his mother, Donna Scharfenberg, left. Brandon Coats, his family, and his attorney, Michael Evans, say they are disappointed in the Colorado Supreme Court ruling that Monday affirmed lower courts’ rulings that businesses can fire employees for the use of marijuana even if it’s for medical use and even if it’s done off-duty. Coats, who is a quadriplegic, was fired from his job at Dish Network in 2010 for testing positive for marijuana in a random company drug test. (Photo by Kathryn Scott Osler/The Denver Post via Getty Images)

Unlike alcohol, tests designed to catch people under the influence of marijuana are notoriously unreliable. Numerous cases of unjust arrests and workplace dismissals based on marijuana impairment have left many regulators scratching their heads for an appropriate testing method. But now, a prominent marijuana advocacy group in Denver believes they’ve found a device that fits the bill—at least when it comes to workplace impairment testing.

On February 21st, Denver’s National Organization for the Reform of Marijuana Laws (NORML) participated in a lobbying event at the Colorado State Capital where they advocated for the implementation of this device, called AlertMeter, in the workplace.

AlertMeter is unique in that it doesn’t test for levels of marijuana in your bloodstream. Instead, AlertMeter simply tests your level of cognitive impairment with a series of puzzles you’re asked to complete within a certain timeframe.

This is why NORML supports the implementation of the AlertMeter in workplaces. Denver NORML’s executive director, Jordan Person, says that this would prevent people from “[being] fired on a Wednesday for performing a legal activity on a Saturday.”

The AlertMeter is a square, tablet-shaped screen on which employees are asked to complete these short series of puzzles before clocking into their shifts. If the worker fails their first set of puzzles, they are given one more try before the machine automatically contacts a supervisor. But the AlertMeter isn’t only directed at people who’ve consumed drugs like marijuana before work. If an employee is not in good shape to work due to other, non-drug related reasons (for example, if they’re too sleep deprived), AlertMeter will similarly signal their lack of capacity to safely perform their work duties that day.

“Why is it okay for someone who is up with their sick child all night long, or with their sick husband, or their dying mother, to try to go to work the next day, knowing they shouldn’t go to work, but they do anyway because they don’t want to lose their job?” Person tells Herb.

The AlertMeter’s greatest potential application exists in companies where employees are asked to operate heavy machinery, such as the Colorado-based manufacturing company Vforge, which claims that the AlertMeter has helped to decrease the number of workers compensation claims filed against the company by 70% in the last two years.”

The AlertMeter also helps to distinguish between consumption and impairment, which may prove to be essential for medical cannabis patients who use medical marijuana during work hours to treat certain conditions. As Carol Setters, the vice president of AlertMeter’s parent company, tells Westword, while testing the device on a group of people who had all smoked the same size joint, some were able to pass the test while others weren’t. This type of distinction is closer to the leeway that is afforded to alcohol, where above a certain age, motorists are permitted to drink a limited number of alcoholic beverages before driving. The AlertMeter allows for a similar level of regulation, which many believe is more equitable than, for example, a urinary dipstick test. (Last year in Canada, one judge even let a motorist off—even though he had admitted to driving high—ruling that while the motorist was high, she was not satisfied that he was impaired.)

“We support the employers right to know whether or not their staff is impaired.” Says Person. “But testing someone for traces of metabolites for a substance that in some people could be in their system for up to 50 days, as per the most recent Mayo Clinic results, is antiquated! So we are suggesting a different solution.”

Get 20% off premium weed and discover the latest products, news, and deals in cannabis.
March 02, 2018 — Last Updated
Written by Rob Hoffman