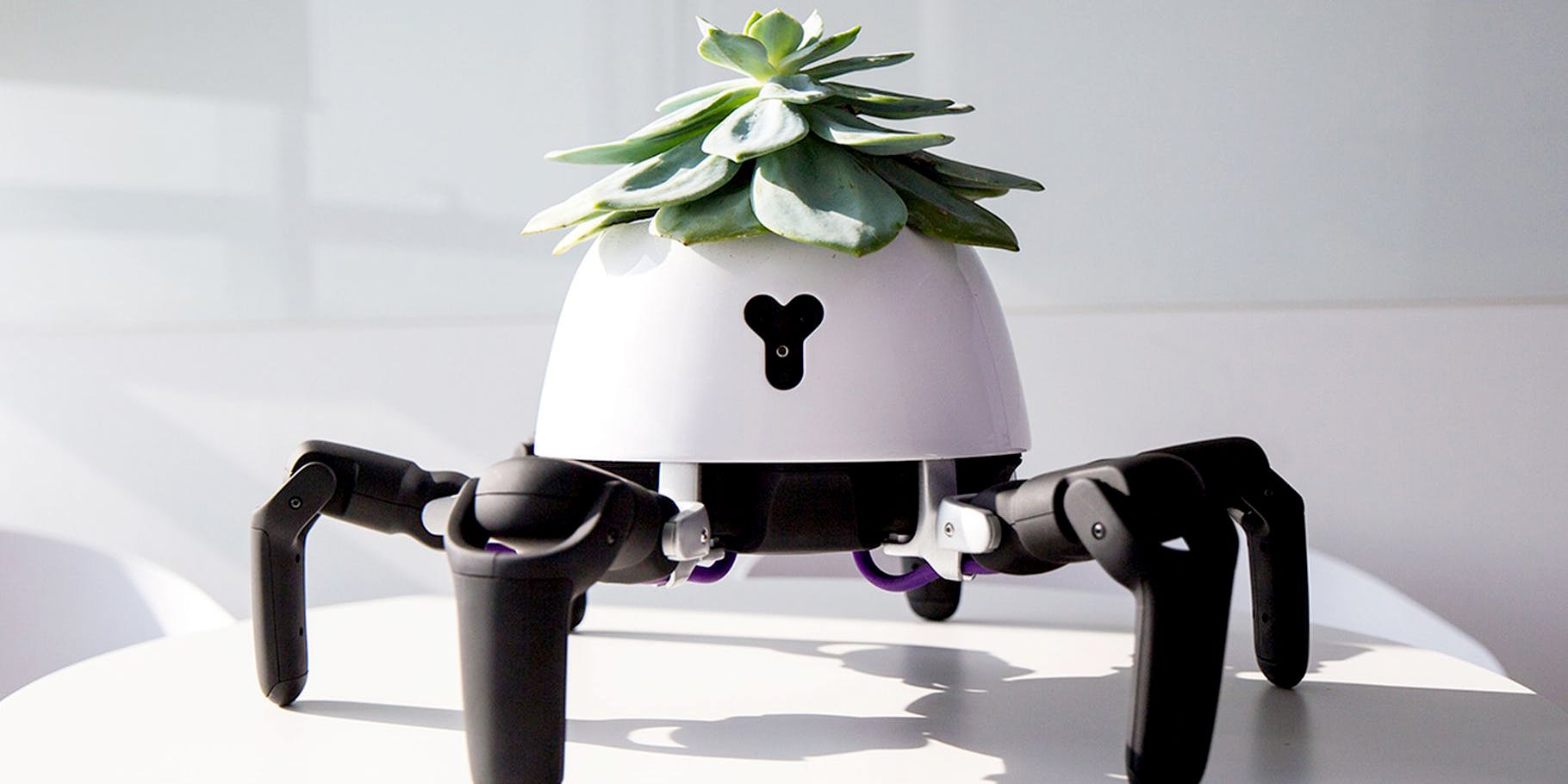 No need for expensive lighting. This robot moves plants towards the light.

Would you buy a tiny six-legged robot that moves your plant in and out of the sun, doing a cute little dance to let you know when it needs more water? If the answer is ‘yes,’ you’re in luck.

This is now a possibility, thanks to the work of Tianqi Sun, whose Vincross company makes Hexa, the robot in question. Hexa is a user-friendly, programmable robot intended to make robotics “accessible to the many, not the few.” Sun recently modded one of his Hexa robots to become a very, very fancy mobile flowerpot, The Verge reported, as part of a project he’s dubbed “Sharing Human Technology with Plants.”

Equipped with onboard sensors and some clever programming, the robot can:

Seek sun when it needs it.

Find shade when it doesn’t.

Do a happy dance when it’s happy.

Or a less happy dance when it’s thirsty.

Technology is wild, right? It’s not clear what sensors Sun is using to help the plant figure out when it needs sun or shade, but the base Hexa model comes equipped with a 720p camera, an infrared beam, and a distance sensor, allowing it to navigate around pretty independently. We’re not sure what it would take to turn a stock Hexa into a plant-bearing bot, but the robot’s “Mind” platform seems pretty open-ended. The company’s website definitely encourages its customers to indulge their creativity, saying, “Make something cool.”

Also, as it turns out, the original plant bot is actually what got Sun his initial investment in Vincross, when it attracted the attention of angel investor Bob Xu. He’d created it as an installation project back in 2014, before the standard Hexa was even a concept drawing. “It’s no exaggeration to say that without ‘Sharing Human Technology with Plants,’ we wouldn’t have been able to create HEXA so quickly,” he wrote in a blog post.

The story of how that original installation came about is every bit as trippy as the dancing robot plant itself, of course. Sun went to see a sunflower show back in 2014, where he was captivated by a single dead flower that had, it seemed, simply been unlucky enough to be planted in a sunless portion of the plot.

“I thought, if it could move a little bit, take a 30-feet walk out of the shadow to where the other sunflowers were, it would have lived healthily,” he wrote. “But it didn’t.” Starts to make a lot more sense why he wanted to put a plant on a crawling robot, doesn’t it? Sun is clearly quite passionate about plants and has some very interesting philosophical ideas about them.

“Plants are passive,” his post continued. “Eternally, inexplicably passive. No matter if they are being cut, bitten, burned or pulled from the earth, or when they lack sunshine, water, or are too hot or cold, they will hold still and take whatever is happening to them. They have the fewest degrees of freedom among all the creatures in nature. This is simply the default setting that nature gives to plants.”

Humans, he argues, have managed to change their default settings via space travel, deep sea submarines, and other technological advancements. Why can’t plants do the same, he figures? When it comes to whether plants even have the agency to want to move around, Sun admits that, “I do not know the answer, but I would love to try to share some of this human tendency and technology with plants.” He doesn’t quite say that plants have feelings but there are certainly others out there who do.

People have already begun speculating about what you could do with this very advanced flowerpot—”Imagine robot planters the size of small bears, lumbering slowly around gardens and parks, looking for a place to sun themselves”—The Verge’s James Vincent wrote—but no one has brought up one very obvious use: light deprivation for cannabis.

The cannabis flowering cycle is light-dependent, with plants only flowering when they’re exposed to about 12 hours of sunlight and 12 hours of darkness. To get two harvests where the natural world would only allow one, growers often cover mature plants for a portion of the long summer days, tricking them into growing big, resiny buds. And while there are already greenhouses with built-in shades that run on a timer, would the world not be a way cooler place with a bunch of pot plants running around on six legs, hiding from the sun and wiggling around when they want water?