How Does Smoking Weed Before Bed Affect You?

Smoking weed before bed might help you sleep, but what else can it do to your body? 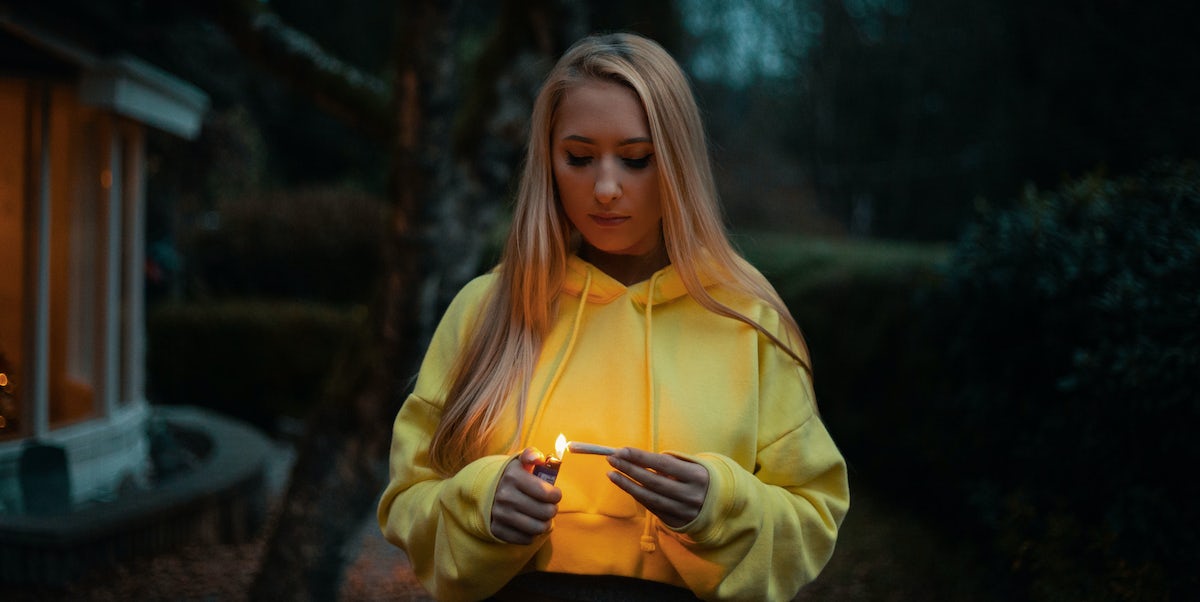 The use of cannabis for sleep is making waves in and outside of legal states. Why, you ask? Because trouble sleeping is one of the most common afflictions of our modern age. In fact, according to the American Sleep Association, 50 to 70 million Americans suffer from a sleep disorder. What’s more, about 10 percent of adults in the U.S. have chronic insomnia. So, how can smoking weed before bed help?

Smoking Weed Before Bed: Does Cannabis Make you Sleepy?

There’s plenty of anecdotal evidence suggesting smoking weed before bed can you help you sleep, but does cannabis really help you nod off? The answer isn’t straightforward. For starters, it depends on what strain you’re consuming. Indicas are often high in the terpene myrcene, which is a relaxant that makes people tired, making them better for the task than an energizing Sativa.

While THC and CBD are the most commonly discussed cannabinoids, you may be overlooking an important third cannabinoid: CBN. CBN is thought to be the most sedative of all the cannabinoids. In fact, studies dating back to 1995 have found CBN to prolong sleep as well as have anti-seizure properties. Yet, how CBN is formed is it’s most unique quality. CBN is found in cannabis that has been aged over a long period of time because it is actually a product of degraded THC.

While CBN is an effective sleep aid, it’s not to say you should disregard the “big two” cannabinoids. THC can also help people sleep, as can CBD, in higher doses. And even more crucial is finding the correct ratios of CBD, THC and CBN for your individual needs. Be careful with CBD however, as many people report CBD in small doses actually helps to keep them awake and focused.

There are also some relaxing and sleep-inducing terpenes to look for when buying cannabis for sleep as well. Look for strains high in myrcene, a terpene with known sedative effects. Also look for terpinolene and phytol, which are known to relax the body and offer pain relieving effects, respectively.

These are just a few of our recommendations for great strains of cannabis for sleep:

Sleeping While High: Are There Any Benefits?

Sleeping while high does have some benefits. For one, according to this study 2013, cannabis can help you fall asleep faster. So if you suffer from insomnia or have trouble winding down at night, smoking weed before bed will probably help.

Cannabis can also help you sleep by relieving many of the symptoms that keep people awake at night, including stress, anxiety, and pain. These symptoms are often exacerbated by the lack of sleep, creating a negative feedback loop of sleeplessness. In fact, back pain is one of the leading causes cited by adults who have trouble falling and staying asleep. That’s where cannabis comes in: it both reduces symptoms and makes users tired – breaking the cycle and allowing you to catch some quality Zzz’s.

The only caveat, as sleep psychologist Deirdre Conroy points out in an article for The Conversation points out, is that cannabis for sleep really depends on the individual. She says, in her experience treating hundreds of people with insomnia, cannabis for sleep can definitely help those struggling with depression and anxiety. When it comes to other conditions, she’s less than sure.

What’s more, sleep experts aren’t even positive of the role in REM sleep in regards to health. While there are many theories, the main one being that REM sleep helps people to organize thoughts and activities of the day and to help plan for the future, nothing’s been proven definitively. Meaning, even if cannabis does lower REM sleep, it might not even be detrimental.

There’s one more way weed and dreams are related. If you consume cannabis regularly, you probably don’t remember many of your dreams when you wake up. But if you consume regularly and then stop cold turkey, have you ever noticed how your dreams seem to go crazy? Well, that also has to do with the effect on your REM sleep.

Some experts attribute these weird dreams to the REM “rebound effect.” Sleep expert and neurologist, Dr. Hans Hamburger told Vice, “If you’ve been taking a drug that suppresses a certain phenomenon for a while, then that phenomenon will come back stronger when you stop using that drug.”  Basically, because your REM cycle is allowed to return thanks to your cannabis cessation, it overcompensates and comes back in full force at first.

Cannabis Before Bed for PTSD

However, because of REM sleep’s role in dreams, it can actually be beneficial to those with post-traumatic stress disorder, or PTSD. In fact, a 2008 study found cannabis to help those with PTSD sleep. PTSD can cause horrifying nightmares that can either keep people awake or make them want to avoid sleep altogether. As mentioned above, because cannabis is rich in THC, it reduces the amount of REM sleep you get. For those with PTSD, that can mean fewer nightmares, and therefore better rest.

Smoking and vaping cannabis will provide the most immediate effect, there are plenty of other options for those looking to use cannabis for sleep. Many people are turning to cannabis oils and tinctures before bed, as well as edibles and topicals.

Cannabis edibles can help you stay asleep and sleep for longer because they take longer to digest. Unlike inhaled cannabis that kicks in almost immediately, it takes about two hours for cannabis to be digested by the liver and enter the blood. But once it does, you feel the effects of cannabis for much longer, often up to eight hours. Therefore, edibles can be great to help people fall and stay asleep. The trick is to eat an edible two to three hours before your bedtime for the maximum effect.

Cannabis teas and other drinkables are also great for before bed because they kick in faster than traditional edibles. There are also some cannabis topical products meant to relax your whole body that are great for unwinding before hitting the sack, like cannabis bath bombs. Whichever method you choose, cannabis before bed is definitely helping people unwind and hit the sack easier than ever.

Enjoy the latest and greatest from Herb, enter your email below to get exciting cannabis updates delivered to your inbox.
February 13, 2019 — Last Updated December 17, 2019
Written by Michelle Janikian