One man chose CBD for ADHD instead of pharmaceuticals. 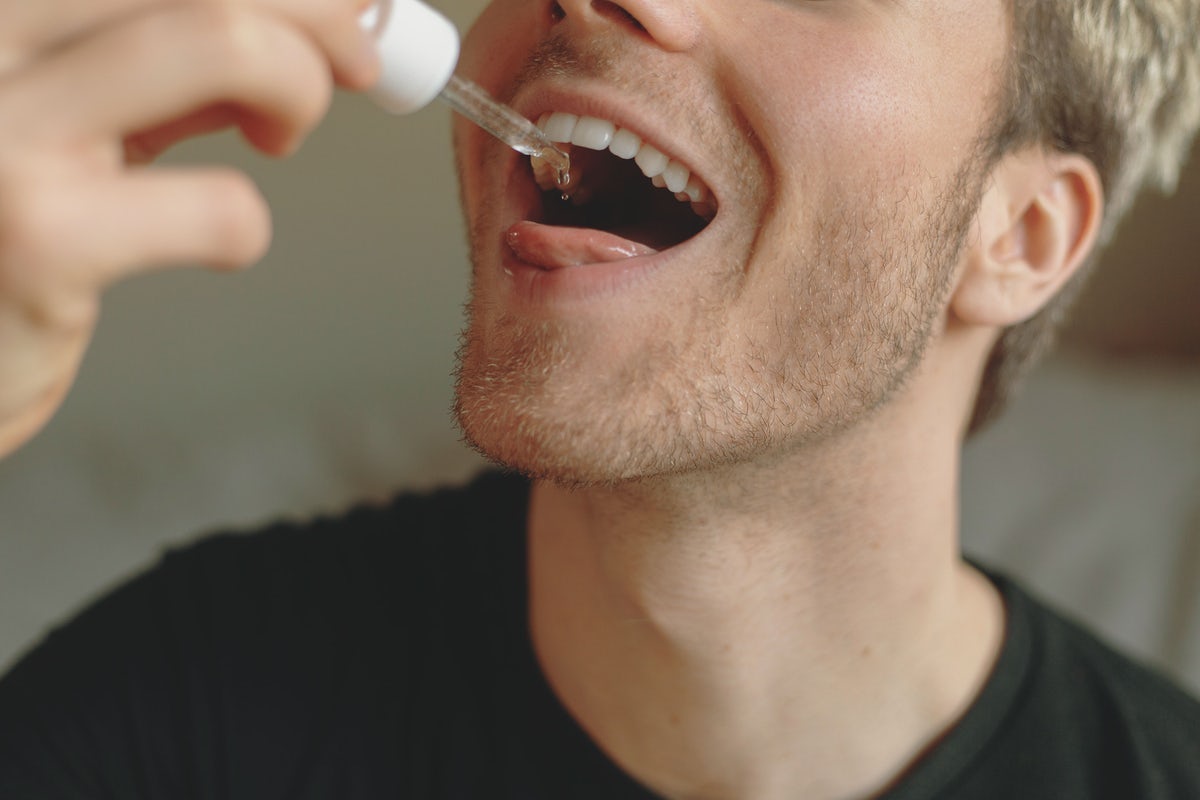 Tyler Hurst didn’t have any friends in college. His ADHD caused him to be impulsive, way over-stimulated, and affected his ability to have conversations with people. He needed his peers to speed up to catch up to him, and he was always anxious about stuttering or stammering because he could think and type faster than he could talk.

“I was always ahead of the conversation, behind it, or to the side, never in sync with whatever was going on,” Hurst explains. “I was having trouble relating to people in general because my mind works in a different way and people were just confused and annoyed by me.”

At the time, he was diagnosed with Bipolar Disorder instead of ADHD. He was given Lithium and popular antidepressant drugs, like Prozac, but they didn’t do much for his symptoms. It wasn’t until he graduated college and went to a new psychiatrist that he learned he had an attention problem, not manic depression, and started taking Ritalin for ADHD.

Before taking stimulants, Hurst describes his ADHD as giving him “brain fog.” He’s a writer and so much of his self-worth revolves around his new ideas and producing work. But he only had “fuzzy versions” of those ideas, which Hurst explains was really frustrating, until stimulants made them clearer. “The second I got on ADHD medication my outlook improved tremendously,” he says.

Dr. Edward Hallowell, ADHD expert and NY Times bestselling author says “stimulant medication is the best [for ADHD]” and this is a popular opinion among doctors. In fact, 50 million stimulant prescriptions were written in 2011 in the U.S. alone.

Hallowell also tells Herb that people with ADHD struggle in many ways. “Prisons are full of people with undiagnosed ADD,” he says. He explains it’s because folks with ADHD can struggle with impulsivity, reckless, and addictive behaviors. “At worst, it can be living hell having ADHD,” says Hallowell.

Adult ADHD can also affect relationships and a person’s ability to hold down a job, which became Hurst’s problem when he wanted to stop the stimulant medication.

Stimulants like Ritalin, which is methylphenidate, and Adderall, which is amphetamine, help those with ADD/ADHD to “slow down” and focus. But they also come with a slew of side effects. Hallowell says the most common side effect is decreased appetite. Elevated heart rate and blood pressure are also common, as are headaches, tremor, and insomnia. “Those are all controllable by simply stopping the medication,” says Hallowell.

But for Hurst, Ritalin, and Adderall affected him more seriously, mainly by causing him a lot of anxiety. He says he constantly had a “low-level anxiety” for the years he was on prescription stimulants, especially physical symptoms like sweatiness, but he didn’t fully realize it.

Sleep was hard to come by during those years. Although the Adderall would wear off around five o’clock in the afternoon, Hurst would consume caffeinated drinks throughout the day that would keep him up at night. Then, he had to either drink himself to sleep, take over-the-counter sleeping pills like Tylenol PM, or exercise so hard he passed out. But he couldn’t simply shut down naturally and fall asleep, and he rarely got a full night’s rest – not helping his erratic mood and behavior.

Hurst wanted to stop taking Adderall and tried non-stimulant drug options for attention, like Strattera. However, it made him incredibly depressed and he often thought about suicide. On Strattera, he would fantasize about where he could go to kill himself so that no one would have to see his body. “I thought it was normal,” says Hurst. “I didn’t know.”

Eventually, Hurst was prescribed a combination of Adderall and Lexapro, an anti-depressant. But after six years on prescription stimulants, he had enough of their side effects and stopped taking them completely.

Taking Lexapro and massive amounts of caffeine daily, his work and relationships suffered. He says he was impulsive, short with people, and irritable. He also had “no filter” as he describes it, and would be too honest with colleagues to the point that it hurt the magazine he was an editor for at the time.

Eventually, that magazine went under, a major regret of Hurst’s. “My mistakes are part of why it dissolved,” he says. He then bounced around jobs, but his ADHD got in the way of him keeping anything stable. He had trouble sitting at his desk and paying attention at meetings; he would miss phone calls and would stress the people around him out. Off the ADHD meds, Hurst was eventually without steady employment for two years. He needed a change.

Hurst began smoking cannabis recreationally in the evenings in the midst of his struggle to properly medicate his ADHD. It made him feel good, he says, and calmed his anxiety, both physical and mental. He also noticed he could get a ton of work done; when his partner would go to sleep, he could get nine hours of work done in three.

He moved to Portland, Oregon around this time and became a medical cannabis patient to experiment with different strains and products. Hurst also began using cannabis during the day for ADHD, but found high THC strains affected his short term memory too much for him to concentrate and be very productive.

When Hurst began experimenting with high CBD strains, things began to click. Although he admits, it was a trial and error process. “I smoked CBD and I noticed I felt calm and able to do stuff as opposed to high THC strains when I also felt calmer, but had a few delusions, at times,” says Hurst.

He explains that CBD calms his mind and his body; that often his anxiety and ADHD manifests itself physically, making his hands and feet sweaty and making him hyper-aware of his surroundings. For example, if a leaf blower is going on outside, he can’t tune it out and focus on whatever he’s doing. “So what the CBD did was make those things less of a big deal. I still notice them but I don’t freak out about them,” describes Hurst.

“Because my resting state is essentially a state of agitation because that’s what ADHD is, a state of agitation, or hyper-awareness, finding ways to turn that off is really, really hard without substituting it with something else,” says Hurst. “CBD just made me better able to deal with the world and my mind as it is right now instead of worrying about what it could be or should have been. So essentially it really helped me stay in the moment of whatever I was doing without stimulation.”

CBD for ADHD: The Science

After a couple months of smoking high-CBD flower, Hurst stopped taking Lexapro and starting medicating completely with cannabis. He was using different medical cannabis products, and says he particularly liked an oil that was around 5:1 or 6:1 CBD to THC.

Hurst isn’t the only person with ADHD using cannabis and CBD for ADHD. A 2017 study found the cannabis extract to significantly improve hyperactivity and impulsivity. It also “indicated” improvement in inattention, cognitive performance, and emotional lability, causing researchers to conclude: “ADHD may represent a subgroup of individuals that gain cognitive enhancement and reduction of ADHD symptoms from the use of cannabinoids.”

Dr. David Bearman, a leading medical researcher in the cannabis space and author of the new book Cannabis Medicine: A Guide to the Practice of Cannabinoid Medicine, tells Herb that the endocannabinoid system helps people with ADD and ADHD by “modulating the speed of neurotransmission.”

Basically, cannabis “kicks out” dopamine from their binding sites, Bearman explains, and replaces it with cannabinoids. This causes slower moving neural impulses, “which means you have basically less competition between concepts and ideas and other kinds of neural inputs in each of the frontal lobes,” says Bearman.

Neurologically speaking, stimulants act on dopamine in the brain in a similar way. Although it interacts with the binding site differently, the result is similar: stimulants also cause “slower moving neural impulses going to the brain,” Bearman explains.

About a year ago, Hurst found a source of hemp-derived CBD oil that he trusted, and it’s been his primary ADHD medication ever since. He takes 5 to 10 mg of hemp-CBD two to three times a day, in the morning, afternoon, and night. Eating hemp caviar on the go and vaping low-THC flower with added CBD isolate is also part of his routine. “Low THC is key,” Hurst says.

Bearman agrees with Hurst, that including THC into a routine for ADD/ADHD – or any medical ailment – will provide more relief than CBD alone.

Bearman suggests taking 2.5 to 5 mg of THC along with 2.5 to 5 mg of CBD two to three times a day for ADHD. “Possibly double the amount of CBD if you want,” says Bearman. He also explains that everyone’s endocannabinoid system is different, so there’s no “one size fits all,” but a 1:1 CBD:THC oil would be a good place to start.

CBD for ADHD Can Heal

Now that Hurst found something that works for his ADHD, he says his plans are to “be the person I was supposed to be before my anxiety stopped it.” He recently started writing again, hosts a cannabis-centric podcast called The Burning Bush, and also became a certified yoga instructor. His goal now is to start a plant-based trauma recovery class or retreat that will incorporate movement, cannabis, and maybe even psilocybin and ayahuasca, to help people overcome trauma and get their lives back.

“Because you can’t really teach people what’s wrong with them,” says Hurst, “you can only give them the resources to figure it out for themselves.”

August 21, 2019 — Last Updated October 12, 2020
Written by Michelle Janikian
Save for later
Start saving articles by clicking the heart icon and you'll find them again in your profile page.

Get 20% off premium weed and discover the latest products, news, and deals in cannabis.
August 21, 2019 — Last Updated October 12, 2020
Written by Michelle Janikian