Here's everything you need to know about the different cannabis extracts available today. Created with 48North. 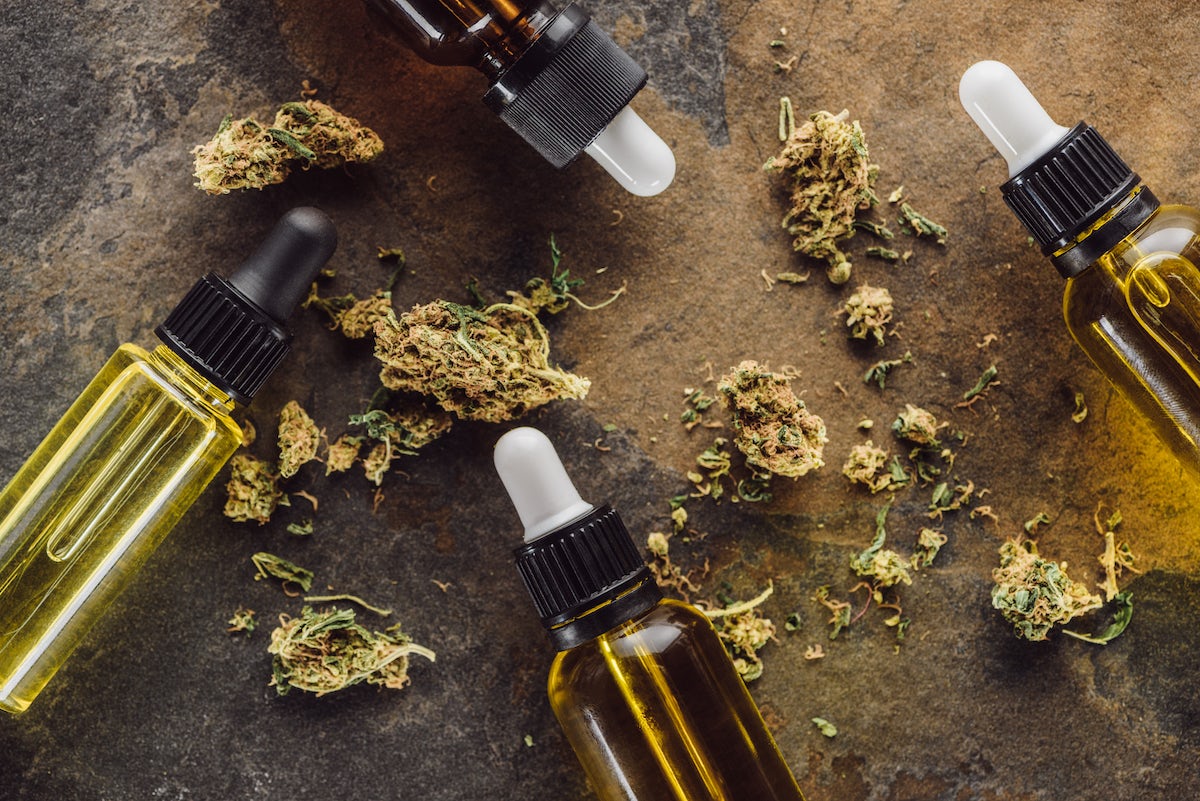 In today’s world, there are more ways to consume cannabis than ever before. The foundation of most of these novel methods of consumption is the cannabis extract—that viscous amber liquid that looks so enticing pooled up inside your vape cartridge. When purchasing cannabis products, just like when looking for a house, a strong foundation is of paramount importance. Your vape cart or tincture is only as good as the concentrate or extract used as the base. Terms like distillate and full-spectrum are often used to describe these extracts, but what do they really mean, and how do I know which one is the best for me? This guide will answer all those questions and help you to make better-informed decisions at the dispensary.

How are Cannabis Concentrates Made?

To get the beneficial effects of cannabis into vape pens, topicals, and edibles, we need to convert the plant into oils where we extract all of its cannabinoids, which are produced abundantly in the resin glands, or trichomes, of the flower. Those oils from the resin glands have to be separated from the plant waxes and any other non-useful vegetative matter. That process can be done with either solvent or mechanical methods. The first one uses products such as butane or ethanol to extract the necessary compounds. In contrast, mechanical processes rely only on changes in temperature and pressure to obtain the plant’s desired compounds. Regardless of the mechanism, the resulting concentrate will have purity and levels much higher than the original flower in terms of all of its naturally occurring components: terpenes, flavonoids, essential oils, and of course, cannabinoids.

This is a term that was coined in 1988 by Raphael Mechoulam, the same guy who discovered THC, and it is a theory that states that cannabinoids have a more favorable action when they are delivered alongside other natural components of cannabis, referring to terpenes, flavonoids, and other cannabinoids. In other words, the effects of cannabis consumption have to do more with the wholeness of the product than with the sum of its individual components. Think about it like this: getting stoned with good friends will feel different than being high in a room full of strangers. Cannabinoids and terpenes work similarly, complementing, and regulating your experience. When they do, it’s called the entourage effect.

This first product type is the most natural of all the cannabis concentrates. Full-spectrum cannabis extracts stand out from the rest because they go through more gentle extraction processes, resulting in a concentrate that has the maximum amount of naturally occurring components of the flower, in addition to cannabinoids. This means that it will contain every bit of the terpenes, flavonoids, and essential oils that are native to the plant. True full-spectrum concentrates are rare because terpenes and flavonoids are highly volatile and can get lost if the extraction process is not appropriate.

The Avitas Super Citrus Haze vape cartridges are a great example of a genuine full-spectrum concentrate made from gently extracted oils that has all the delicious tastes and smells found in the 48North cannabis from which it is derived. These compounds do more than just provide those mouth-watering aromas associated with cannabis. Many of the terpenes that make up that unmistakable odor have been shown to have therapeutic properties that can be instrumental in treating a myriad of different ailments. For example, the terpene beta-caryophyllene that’s found in foods like black pepper and oregano has been shown to be potentially useful in relieving certain gastrointestinal distresses. Making it perfect for after a heavy meal.

CBD and THC may be the most well known of the cannabinoids, but they are far from the only ones. In fact, at least 113 different cannabinoids can be found in the cannabis plant—all of which interact with the body’s endocannabinoid system in unique ways. By leaving these cannabinoids in the final product, full-spectrum extracts offer a more complete and more natural cannabis experience, as well as encourage the entourage effect.

Another type of extract you will encounter in your search for the perfect cannabis product is distillates, which are made through a completely opposite approach to full-spectrum products. The basic idea is to remove everything except for the desired component or cannabinoid. While the process of making distillates requires further refinement than full-spectrum extraction, the final product often may contain some of the naturally occurring cannabinoids, terpenes, and flavonoids that are removed, in addition to the CBD or THC. The process is called fractional distillation, where the plant material is broken up into its individual compounds. Then the desired compounds are re-introduced to the final product while the undesired ones are simply eliminated. These types of distillates are also referred to as broad-spectrum.

Distillates or broad-spectrum cannabis products can be found both in CBD and THC forms. 48North’s Trail Mix is a perfect example of how distillates are made to target different types of consumers and are designed for specific activities and times of the day. This line of outdoor, sun-grown cannabis, grown without the use of pesticides, has been distilled into THC distillate and comes in PAX pods and all-in-one vape pens. The product line-up consists of two intent-based strains. Daytrip Eclipse, which is a Sativa dominant strain with uplifting and energizing effects, is perfect for daytime use and has between 70 and 80% of THC and less than 1% of CBD. On the other hand, the Moonlight Shadow offers an Indica strain with THC levels between 70 and 80% and CBD levels below 1%, ideal for nighttime use.

Another common type of concentrates on the market is isolate. As you might have been able to guess by the name, isolate is a type of extract where a single cannabinoid is isolated by stripping away all the other compounds during the extraction process. What’s left is an extremely potent concentration of that individual cannabinoid, which is usually CBD or THC, but none of the terpenes, flavonoids, or other potentially therapeutic compounds. While isolate is usually the purest and highest potency form of a given cannabinoid, that doesn’t necessarily translate to better. Think about alcohol, just because a particular spirit has a high abv, that doesn’t mean it is a high-quality liquor. If it did, Everclear would be a lot more expensive than it is. The same principle applies with cannabis extracts.

Isolates do have their place, however. Because of the high purity, and lack of any terpenes, isolate has no smell or taste, which can make it very versatile for use in edibles or artificially flavored tinctures. It also provides a solution to consumers who want to make sure they are only consuming a specific cannabinoid, (for example: someone who wants the benefits of CBD, but does not want even a negligible presence of any psychoactive THC) or those who don’t like the natural hempy flavors of other extracts.

Which One Should I Choose?

At first glance, full-spectrum sounds better because it is a complete product in terms of cannabinoids, terpenes, flavonoids, and other essential oils. It also offers the benefits of the Entourage Effect. But, even though the experience may sound better, it is still unknown how you will react because every batch is different. Here’s where distillates become more appealing. Distillates offer consistency and standardization, the user can expect the same effects every single time. Besides, they can be made with unique flavorings or aromas that make them stand out. Distillates are better for commercial purposes, while full-spectrum is more of an overall wellness enhancer.

educationFAQlearn
July 27, 2020 — Last Updated October 13, 2020
Written by Vinnie Sarrocco
Save for later
Start saving articles by clicking the heart icon and you'll find them again in your profile page.

Enjoy the latest and greatest from Herb, enter your email below to get exciting cannabis updates delivered to your inbox.
July 27, 2020 — Last Updated October 13, 2020
Written by Vinnie Sarrocco

We review this Yocan device that is a great option for affordable on-the-go dabbing.

Have you ever grown a landrace or heirloom strain? These ten rarities are difficult to grow, but well worth the effort - if you're…