The relationship between the LGBTQIA+ community and the cannabis community goes deeper than you would imagine. Find out what people and events have brought them together. Created with Kush Queen. 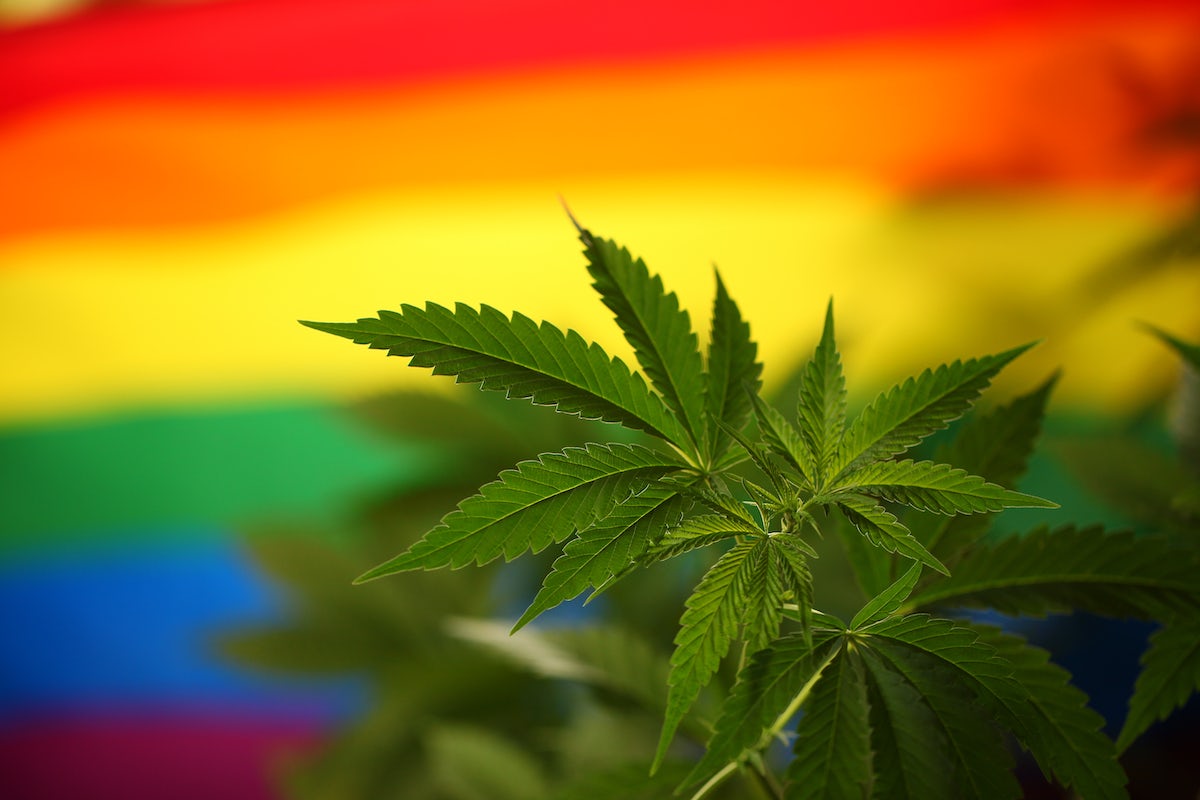 The legal cannabis industry and the LGBTQIA+ community seem to be tight-knit, with brands like Kush Queen, a wellness-centered retailer of CBD products who is now offering a collection of products to coincide Pride, outwardly demonstrating their support for queer activism. Is this just a new trend, or is there a historical precedent of cannabis culture intersecting with LGBTQIA+?

On the surface, the connection between the queer and the cannabis communities may not be immediately obvious. However, if we really stop and think about it, these two cultures are not only surprisingly similar, but actually intrinsically linked.

Well, maybe not all that surprising to the actual members of the LGBTQIA+ community. Anecdotally, gays love cannabis. Spend a night bouncing between west coast gay bars and you’ll see exactly what I mean. But the intersection of queers and cannabis goes deeper than just that. As recently as the 2000’s, both cultures were incredibly fringe. Both were in nebulous states of legality globally, and both were generally otherized by traditional society. As queer cannabis writer Sophie Saint Thomas put it in a 2019 interview with Rolling Stone:

“Cannabis and queers have always shared in the fight for respect and legal recognition, which inherently links the two communities”

Cannabis has long been associated with progressive protest movements—the joint being a staple in the anti-war protests of the 1960’s. In the context of this tradition, it makes sense that the push for legalization and the push for gay rights not only occured simultaneously, but in fact fueled one another.

History of Activism: Where Gay Rights Intersected With Legalization

The truth is, without the tireless work of LGBTQIA+ activists during the height of the AIDS/HIV epidemic, there would be no cannabis legalization. Abandoned by the federal government, and faced with ineffective treatments that often produced horrific side-effects, the gay community turned to cannabis for relief. It was this dire necessity for respite that drove queer activists to also fight for legalization.

One such figure who emerged during this time period was Dennis Peron, a man who is now considered to be the father of the medical marijuana movement. Dennis’ fight for cannabis legalization began in the Castro District of San Francisco during the 1970s, where he organized smoke-ins to protest the prohibition of marijuana. However, soon Dennis’ passion for activism greatly intensified. In 1990 Peron’s partner Jonathan West tragically died from AIDS. For years Peron watched as cannabis had helped assuage the terrible symptoms the virus produced in his loved one, and in 1991, one year after West’s death, Peron founded what was effectively the first dispensary—the San Francisco Cannabis Buyers Club.

In 1996 Peron co-authored the infamous Compassionate Use Act, also known as Proposition 215. which allowed for the use of medical marijuana. Proposition 215 passed with 55% of the vote, making it the first medical marijuana initiative to be passed at the state level. The success of the Compassionate Use Act in the face of federal prohibition set off a chain reaction that took place all across North America, and laid the foundation for the legalization efforts we now benefit from in the US and Canada.

Dennis Peron’s activism made a tangible difference by passing legislation and getting medicine into the hands of the sick people who needed it. But Peron did more than that—he inspired the people around him to take up the cause.

Thanks to the San Francisco Buyers Club, activist Paul Scott was able to procure cannabis to help treat his HIV. When the SFBC was eventually shut down, Paul went on to serve as one of the first board members of the Oakland Cannabis Buyers Club, which was modeled after the SFBC. Paul saw the importance of getting medicine into the hands of underserved African-American communities, and went on to start his own dispensing collective in his hometown of Inglewood. In 1999 Paul started the Inglewood Wellness Center to address the cannabis needs of Southern California, which faithfully served the community until 2013. Paul Scott remains an activist to this day, currently serving as president of the Los Angeles Black Gay Pride Association.

We’ve come a long way since the ‘90s in regards to both the gay rights and cannabis legalization movements, but now’s not the time to rest. We still have a long road ahead of us. Cannabis continues to be federally listed as a Schedule I drug, and more than seventy countries still criminalize homosexuality.

As the fight continues, so does the intersection of the two communities. Kush Queens has recently partnered with Asylum Connect, promising a donation of 25 thousand dollars to help further their cause.

Asylum Connect is a nonprofit that is using technology to help refugees who are fleeing countries where they are persecuted for their sexual orientation or gender expression find safe navigation.

It’s important to remember activist burnout is a real thing. We have to find the time to practice both community care and self care. Look to the Kush Queen Pride Collection to find great products to help you unwind so you can keep up the good fight.

Relax with their glitter bath bomb. The eco-friendly holographic glitter will make you feel like a queen while you enjoy soaking in the alleviating embrace of 100mg CBD. These full-spectrum bath bombs were designed with the entourage effect in mind, and the essential oils perfectly complement the natural occurring terpenes found in hemp-derived CBD.

Or enjoy the titillating effects of the Kush Queens Pride BIG Lube Energy. This water-based CBD infused lubricant is perfect for both men and women. Because water-based lubes are safe-sex approved for latex condoms, Big Lube Energy can be used with any condom, or with any toys.

If you’re just looking for some no-frills, high-quality CBD, look no further than the Kush Queens Pride GummiesRX. Each gummy contains 25mg of premium CBD, and offers an easy way to chill out.

Enjoy the latest and greatest from Herb, enter your email below to get exciting cannabis updates delivered to your inbox.
July 30, 2020 — Last Updated October 13, 2020
Written by Vinnie Sarrocco