What Is Live Resin & What’s The Best Way To Use It?

With the newest lab tested methods of a “live resin” extraction things have taken a turn for even more medicinally beneficial highs and top-end potency to bare. 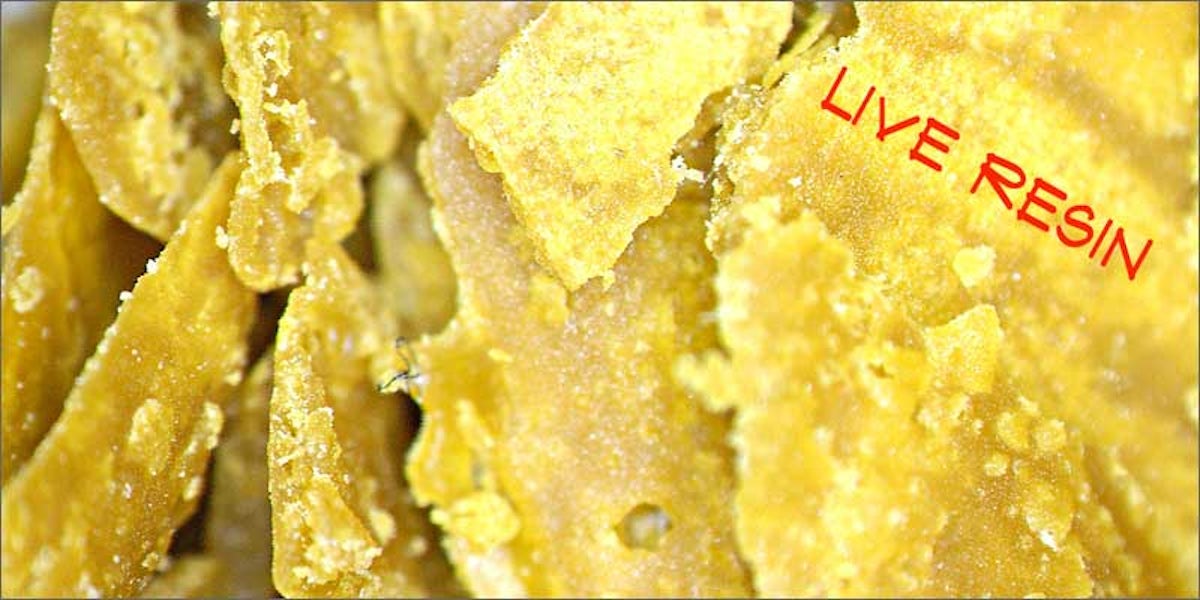 Some of the newest and safest means of cannabis administration are methods of smoking cannabis extracts, or concentrates. These include dabs, waxes, glass, shatter, pressed hashes, budders, and any other types of BHO or CO2 extracted concentrate forms of the plant. But now, a new method is being seen to provide the highest in trichome content, loaded with cannabinoids and flavorful terpenes, to insure the best medicine and stone available. So what exactly is Live Resin?

In order to get Live Resin, a freshly harvested cannabis plant is immediately flash frozen. Currently, this is only being done in scientific laboratories with specialized equipment where the plant is cryogenically frozen. This process of plant freezing captures the living plant resin, rendering the fullest potencies of the plants cannabinoids and terpene content.

By cryogenic freezing of the plant, its medical efficacy is captured in its fullest, delivering the best of its aromas, flavors, and potency. Because much of the plant loses a significant potency during its curing process (drying) this new freezing method will capture the highest possible potential for medicinal effect – including a stronger psychoactive effect and medicinal benefits of other cannabinoids among THC and pain relieving properties.

“As much of 60 percent of a plant’s terpene content is lost during the drying process.” -Kenneth Morrow, author Handbook of Essential Oils

There is a certain period in which the plant yields it greatest potency. However this is a touchy process, and during the stages of drying a fresh plant the terpenes and other cannabinoids are often lost. By a low-level freezing method of the plant, when these are at their highest, they are locked into the plant where they can be extracted at full potential.

When the terpenes are frozen at top capacity they will yield the highest flavor content and their peak aromas. “One gram of live resin equals the aroma of “a whole bag” of weed,” says Addison Demoura with Steep Hill Labs.

The live resin is made by either a BHO (butane) or CO2 extraction process in a closed-loop method, then solvents are purged by low-heat oven over several hours to days.

Live resin is also more sappy, liquid-like than most other concentrated forms.  Another major difference in it than other concentrates is that it is rare to find, as it takes special laboratory equipment and freezing chambers to make. This is not a process that one could simply do at home, and thus, it is rarer to find, as well as more expensive. It is sure to be prized among the concentrate connoisseurs of the cannabis world- if they can happen to get their hands on some.

Live resin’s potency is anywhere from between 65 – 90% pure THC and in just one inhale users can expect to have inhaled the likes of an entire joint. The medical benefits come in large due to the fact of little inhalation of smoke for greater medicinal pain relief and lasting effect.

It won’t be long as time goes on for the legal states to carry Live resin at many of the local recreational and medical dispensaries.