Why Does Weed Make You Tired? Here’s What You Need To Know

We dive into the science of weed and sleep to find answer the question: why does weed make you tired?
August 13, 2019
Written by Anna Wilcox 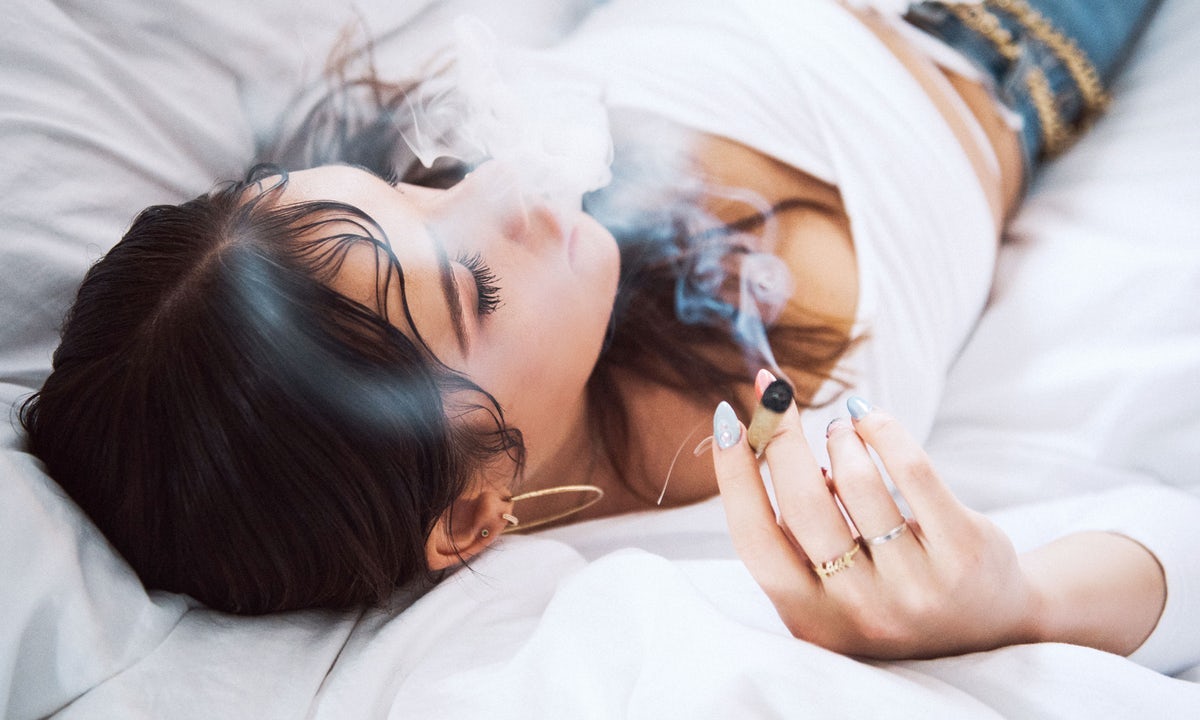 Move over Ambien—there’s a better sleep remedy in town. Insomnia and struggles with sleep are among the biggest reasons why consumers turn to cannabis. After all, the herb is famous for its hypnotic and relaxing effects. As what might come as a surprise to no one, the plant also has a long history as a natural sleep aid. In fact, knowledge of the herb’s sedative effect may even date back to as early as 1,500 BCE, when Aryan settlers began migrating through the Indus Valley. At least, according to pharmacologists writing in the 1950s. But, why on earth does weed make you tired? Only science can get to the bottom of such an essential question.

Reasons Why Weed Makes You Tired

Can weed make you tired, really? The answer is yes, and for several good reasons. As it turns out, there is more than one way that the plant can cause heavy eyelids. Various chemical compounds in the herb engage with cells in the human body, creating chemical interactions that  Sound confusing? Let us explain; here’s why cannabis makes you tired:

Tetrahydrocannabinol (THC) is the primary compound that causes the cannabis plant’s famous psychoactive “high”. Yet, this compound may also be the culprit behind some of the herb’s sedative effects. THC hijacks the landing sites for other natural compounds that help regulate the body’s biological clock and pleasure centers. Specifically, the psychoactive mimics compounds that may interact with, at least in part, the sleep chemical melatonin. It also changes the concentrations of the pleasure and attention hormone, dopamine.

Let’s look at melatonin first. Melatonin is a neurotransmitter that tells you when its time for bed. The body ramps up melatonin secretion as the sun goes down and decreases its production throughout the day. While research on cannabis and melatonin is admittedly a little sparse, an early 1986 study suggests that THC may increase the release of melatonin shortly after consuming, with a peak melatonin concentration about two hours after inhaling the psychoactive herb. While some research suggests that the effect of cannabis on melatonin may be more complicated than this early study suggests, a boost in melatonin may be one of the reasons the herb causes drowsiness during odd times of the day.

THC’s effects on dopamine are more clear. Dopamine is a neurotransmitter that allows you to feel pleasure from activities like sex, eating, and other enjoyable activities. Yet, the neurotransmitter also has a serious side. Dopamine also lends a hand in attention and drive. It’s dopamine that helps you stay on task and get things done. In low doses, THC can cause a pleasurable dopamine spike. If you consume the herb a little too much for too long, however, research suggests that the plant might contribute to an overall decrease in dopamine. For this reason, you may find yourself a little tired and unmotivated after overdoing it with the THC. Your best bet for avoiding feelings of fatigue after smoking? Consume in moderation.

There’s more to cannabis than just THC. Even some high-THC strains are more sedative than others. So, what gives? The answer to that question is pleasing to the nose. The cannabis plant can produce over 200 aroma molecules, called terpenes. It is the unique combination of these molecules that gives each cannabis strain its individual personality. As luck would have it, the cannabis plant features a large number of sedative terpenes.

There’s some research to support this claim. In a 2002 study, researchers tested the effects of myrcene and two additional terpenes on mice. When treated with myrcene extracted from the Lippa alba plant, the mice slept an average of 2.6 times longer than untreated mice. The rodents were given 200 milligrams of the terpene per kilogram of body weight.

The same study also found that a dose of myrcene 10 milligrams per kilogram of body weight seemed to relax motor function. In high doses, however, the terpene did show a slight potential to cause anxiety in the rodents, a quality that is also present in potent cannabis strains.

Yet, myrcene isn’t the only sleepy aroma molecule found in the cannabis plant. Other terpenes may also cause feelings of sedation as well, including:

Many people find that cannabis can have an energizing or alerting effect, providing enough mental stamina to get through the day. But, even the most energizing strains can cause a little fatigue as the active effects begin to wear off. Part of why this may be the case may be because of melatonin. Well, if the aforementioned study is worth its weight, that is.  In the study, participants demonstrated a spike in melatonin shortly after their first inhalation of cannabis.

It wasn’t until two hours later, however, that sleepy melatonin reached its peak concentration. The effects of inhaled cannabis last about two hours in general. So, even if cannabis if a cannabis strain provides an energy boost initially, sleepiness may kick in as the effects of the herb begin to wear off.

Weed Strains That Make You Sleepy

Whether classified as an indica or a sativa, cannabis plants that produce large amounts of sedative terpenes are more likely to make you sleepy. If you’re trying to find plants that may beneficial for sleep, cannabis cultivars that produce a higher myrcene content are likely your best bet. While not all cannabis suppliers test and list myrcene levels, here are a few strains that will likely do the trick:

Hoping to stay awake? Consider opting for strains that include some cannabidiol (CBD). In many ways, CBD is the opposite of THC. The former is non-intoxicating, meaning that it won’t cause a euphoric high. In low to moderate doses, CBD is expected to have alerting properties. In higher doses, however, the plant may cause drowsiness like THC. Picking up a high-CBD strain or a plant that contains both CBD and THC will likely do more for keeping you awake than simply opting for an indica or sativa plant.  Here are some high-CBD strains worth considering:

Check out the Herb Shop for everything you might need for a smoke, or vape, sesh, like the Mighty Vaporizer from Storz & Bickel.

How to Avoid Getting Tired After Smoking Weed

If you’re feeling tired and sluggish, there are a few quick remedies that may lend a helping hand. Here are some top tips to get you back in working order:

Exercise is a natural energy booster that delivers more oxygen to the heart and lungs. A study published in the Psychotherapy and Psychosomatics Journal in 2008 found that regular exercise increased an individual’s energy levels by 20 percent and decreased fatigue as much as 65 percent.

Regular exercise may also help you sleep more soundly, which means that your sleep quality will be enhanced and that can only boost your waking energy. Many people report that exercising while high not only extends the high for a longer period of time, but it has also been shown to have positive effects on muscle fatigue and muscle strain and inflammation.

You certainly don’t have to get stoned in order to reap the full medicinal benefits of cannabis. Consuming too much weed is not only a recipe for couchlock, but it can also bring about anxiety-inducing effects that can leave you otherwise unable to function.

More and more studies suggest that the smallest therapeutic dose of cannabis you can take, the better it works. So, if you’re utilizing the plant regularly, it may be worthwhile to take a tolerance break or gradually lower the amount you are consuming.

As mentioned above, CBD can have alerting effects in low to moderate doses. CBD can also mitigate some of the undesirable side effects of THC. Thus far, research suggests that the non-intoxicating compound can lessen the psychoactivity of THC. It may also decrease visuospatial memory impairments caused by the psychoactive, which may make you to forget things like where you set your keys or where you parked your car. Finally, CBD also seems to counteract some of the appetite-inducing effects of THC.

Unless you’re prone to anxiety or panic disorder, drinking coffee or green tea can give you a quick boost of energy if weed has you feeling tired. Sometimes dubbed “a poor man’s speed-ball”, many people rightfully assume that mixing caffeine with weed confuses the body since one is a stimulant and the other is a depressant.

However, a 2011 experimental study found that caffeine enhanced the memory-impairing effects of THC in animals and in cell cultures. In fact, caffeine seemed to compliment THC so well that less THC was needed to achieve the same results of the original dosage of just THC alone.

While the research hasn’t been tested in humans, if you can get the same effects using less THC when caffeine is involved, what a great way to give yourself a little pick-me-up! If you’re hoping to avoid falling asleep, finding ways to limit your THC consumption is usually a good idea.

Does Marijuana Make You Sleepy The Next Day?

To put it bluntly, yes, cannabis can make you sleepy the next day. Culturally known as a “weed hangover”, feeling a little sleepy the day after consuming cannabis is a common phenomenon. This is especially true if you enjoyed the plant before going to bed or if you have hit the herb a little too hard the day before. Studies conducted back in the mid-1970s suggest that the psychoactive plant may increase the amount of time you spend in deep sleep, which is the phase of sleep essential for muscle restoration and long-term memory consolidation.

At the same time, multiple studies have found that the herb decreases the time spent in the final sleep stage called rapid eye movement (REM) sleep. REM sleep usually occurs in the period before waking, when brain waves begin to increase and dreaming occurs. By decreasing the amount of REM sleep you experience, you are more likely to wake up before your body is prepared to wake. For example, if your alarm goes off and you happen to wake during this deep sleep phase, you may find it particularly difficult to drag yourself out of bed. A person is most difficult to wake when they are in the middle of slow-wave deep sleep.

Both sleep stages are essential for repairing the body and preparing for the following day. When these normal sleep cycles are disrupted, there is a greater chance for poor quality sleep or increased sleepiness the next day. If you consumed quite a bit of cannabis the day before, then it is also possible that there may still be some leftover amounts of THC circulating in the blood and lymphatic systems. After a solid night of lighting up, you can expect some fatigue and lethargy to linger.

August 13, 2019
Written by Anna Wilcox
Ready to join the movement?
Enhance your brand's profile by claiming your brand