Now Reading:Learn | Sativa 101: All You Need To Know 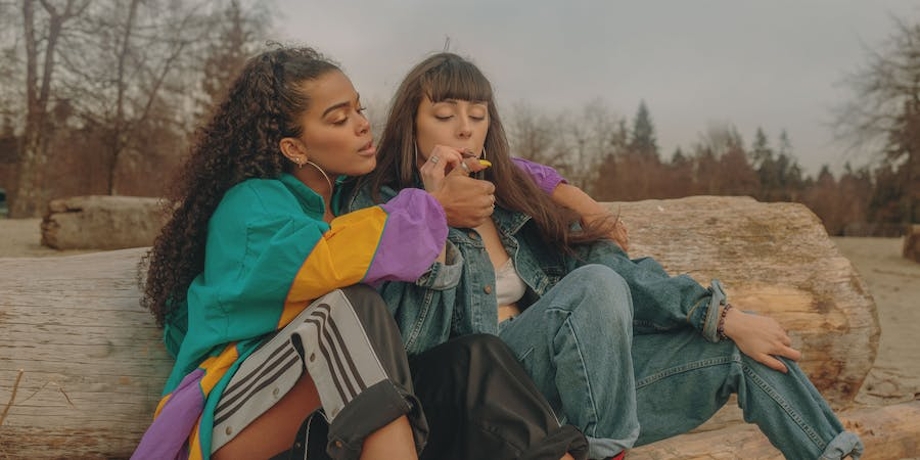 A BRIEF GUIDE TO KNOW EVERYTHING ABOUT SATIVA. WHERE IT COMES FROM, ITS EFFECTS, BENEFITS, RECOMMENDED FLOWERS AND MORE.

If you are a beginner in the subject of cannabis or simply want to know a little more about this incredible strain, here we make a small guide for you to do so. A guide to understand everything you need to know about sativa strains.

By this point you should know that there are many different types of marijuana strains available. With so many options, it can be overwhelming and seemingly impossible to know where to start.

When trying to determine which strain of marijuana is ideal, it is best to first understand that there are generally three different types of classifications: sativa, indica, and hybrids.

When purchasing a strain, you will find that the marijuana flower is often labeled as sativa, indica or hybrid, depending on which strain’s characteristics are more dominant or if they are balanced.

What is Cannabis Sativa? 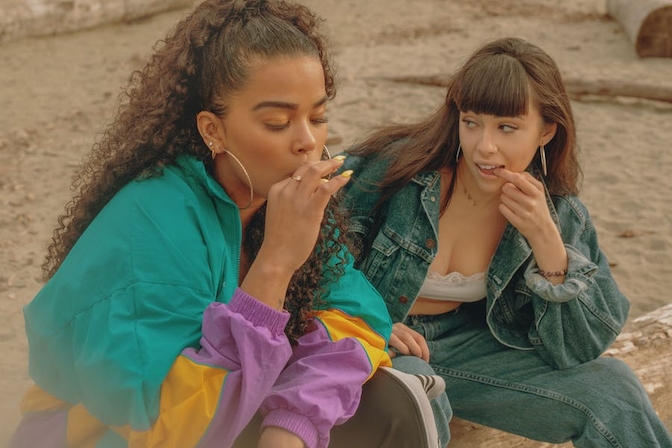 Cannabis sativa is a species of the Cannabaceae family that includes both marijuana and hemp varieties. Sativa strains tend to thrive in warmer climates, with most strains originating in countries such as Colombia, Mexico, Thailand and Southeast Asia.

Cultivated throughout history, cannabis sativa is harvested for its fiber, seeds and oil, which have historically been used for industrial, nutritional and medicinal purposes.

Sativa strains are known to be extremely pungent due to a distinct terpene profile that produces aromas that can range from fruity, citrusy and sweet to earthy, piney and peppery.

The sativa leaf is typically thin and resembles the iconic marijuana leaf we have all come to know. These plants are compatible with homework, socializing and creative activities, such as making visual art, writing or playing music.

Long known as the daytime choice for cannabis enthusiasts, the consumption of Sativa strains can be compared to caffeine intake. Sativa provides many users with what is described as a “mental high.” Sativa strains tend to have more CBD than indica strains and will give you an energy boost after consumption. 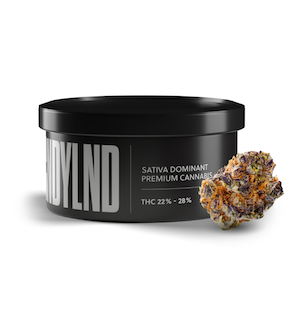 Perfect for moderating pain, muscle tension, and sour moods. CNDYLND offers uplifting and stimulating effects, with peak energy culminating in the chaos of creativity. It is the functional embodiment of wake & bake.

CNDYLND promotes creativity and euphoria making it a perfect strain for social gatherings or creative pastimes. Its main grounds are Humulene and Myrcene. 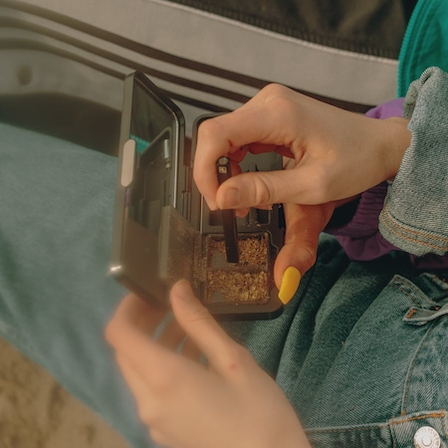 The uplifting Sativa high is more cerebral than the Indica high, which is described as more of a body high. Its stimulation is perfect for anyone who prefers to consume cannabis during the day.

But, for some people, the soaring mental stimulation and racing thoughts associated with Sativa weed can actually increase anxiety. That’s why people who are prone to anxiety attacks often choose Indica strains instead.

Some of the pulse-pounding Sativas like Jack Herer, Trainwreck and Green Crack are beloved by their fans for those mental fireworks, while avoided by others because they find them a little too stimulating.

The stimulating nature of cannabis sativa makes it a strain best suited for daytime use, social situations or artistic endeavors.

Some of the main effects experienced when consuming sativa are:

The mental zing associated with Sativa weed makes it ideal for creative pursuits. Those euphoric, racing thoughts enjoyed by many with the Sativa high mean that it can foster new ideas and creations.

It can also increase focus. These strains can be very helpful in fighting depression, fatigue, and mood disorders. There’s absolutely nothing like a jolt of cannabinoid-induced mental energy to get you out of the doldrums.

Thanks to their uplifting effects, sativa strains are often used to treat emotional disorders such as depression. Other medicinal uses of sativas include:

How To Spot A Sativa 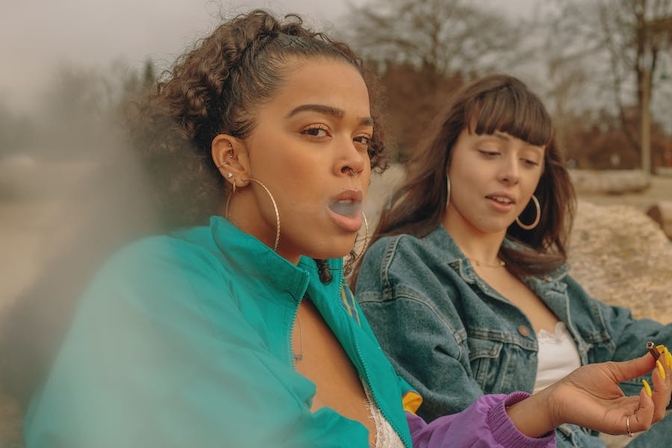 Sativa plants are tall and thin, and their buds are looser and lighter than their indica counterpart. When a sativa plant blooms, its flowers form along the branch and seem ‘stretched out.’ As a result, you end up with buds that are not particularly dense. Also, sativa plants tend to flourish in warm climates. This means they often have deep red or orange color accents on the buds.

Although there are hundreds of sativa strains available today, below are some of the most popular strains today. The sativa team has a lot of all-stars, including many of the most iconic and legendary strains in cannabis history.

Panama Red and Acapulco Gold are two of the head-ringing strains which made a big splash in the 1960s. Both quickly attained mythic status among hippies for their legendary potency, with mental effects that could be almost psychedelic.

Commonly known as “Sour D”, the Sour Diesel sativa strain offers around 19% THC and provides users with an uplifting yet dreamy cerebral high. It is also a popular choice among medical marijuana patients trying to control restlessness, malaise and mood problems.

Durban Poison, which emerged from South Africa, became known as one of the most potent weeds in the world in the 1970s, while Hawaiian, with its one-toke potency, quickly spread its fame beyond the islands and across the globe. Durban Poison, which will light up your brain with a euphoric electricity, remains one of the few unadulterated Sativa strains widely available.

Jack Herer is a sativa strain named after the man Jack Herer, who is a marijuana activist and author of the famous book The Emperor Wears No Clothes. Jack Herer is a pungent strain that smells like pine and makes users feel an overwhelming sense of happiness, giving them a clear head that is ready to tackle a creative project.

Trainwreck offers an intense head high, and while that is prized by its devotees, it’s not recommended for anxiety-prone smokers. Cognitive effects, though, are very dependent on the individual, and some anxiety patients do like it. Jack Herer, one of the most iconic cannabis strains, is reminiscent of Trainwreck and is named to the legendary author of The Emperor Wears No Clothes, the book many consider the Bible of the hemp movement.

Modern Sativa-dominant hybrid strains include Amnesia Haze, which offers a tremendously potent Sativa high, and Girl Scout Cookies which originated on the west coast as a hybrid of the Indica OG Kush and the Sativa strain Durban Poison.

Super Lemon Haze is an energizing sativa strain with 18% THC. A sativa-dominant hybrid, smells and tastes sour and sweet, like a lemon. Users can expect to feel a jolt of energy after use, making it perfect for consumption before a night out or at the start of an adventure.

The Sativa plant is primarily grown outdoors as there aren’t many growers who can accommodate the plants size in a grow room. The Sativa plant often increases in height very rapidly when in the vegetative phase of growth.

Another factor which leads to more outdoor growing is the long flowering time of Sativa weed. While Indicas usually finish flowering by 60 days, and often by 45 days, Sativas need a minimum of 60 days and sometimes up to 90 days to truly finish blooming. As a result, it costs a lot more to run those power-hogging grow lights for 12 weeks rather than eight.

Sativa leaf blades are generally narrower than Indica leaf blades, although the modern process of hybridization means you’re not likely to identify a Sativa vs Indica at first glance.

Since these strains were originally developed in equatorial climates, they are more naturally adapted to outdoor growing locations in places like Southern California, Arkansas, and Florida, but connoisseurs have been known to grow them around the world. The high is just so desirable, every aspiring cannabis farmer seemingly wants to try his or her hand at growing Cannabis Sativa. That’s why, despite its lanky profile and long flowering times, you can find it in greenhouses and grow rooms everywhere.